The Australian supermarkets and grocery stores sector is competing actively on the price front for a share of the $100bn market, says ‘Bankwest Future of Business: Focus on Supermarkets’ Report released by a subsidiary of Commonwealth Bank of Australia (ASX: CBA), Bankwest. The intense competition between supermarkets is putting downward pressure on the prices, said the report.

According to the report, online supermarkets are the rapidly growing part of the sector that is forecasted to grow by 75.9 per cent over the next five years. The report mentioned that the recent growth of online grocery shopping and private-label brands is changing the landscape of the Australian Supermarket industry. Western Australians were found to be the biggest spenders on online groceries because of the state’s more restrictive trading hours. Also, the household income in the state is 10.9 per cent above the national average, rising by 0.7 per cent in the last year.

The size of the supermarkets and grocery store market in Australia is projected to grow by 2 per cent each year to June 2024.

The report provided the following distribution on the market share of Australia’s supermarkets and grocery stores: 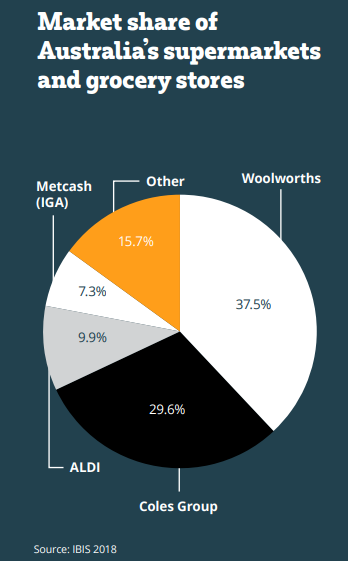 According to the USDA Foreign Agricultural Service Report, ‘2019 Food Processing Ingredients’, the domestic fruit and vegetable processing industry of Australia has been struggling with fierce competition over the past five years. Also, the Australian Supermarkets and grocery stores are among the major buyers of processed fruit and vegetables. The Australian food retailers, Coles and Woolworths that are dominating the supermarket industry, have encouraged growth in cheaper imports by expanding their private label offerings.

The report mentioned that the value of food and liquor retailing in Australia increased by 3 per cent in 2018 to USD 124 billion. Also, the bulk of food retailing purchases (69 per cent market share) were done by supermarket and grocery stores in Australia.

Is Australian Retail Sector under Threat?

In its Monthly Business Survey for May 2019, the economists of National Australia Bank Limited (ASX: NAB) found the retail sector “clearly in recession”. The economists highlighted that the conditions in the retail industry have fallen to a level not observed since the global financial crisis. The retail trade data for April 2019 announced by the Australian Bureau of Statistics also indicated that the retail sales fell unexpectedly in Australia by 0.1 per cent in April.

A recently released report by the Reserve Bank of Australia, “Competition and Profit Margins in the Retail Trade Sector” mentioned that the net profit margins for both food and non-food retailers have declined over the recent years, reflecting a decline in firms’ pricing power as they continue to compete for sales and market share.

Now, let us know more about the major supermarket chains listed on the Australian Stock Exchange below:

As cited above in the article, the supermarket chain Woolworths Group Limited (ASX: WOW) enjoys the maximum market share in the supermarket industry. The Group operates ~995 stores across Australia and provides superior range value, service and convenience to its customers. It is one of the most innovative retailers of Australia, offering the customers a facility to shop through the Woolworths Supermarket App.

Why Woolworths Group is in News?

In a recent announcement on the ASX, the Group informed about its intention to separate Endeavour Group following the combination of Endeavour Drinks and ALH Group (ALH). WOW is planning to merge ALH with its drinks and hospitality businesses- Endeavour Drinks by the second half of the calendar year 2019. The merger will be followed by a separation through a demerger or other value-accretive alternative, expected to take place in the calendar year 2020. 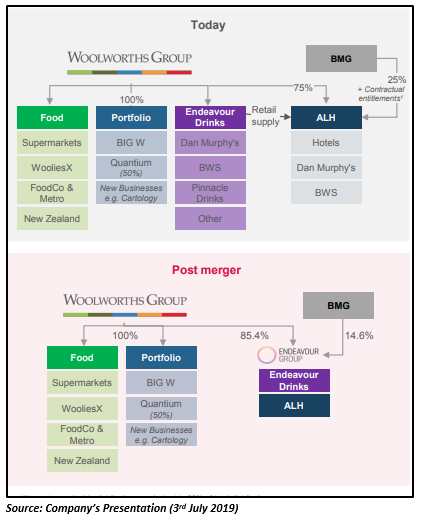 Considering the future prospects of drinks and hospitality businesses, the Woolworths Group has decided to separate the two businesses in the calendar year 2020. Post this, WOW is likely to gain benefit from a much simple structure of the company. The separation of the two businesses would enable WOW to concentrate more on its core food and daily requirements of the markets, and Endeavour Group to realise its full potential.

The Group released its financial results for the 27 weeks ending 30th December 2018 in February this year. The sales and EBIT of the Group from the continuing operations improved by 2.3 per cent and 1.0 per cent in H1 F19 relative to the prior corresponding period. The Group NPAT was also 1 per cent up to $979 million. 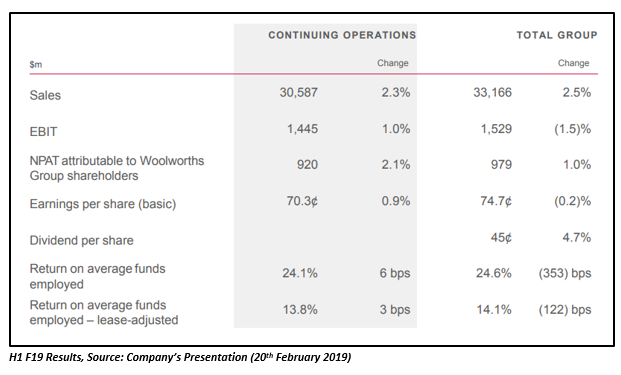 The Group’s stock ended the trading session at AUD 34.31 (as on 5th July 2019), up by 0.734 per cent relative to the last closed price. WOW is also among the top five best-performing stocks trading on the S&P/ASX 200 index currently. Around 1.6 million number of the Group’s shares traded on ASX. The stock has delivered a return of 13.28 per cent on a YTD basis and 6.24 per cent in the last three months.

A leading retailer of Australia, Coles Group Limited (ASX: COL) seems to be a winner in online food and drinks space with an optimised store and supply chain network. The Group is a national full-service supermarket retailer that is operating in over 800 supermarkets.

In a recent announcement on ASX, the Group announced its refreshed strategy with an aim to become the most trusted retailer in Australia. The Group informed that it wants to sustainably feed all Australians to help them lead happier and healthier lives. The Group’s strategy was based on three pillars:

On 26th March 2019, the company partnered with Ocado Group plc to offer leading online grocery shopping experience to Australian customers, making their lives easier. The Group wanted to bring the leading online grocery platform of the world, home delivery solution and automated single pick fulfilment technology to Australia before the end of the 2023 financial year.

In February this year, the Group released its financial results for the half year ending 30th December 2018. The Group reported a 46th consecutive quarter of supermarkets comparable sales growth with its sales improving by 2.6 per cent. However, the Group EBIT was down by 5.8 per cent to $733 million during the period. 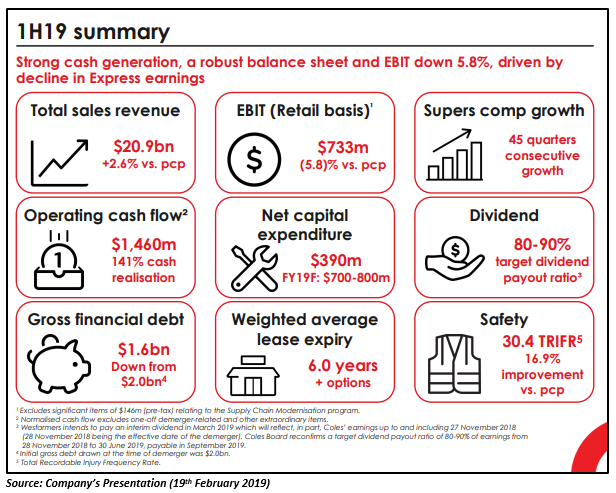 On 24th June 2019, the company declared its full-year results and financial report for the year ending 30th April 2019. The Reported Group revenue of the company excluding “charge-through sales” was up by 1.8 per cent to $12.7 billion. The Group revenue (including charge-through sales) also improved by 1.4 per cent during FY19 to $14.6 billion. The company declared a Statutory profit after tax of 192.8 million dollars in FY19 against a loss of 148.2 million dollars reported in FY18. However, the Underlying profit after tax declined 3 per cent to $210.3 million. 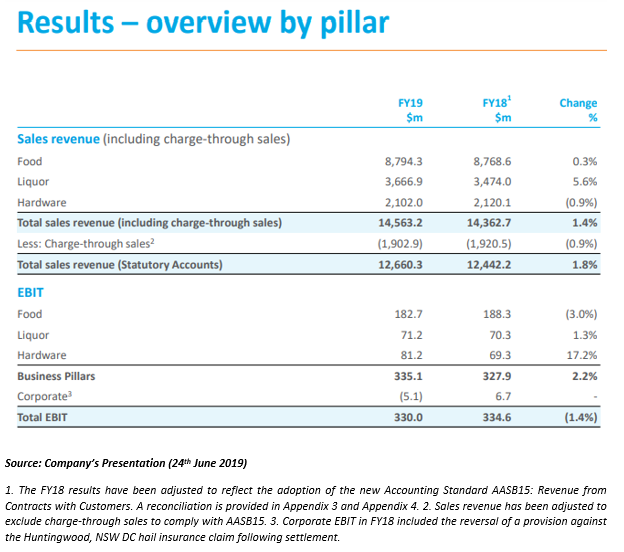 On 5th July 2019, MTS’ stock last traded at AUD 2.770 with a gain of 1.465 per cent compared to the previous closed price. Around 3.07 million shares traded during the trading session, with a market capitalisation of AUD 2.48 billion. The stock has generated a return of 14.71 per cent on a YTD basis.