Counted amongst the top countries of the world for technological readiness, Australia is known for its steadily growing services and technology sectors. The country’s transition to a services-based economy is driving the development of new technologies in education, health, agriculture, financial services, among other sectors. Australia is currently commercialising and developing new disruptive technologies in a range of sectors. As per Austrade’s Australia Benchmark Report 2019, the country has around 700 Fintech start-ups, 500 Medtech companies, 350 Edtech companies and 300 Agtech and Foodtech companies.

The technology sector of Australia is one of the strongest sectors, that has grown substantially over the years. The S&P/ASX 200 Information Technology Index has delivered a return of more than 30 per cent in 2019 so far (calculated till 23rd September 2019).

There are multiple Australian companies engaged in the information technology sector that are listed on the Australian Stock Exchange (ASX). Let us discuss five of them in some detail below:

An ASX-listed software company, ReadyTech Holdings Limited (ASX: RDY) offers mission-critical people management software for facilitators, employers and educators of career transitions. The company holds around 20 years of experience in employment and education that enables it to deeply understand its customers’ businesses and needs.

During FY19, the company reported a rise of 27.7 per cent in its revenues from ordinary activities to $32.7 million, and an increase of 13.5 per cent in its pro forma revenue to $33 million. The company’s pro forma EBITDA was 1.5 per cent ahead of prospectus forecast and 20.8 per cent up on FY18, at $12.8 million during the period.

A MedTech SaaS company, Volpara Health Technologies Limited (ASX: VHT) was founded ten years ago on research originally conducted at Oxford University. The company’s technology and services have been used by research projects and/or customers in thirty-eight countries and are supported by numerous trademarks, patents, and regulatory clearances, including CE marking and FDA clearance.

The company released its quarterly results for the June 2019 quarter in July this year. The company’s cash receipts from customers for Q1 rose by 137 per cent to NZ$2.3 million. The company had a cash balance of NZ$39.9 million as at the end of the quarter. The below table summarises the key financial metrics reported by the company:

VHT is currently trading at $1.515 (as at 2:52 PM AEST on 24th September 2019), with a fall of 1.3 per cent relative to the last closed price. The stock’s market cap was recorded at $334.73 million, with approximately 198k shares in rotation. The stock has generated a substantial return of 213.75 per cent since it commenced trading on the ASX.

A global SaaS provider, Whispir Limited (ASX: WSP) was founded in 2001 to deliver a communications workflow platform that automates communication between people and businesses. The company’s products enable organisations to strengthen their communications via automated communication workflows to ensure shareholders receive timely, useful, accurate and actionable insights in a manner that is responsive to individual preferences and contexts.

The company has recently progressed its expansion into the North American market via new channel partner collaborations, new product innovations, AWS Partner certification and a new contract with US healthcare company. 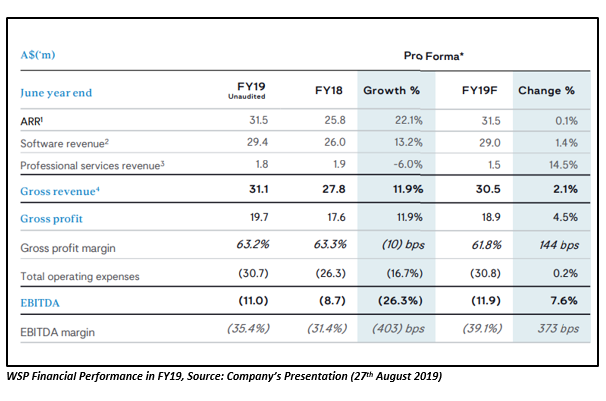 Recently, the company has secured a 3-year contract for $2.8m total contract value with US-based Nike, Inc for a retail deployment.

The company announced its financial results for the 12 months ended 30 June 2019 in August this year. The revenue of the company from ordinary activities improved by 51 per cent on pcp to $19.9 million during the period. The loss of the company attributable to its members was 38 per cent down on pcp at $4.13 million.

The company’s Annualised Recurring Revenue and Subscription revenue grew by 52 per cent and 60 per cent to $23.4 million and $18.5 million, respectively in FY19. 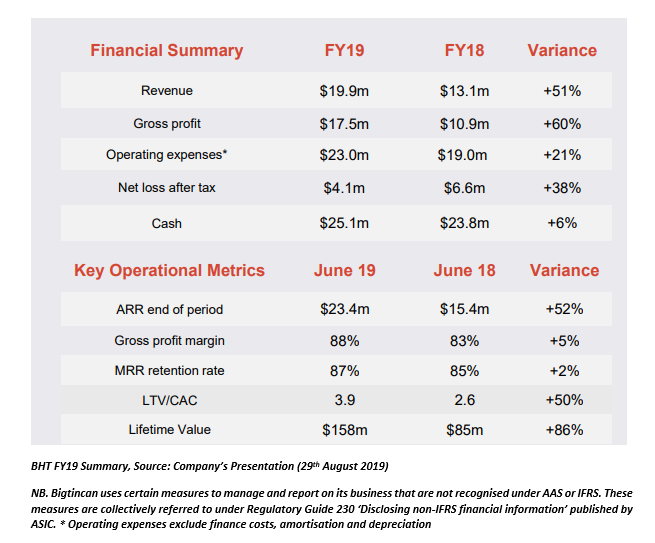 A New York-headquartered global monthly instalment payments solution business, Splitit Payments Ltd (ASX: SPT) is a payment method solution that allows its customers to make payment for their purchases with their existing credit or debit card by dividing the cost into fee-free monthly payments and interest, without additional applications or registrations.

Recently, the company announced that its Chief Executive Officer post would be taken by the company’s Managing Director, North America, Brad Paterson from 1 October 2019.

The company reported strong growth across its key operational performance metrics during the half-year ended 30 June 2019. The company recorded a growth in Active Merchants, Unique Customers (shoppers) and Total payment volume by 121 per cent, 228 per cent and 134 per cent, respectively on pcp. The revenue of the firm from continuing operations also improved by 193 per cent on pcp, to US$798k. 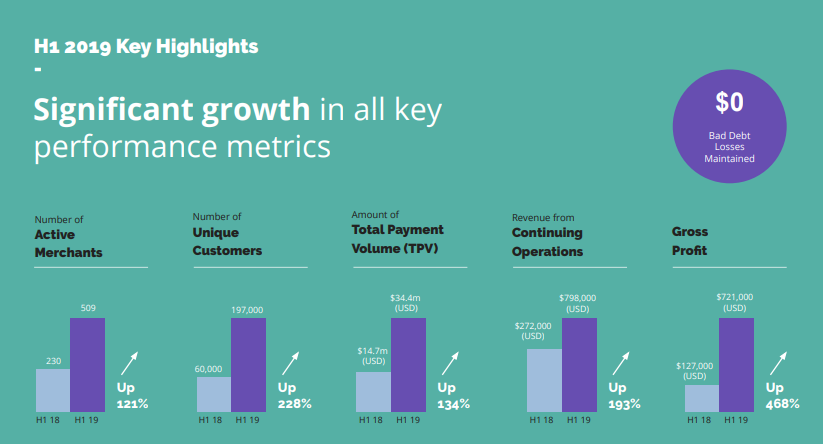 CLICK HERE FOR YOUR FREE REPORT!
Tags:
Blog VHT SPT BTH RDY WSP
All pictures are copyright to their respective owner(s).Kalkinemedia.com does not claim ownership of any of the pictures displayed on this website unless stated otherwise. Some of the images used on this website are taken from the web and are believed to be in public domain. We have used reasonable efforts to accredit the source (public domain/CC0 status) to where it was found and indicated it below the image.