The metals and mining sector consists of more than seven hundred entities engaged in the activities like exploration, production and development of minerals. It is one of the biggest sectors containing various diversified resource entities. One of the oldest sectors, since the middle of nineteenth century, it has been a substantial contributor to the economy of Australia. Moreover, the country is the biggest exporter of alumina, bauxite, coal and such resources.

Gold investment has been a secure option for investors especially during the time of market instability. Valuable metals like gold and silver have been popular among investors for a long period of time. The investment in gold can be made either by buying stock in gold miners, ETFs, or by buying physical product. Investment in the gold stocks can also add diversification to an investor’s portfolio and are more attractive for growth investors compared to income investors. Besides, even a small increment in the gold price can result in a huge gain among the best gold stocks.

On the nickel front, it has been witnessed that it was the best performing base metal of last year, with the rising interest in nickel investment. Also, it was predicted that the demand for raw materials for EV would surge up, subsequently increasing the demand for nickel in the market. Moreover, it is one of the widely used metals on the planet, since it has variety of usage from the batteries to stainless-steel. As per market analysts, while looking at the nickel market, it is expected that with the continued demand for the nickel, it is expected to double up in the next two decades to reach approximately 4.074 million tonnes by the year 2040.

Let us now have a look at the two companies from Metals and Mining space – Westgold Resources Limited and Western Areas Limited.

On 22 January 2020, the company announced the quarterly activities report for the period ending December 2019, a few highlights of the report are as follows; 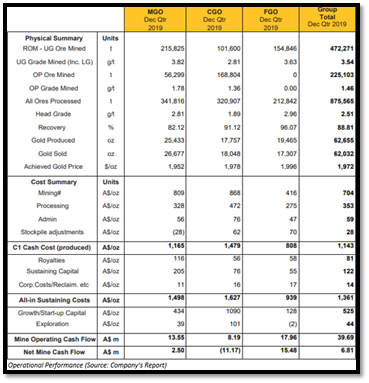 On 21 January 2020 the company announced that it has obtained screen fire assays for the high-grade intercepts at Great Fingall, which has considerably upgraded the intercept grades. The first announcement on it was previously made on 17 January 2020.

WGX believes that this drilling has been highly significant in that it proved that the stratigraphic controls to mineralisation remained in place. The high grades typical of historic production have been restored at more than twice the depth of historical mining. Besides, the Great Fingall in Western Australia was one of the biggest and richest mines at the turn of the nineteen century.

The company has further discovered new base metals in Hanging Wall. This mineralisation demonstrated a huge sulphide intercept, and was not only auriferous, but strongly bestowed with copper and zinc, making way for an thrilling new base metals exploration goal with an outcome of 6.3m at 3.71% Cu, 3.73% Zn and 0.73g/t Au from 479.76m.

The company plans additional drilling to define the up-plunge regions between historic mining and these intercepts across the ensuing year. The current open pit mining phase is expected to complete around April 2020, and underground mining is expected to exploit the gold ore systems. Further work is also planned by the company to better understand the base metal potential in that area.

On 21 January 2020, the company has announced the award of new offtake contracts with BHP Billiton Nickel West Pty Ltd and Jinchuan Co. Ltd for the WSA’s high grade Forrestania Nickel Operation concentrate product. A few highlights of the agreement with Nickel West and Jinchuan are as follows:

Time Period - A three-year contract starting from 1 February 2020 or until completion of the aggregate quantity.

After execution of new agreements, the Company’s existing agreement with Tsingshan Group will end on 31 January this year. The company has a strong commercial relationship between Tsingshan since several years.