A Hawk Eye Over Australian Labour Market And Property Market

The Australian Labour Market has experienced robust growth in jobs for several years. However, the Australian economy is presently facing several challenges and its impact can be seen on the current status of the country’s labour market. The recently released job figures by the Australian Bureau of Statistics (ABS) suggest that the economy is in a tough situation at present, facing steady unemployment.

ABS declared the labour market figures for June 2019 that indicated a marginal increase of 500 jobs (seasonally adjusted terms) during the month against the expectation of over 8000 job creation. 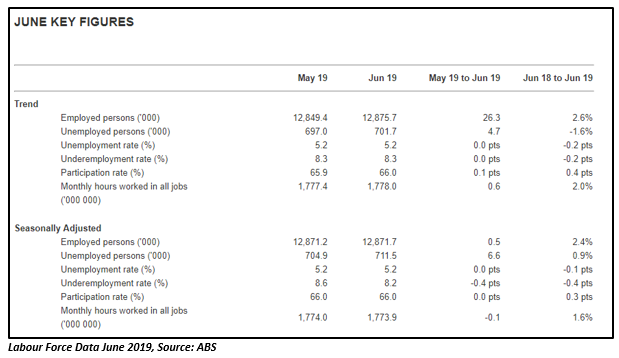 Despite a surge in the full-time employment during the month, the unemployment rate remained steady at 5.2 per cent for a third straight month. This means that there is a sign of spare capacity in the economy that is demanding more policy stimulus. The flat unemployment rate reduced the chances of the Reserve Bank of Australia progressing with the rate cut move in the short-term.

The market experts were believing earlier that the central bank is likely to keep rate cut on hold for few months and will monitor the developments in the labour market. However, the recent statement by Phillip Lowe at ‘Anika Foundation Luncheon’ signalled towards further rate dips to tackle labour market and economic concerns. The bank has recently reduced the interest rates to a historic low level of 1 per cent in order to support employment growth and help inflation reach the target.

While addressing to a Committee for Economic Development of Australia Event in June 2019, the Reserve Bank of Australia’s Governor, Mr Philip Lowe mentioned that the unemployment rate of 5.2 per cent suggests that there is a spare capacity in the economy. According to him, the Australian economy can sustain a lower unemployment rate and a higher rate of employment growth. Mr Lowe also highlighted that it is desirable and possible to lower the spare capacity in order to increase employment, reduce underemployment and boost household incomes.

Unemployment and the Housing Market

The widespread unemployment in any economy can affect the ability of individuals in purchasing new houses and maintaining the current housing expenses. This means that the unemployment promotes insecurity of tenure among house owners and leads to poor housing conditions.

It should be noted that the unemployment does not influences the property market directly rather it shares a close relationship with the market.

Let us now have a look at the Australian property market scenario that might get impacted by the recently released unemployment statistics:

Besides the labour market, the property market also plays an integral role in the growth of an economy. Most of the countries across the world generate millions of revenues from the real estate investment and businesses. The Australian property market has witnessed many twists and turns in 2019 owing to a persistent fall in property prices in the past few months. However, the market seems to have defeated the anticipated housing market slump to a great extent and is heading towards recovery, as per several market analysts and economic experts.

A recent research by a property consultant, CoreLogic showed that the property prices have improved in Sydney and Melbourne for the first time since 2017 owing to lower mortgage rates and improved sentiments. The recent cuts in the official interest rates by the central bank have boosted the confidence of the consumers in the housing sector. However, the consultant emphasized that the turnaround in the property market is yet to spread beyond Sydney and Melbourne where the house values increased by 0.1 per cent and 0.2 per cent, respectively in June 2019.

The ABS official data indicates that the property market is showing signs of recovery after witnessing a fall in house prices across all the eight capital cities of Australia in March 2019 quarter. During the quarter, the residential property prices fell 3 per cent with Sydney and Melbourne observing the largest falls of 3.9 per cent and 3.8 per cent, respectively. As per the ABS data, Adelaide and Hobart experienced the first fall in property prices of 0.2 per cent and 0.4 per cent, respectively. The property market was hit majorly by the tight credit supply and lower demand from investors and owner occupiers in the quarter. This resulted in a fall in the total value of 10.3 m residential dwellings of the country by 172.7 bn dollars to 6.6 trillion dollars.

The building approvals improved in May 2019, reversing the trend of falling approvals witnessed in March and April. The total dwellings approved rose by 0.7 per cent in May in seasonally adjusted terms with a maximum rise of 14.4 per cent seen in Victoria. However, the other cities like Queensland (-6.3 per cent), South Australia (-2.9 per cent), Western Australia (-4.7 per cent) and Tasmania (-1.2 per cent) observed a fall during the month.

Some economists believe that this rise in dwelling approvals in not enough to point to a housing market recovery. They think that the recovery is still some way off as the national approvals have reduced close to 20 per cent in the year to May. Some of them have also labelled the data as unconvincing and anticipate further rate cuts by RBA to aid the growth.

Lending to Households and Businesses – ABS May 2019 Data

Despite APRA’s move of easing mortgage lending rules, the value of lending commitments reduced by 1.3 per cent in May 2019 in seasonally adjusted terms. This follows a rise of 0.6 per cent in the new lending to households during the previous month.

Being the key drivers of economic growth, the recovery of the labour and property market is highly essential to bring back the economic growth on track. The central bank remains optimistic towards the outlook of the economy and is stimulating the growth potential by taking the necessary steps. The less stringent lending standards for home loans and lower interest rates are expected to boost the Australian economy in near future.