Potash is an industrial mineral that is used in the fertilisers. The responsible use of fertilisers is key to meet the challenge of global nutrition. Producing sufficient food for human beings is one of the bigger challenges faced by the world today. In parallel, potash is a significant source of potassium, which is found in every cell of animals and plants. It helps plants grow by improving water retention, strengthening roots and stems, resisting weeds, insects, diseases and changes in temperature.

The demand for Potash is expected to rise rapidly due to the increased grain consumption, alarming human population growth, which is projected to cross 9 billion mark by 2050 and a decrease in arable land per capita, which requires increasingly higher crop yields to keep up the pace with demand. Three relevant Australian companies, which are involved in the exploration/production/development of Potash are Australian Potash Limited, Danakali Limited and Highfield Resources Limited. Letâs see how the stocks of these companies are performing based on their recent updates.

Australian Potash Limited (ASX: APC) has an engagement in carrying out exploration on its tenements and applied for or acquired additional tenements with the objective of identifying potash and other economic mineral deposits. The company recently announced an update on the progress of the production well development program, which forms the last schedule of work in the reserve estimate for the pending Definitive Feasibility Study announcement (DFS) into the Lake Wells Sulphate of Potash Project.

Marchâ19 Quarter Key Highlights: The $4.2 million raised by the company through entitlements issue to shareholders during the quarter has set it up well for the final field programs of work in the Definitive Feasibility Study (DFS). The joint venture agreement with St Barbara Limited is progressing well, with planning finalised for a comprehensive SBM funded Aircore gold exploration drill program across the Lake Wells tenements, commencing in the current quarter. On SBM electing to proceed past the first 12 months of the JV agreement, it has agreed to reimburse APC for previous exploration expenditure of up to $500,000. The company reported net cash outflow from operating activities of ~$1.40 million, majorly due to the exploration and evaluation expenses of $1.05 million. It reported a net cash inflow from financing activities of $3.7 million, majorly due to proceeds from issues of shares. Its net cash and cash equivalents was reported at $3.39 million.

H1FY19 Financial Performance: The company reported a loss after tax of $1.56 million, majorly due to an increase in the administrative expenses and costs associated with R&D tax incentive repayment. 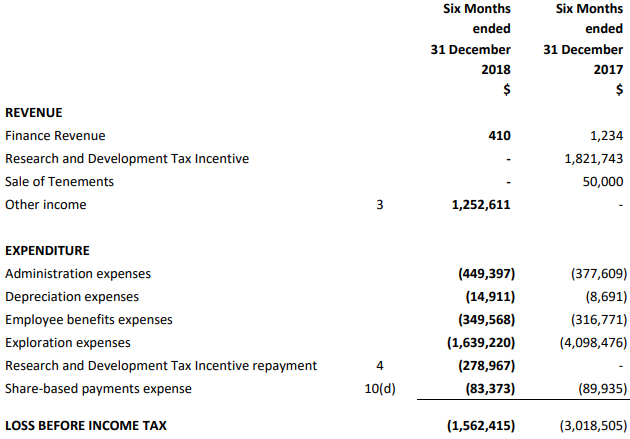 Danakali Limited (ASX: DNK) is engaged in advancing the Colluli Potash Project (CPP), which is located in Eritrea, East Africa. The company recently announced the issuance of share capital, which comprises 264,422,398 ordinary shares of no-par value. Shareholders may use the number 264,422,398 for the calculations to decide if it is necessary for them to denote their interest in, or of a change to their interest in DNK under the Disclosure and Transparency Rules of FCA. Each share carries the right to one vote, and the company does not hold any ordinary shares in treasury.

Marchâ19 Quarter Key Highlights: DNK made significant senior debt funding progress for its Colluli Potash Project located in Eritrea, East Africa. In the debt funding process, AFC and Afreximbank are doing the due diligence over the companyâs report and would gauge the internal approvals required for the credit approval. An independent report from the United Nations Development Programme has identified Colluliâs ability to boost the economy of Eritrea and support its sustainable development goals. The company reported a net cash balance of $7.6 million on March 31, 2019.

During the period, Mr Niels Wage was appointed as Chief Executive Officer (CEO) of the company after an extensive global search. Mr Wage is a seasoned player with extensive experience, who held many senior roles at BHP, including VP of Freight and VP of Potash. In another management change, Mr Tony Harrington has been promoted to Project Director. Mr Harrington is a seasoned player and has vast experience and skills in project execution in emerging markets. 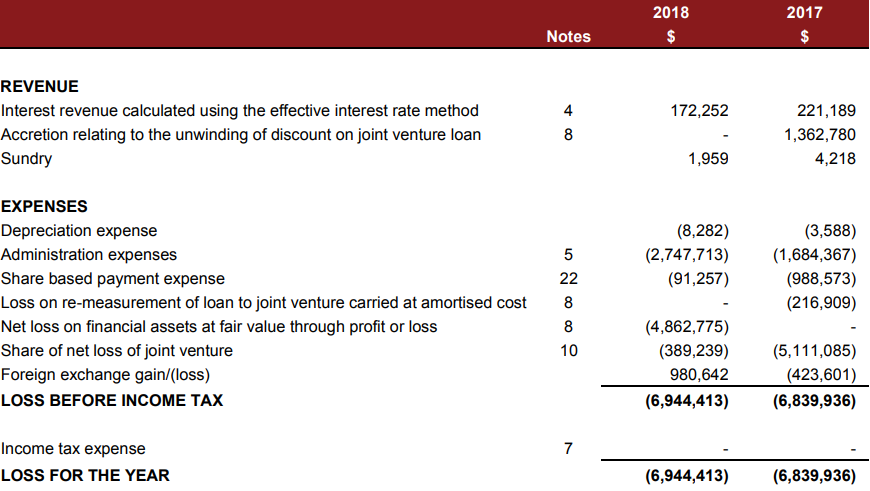 Highfield Resources Limited (ASX: HFR) has an engagement in mineral exploration and is progressing on its flagship Muga project. It has four 100%-owned Potash projects located in Spainâs potash producing Ebro Basin. The company recently received notification from the Ministry for Ecological Transition. On May 31, 2019, the Ministry has approved the granting of a positive DeclaraciÃ³n de Impacto Ambiental (âDIAâ) in respect of the Muga Project. With this development, the company now has the critical environmental permit required to move its Muga Project forward. It can now concentrate on the construction permits for the project and securing the mining concession.

The company, in its Investor Presentation (June 2019), highlighted the shareholding pattern stating that EMR Capital is a strong supporter and Highfieldâs largest shareholder at around 30%, and Australian Super holds around 5% interest in the company. The projectâs Phase 1 capital expenditure was reported at â¬342 million and Phase 2 CapEx at â¬199 million, with C1 cash costs of â¬104/t, including salt by-product credit. HFR reported robust financials for the project with net present value (NPV) of â¬1.16 billion, internal rate of return (IRR) of 23% and EBITDA of â¬300 million per annum at full production. Its cash balance on March 31, 2019, was reported at $50.2 million, and debt facility of â¬185 million was previously approved by key European banks, with new approvals to be sought subsequent to the positive DIA award.

European potash prices have maintained a premium to other prices, majorly due to the tight local supply on the back of mine closures and high-cost local producers. The mine is located at the strategic location; therefore, the large part of the regional premium will be captured at the mine. Other factors which are going to provide Muga with a competitive edge over its global peers are:

Marchâ19 Quarter Key Highlights: The company highlighted the commencement of a new drill hole at Vipasca on March 23, 2019. It has been focusing on more prospective areas towards the east of the Vipasca permit, and in the fourth quarter of 2018, it had completed two drill holes. The company continued constructive interactions with relevant authorities on the anticipated final aspects of its review work for the environmental permit for the Muga project.

As per its plan for the June â19 quarter, at Muga project, the company will continue to take the next steps in the approval process, including the development of documentation related to the Mining Concession and Construction Permits to enable timely submission. Following the Vipasca Permit, HFR will continue to progress drilling programme at V18-01. The company will further continue to progress the appeal process for the second three-year extension application for the AdiÃ³s and QuiÃ±ones permits at Sierra del PerdÃ³n.