Performance of Consumer Discretionary and Consumer Staples Indices on ASX

The below chart shows the performance of consumer discretionary and consumer staples sectors on the S&P/ASX 200 index on YTD basis (till the month of May: 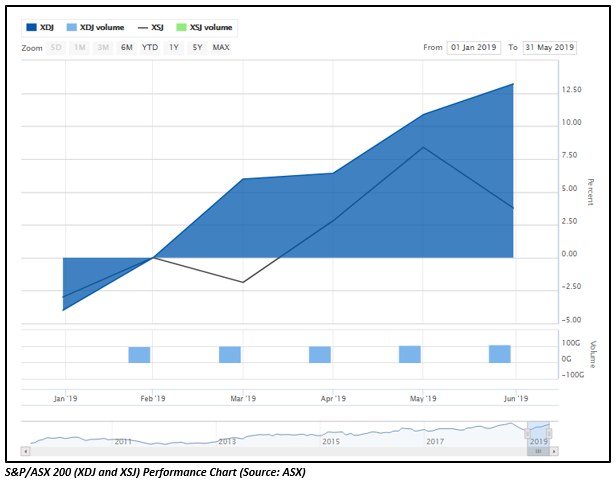 A global food and beverage company headquartered in Queensland, Retail Food Group Limited (ASX: RFG) is the largest multi-brand retail food franchise owner of Australia. Apart from being an emerging leader in the dairy processing, foodservice and wholesale bakery sectors, the company is a roaster and supplier of high-quality coffee products. The companyâs network extends over 2,400 outlets throughout Australia and the international market.

Why RFG Is In News Nowadays?

Facing another blow, the Retail Food Group has been held responsible for sending out invoices with inflated prices to Gloria Jeans franchisees earlier this month. Gloria Jeans franchisees have accused the Retail Food Group of sending invoices for 24 frozen Donut King doughnuts boxes at a price of $127.11 including GST (equivalent to over $5.30 a doughnut) that havenât been ordered by the firm. In an e-mail, Gloria Jeans has pointed out that there has been a pricing error as the correct price for doughnuts is $19.13, not $127.38.

Many franchisees are receiving invoices automatically for products not ordered by them. Some are also receiving 40 kg of chocolate buttons and doughnut fillings besides doughnuts.

Retail Food Group has assured of crediting back the accounts in full of franchisees that have received incorrect invoices of orders they havenât placed.

A leading independent law firm of Australia, Corrs Chambers Westgarth recently notified about the possible filing of class action against the Retail Food Group over the Groupâs conduct with its brand Michelâs Patisserieâ franchisees.

The business model of the Retail Food Group was also considered as âhigh riskâ in a damning report released in March into the $170 billion franchising sector. Post the release of the report, it was decided that the enforcement powers for the competition regulator, ACCC (Australian Competition and Consumer Commission) would be increased. The committee noted poor corporate governance in a few areas of franchising that were similar to the one seen in the banking royal commission into the banking sector.

The Retail Food Group operates the following brands - Michelâs Patisserie, Gloria Jeans, Brumbyâs and Donut King. In May this year, Michel's Patisserie bakery chain was accused of selling cakes to consumers after their use-by date. In response to the media coverage concerning product date extensions, RFG clarified that it follows strict standards in terms of food quality. RFG also informed that it granted the product date extensions subsequent to the written approval from the suppliers.

The Group published its financial results for the half-year ending 31st December 2018 in February this year. The Group reported a statutory net loss after tax of $111.1 million during the period, which was more than the net loss after tax of $87.8 million reported in 1H18. The Underlying NPAT fell 73.4 per cent on the previous corresponding period (PCP) to $6.6 million, impacted by a number of factors. 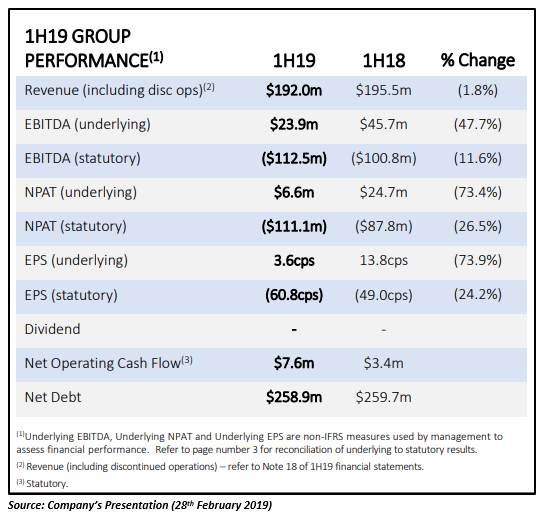 The challenged retail stock crashed 10% on ASX, settling the dayâs trade at AUD 0.135 on 24th June 2019. The market capitalization of RFG was recorded at AUD 27.41 million at the time of writing the report. The stock has reported a negative return on a YTD basis of 49.15 per cent. Besides this, the stock has generated a negative return of 51.61 per cent, 6.25 per cent and 18.92 per cent in the last six months, three months and one month, respectively.

As a part of its Customer First Plan, the company appointed four members to its Executive Team during the first half of 2019, strengthening its leadership team. The improvements were seen across its merchandise range, service levels and store ambience during the period. Also, the user experience, merchandise range and delivery options were improved on the myer.com.au website. The company focussed on cash flow management and deleveraging in 1H19 and refinanced the debt facilities in November 2018.

The financial results for the first half of 2019 were announced by the company on 6th March 2019. The company reported a Statutory NPAT of 38.4 million dollars, relative to the loss of 476.2 million dollars reported in 1H2018. The Operating cash flow and EBITDA also improved by $8 million and $5.3 million to $173 million and $113.6 million, respectively.