Let us look at some of the resources sector players and recent announcements made by them. 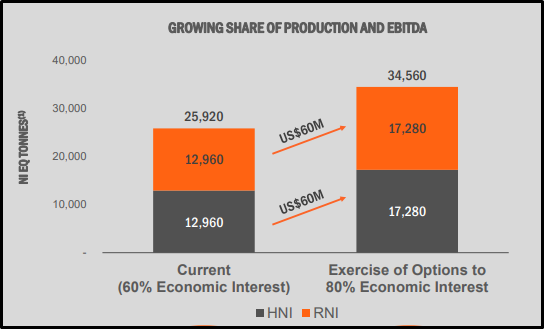 On 19 May 2020, the Company announced its intentions to raise its present ownership of 60% in the in both the Hengjaya Nickel RKEF Project and the Ranger Nickel RKEF Project to 80%. This decision was made by NIC subsequent to consultation with its collaboration partner, Shanghai Decent Investment Group Co., Ltd and its associates (Shanghai Decent), which currently holds the other 40% interests in both HNI and RNI.

Additionally, NIC also shared its intentions to undertaking a $231 million fully underwritten, accelerated pro-rata non-renounceable entitlement offer in order to finance the consideration payable to Shanghai Decent in connection with the Transactions.

The cash consideration of approximately US$150 million is payable to Shanghai Decent by Nickel Mines in connection with the Transactions and shall comprise of:

The Transactions are subject to the approval of Nickel Mines’ shareholders under ASX Listing Rules, and a shareholder vote has been scheduled for the Annual General Meeting of NIC on 29 May 2020 to approve the Transactions.

The Company is optimistic about receiving the approval from shareholders for the Transactions and looks forward to initiating the process to exercise the HNI and RNI acquisition options, targeting a 30 June 2020 completion.

NIC stock did not trade on ASX, on 19 May 2020, due to the trading halt being requested by the Company, pending a release of the announcement on ASX regarding a 100% (underwritten pro rata accelerated non-renounceable entitlement offer) of 100% paid shares in NIC. NIC last traded on 18 May 2020 at a price of $0.565 The stock had a market capitalisation of $940.99 million.

The Stock of Emperor Energy Limited (ASX:EMP), a diversified energy company with upstream and downstream assets in Australia, skyrocketed 94.444% intraday on 19 May 2020, following an announcement regarding the execution of a Binding Agreement with APA Group (ASX:APA). On 20 May 2020, EMP was trading at a price of $0.033, down by 5.714% (at AEST 1:12 PM), with a market capitalisation of $2.86 million.

The agreement was inked with a view to progressing with the Pre-Front End Engineering Design (Pre-FEED) for the provision of midstream infrastructure and services related to gas that is expected to be produced from the Judith Gas Field in the VIC/P47 Permit (100% Emperor Energy owned) in the offshore Gippsland Basin, Victoria.

The Pre-FEED study is scheduled to begin in July 2020 and shall last for four months until completion, where APA shall carry out the work through a composed mix of both in the house as well as external expertise.

Moreover, the Pre-FEED is based on the design of 80mmscf/d (90TJ/day) of sales gas across a 25-year project life with gas processing to meet the AS4564 gas sales specification.

The Pre-FEED study shall include:

This Pre-FEED Agreement is the first Binding Agreement progressing from the Memorandum of Understanding (MOU) that was reached upon by Emperor Energy and APA in October 2019 in connection with the Judith Gas Project.

In July 2019, Emperor Energy had notified that it had completed an Independent Resource Statement for the Judith Gas Field within the VIC/P47 Exploration Permit located in the offshore Gippsland Basin, Victoria highlighting:

On 20 May 2020, WGX notified the market that Australian Vanadium Limited (ASX:AVL) inked a letter of agreement with the Company for co-operation and support for accessing water for the Project of AVL located in south of Meekathaara, WA. The Letter of Agreement under discussion would develop into a formal agreement in the period of three years.

Further, WGX notified on the placement of 20 million shares at a value of $2.25/share to raise a gross amount standing at $45 million. The raise received a solid aid by the native and overseas institutions, foundation laid by 2 supreme quality native Australian institutions. Further, the raised capital would help the Company to speed up the progress in the entity’s CMGP operation works and its transition to cash flow produce, providing it with enough cash to keep on unlocking the value if its operations and progress with the area.

The Company had recently announced that its Higginsville Gold Operations Pastefill Plant (HPP) was acquired by GALENA MINING LTD (ASX:G1A) for consideration of 11.6 million Galena shares.

Further, it is expected that Galena shall contribute the HPP to Abra Mining Pty Limited, and the same shall be further refurbished and reinstalled at the Project to offer the paste backfill cement required for Abra’s underground mining operation.

Abra Mining Pty Limited is a joint venture company for the Abra Base Metals Project and shall have a cheaper alternative, as well as a technically robust solution for its paste fill requirements.

The WGX stock remained unchanged during the day’s trade on 19 May 2020 at a price of $2.350 due to the trading halt being requested by the Company, pending it releasing an announcement on ASX.