In the present technological era, the existence of humans cannot be separated from the use of technology. Undoubtedly, the ongoing economic success of Australia depends on the country’s ability to utilize technological advances in order to create new products and markets, enhance daily life and improve existing businesses.

The Australian technology sector has witnessed a continuous growth over a period of time and is progressing rapidly. With the advancement to digital technologies and increasing reliance on Artificial Intelligence, many of the new companies have entered into the Australian technology market thereby intensifying competition. The Australian Trade and Investment Commission mentioned in a report that the contribution of digital technologies to Australia’s economy is expected to grow by 75 per cent to A$139 billion between 2014 and 2020. 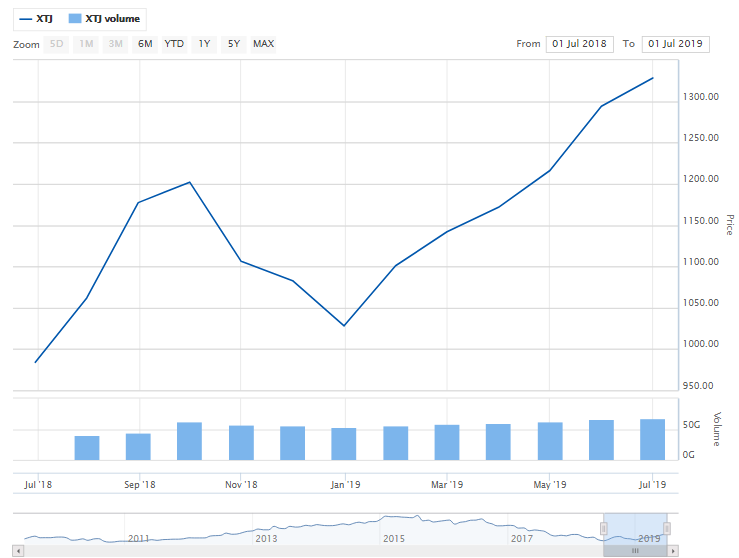 It can be seen from the above graph that the S&P/ASX 200 Information Technology Index edged up sharply from the beginning of 2019 and is moving upwards since then.

The table below highlights some of the best performing ASX-listed tech stocks during the last one year: 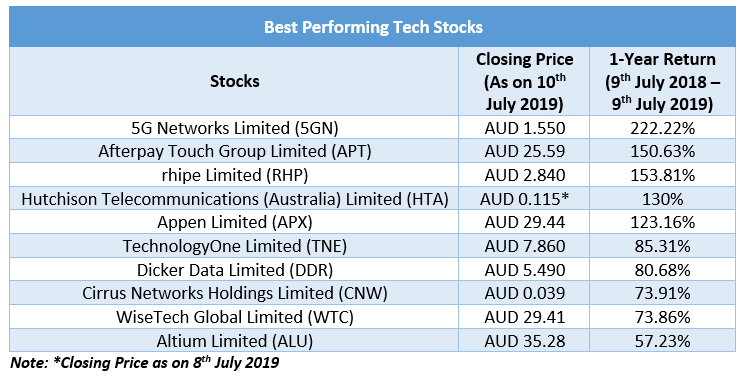 A licenced telecommunications carrier, 5G Networks (ASX: 5GN) has its operations across Australia. The company is working towards empowering the digital future by unifying a seamless digital experience for its customers throughout data connectivity, data centre, cloud and managed services.

During the half-year ending 31st December 2018, the company achieved a revenue growth of 1,979 per cent to $23.57 million from $1.13 million in the prior corresponding period. The EBITDA of the company improved by 632 per cent to $689k relative to the pcp.

Headquartered in Australia, Afterpay Touch Group Limited (ASX: APT) is a payments company driven by technology that aims to make purchasing experience better for a global customer base.

The Group reported its half-year financial results for the period ending December 31st, 2018 in February this year. The total income of the company improved by 85 per cent to $112.3 million during the period, driven by the continued strong growth in Afterpay underlying sales. The Group also posted a statutory loss before tax of $21.5 million.

In March 2019, the company released its annual report for the period ending 31st December 2018. The financial performance of the company was in line with the expectations, with a $4.5 million profit attained during the period. The HTA’s revenue from ordinary activities increased to $10.6 million from $6.2 million in 2017.

The company reported a Group revenue and gross profit growth of 30 per cent in its FY19 half-year results. An improvement of 181 per cent was witnessed in the net profit after tax for the six months to 31 December 2018 that stood at $3.0 million.

Headquartered in Australia, Appen Limited (ASX: APX) delivers high-quality training data in order to improve machine learning at scale. The company has more than 20 years of experience in the collection and enrichment of a broad range of data types.

One of the largest enterprise SaaS (Software as a Service) companies of Australia, TechnologyOne Limited (ASX: TNE) has offices across six countries. The company’s SaaS solution makes its customers’ life simple by providing deeply integrated, powerful enterprise software that is extremely easy to use.

Australia’s largest and longest established distributor of information technology products, Dicker Data Limited (ASX: DDR) has achieved record trading results since it got listed on the Australian Stock Exchange. The client base of the company includes over 5,000 value added resellers.

The 2018 financial year was a record year for the company with its revenue, Net Profit After Tax and EBITDA improving 14.4 per cent, 20.5 per cent and 13.9 per cent, respectively. The company reported a record profit figure of $46.2 million during FY18.

WiseTech Global Limited (ASX: WTC) provides and develops software solutions for the logistics execution industry worldwide. Around 12,000 logistics companies throughout 130 countries across the world are the customers of the company.

The company delivered a high-quality growth in 1H19 with an increase of 68 per cent in its total revenue to $156.7 million. The Net profit attributable to equity holders also grew 48 per cent to $23.1 million during the half-year period.

The company has the ability to deliver significant top line growth as can be witnessed in H1 FY19 results. The company reported strong half-year results with a revenue growth of 49 per cent to $45.7million. The EBITDA (pre options expense) and the Underlying Profit touched record figures of $585k and $585k, respectively in H1 FY19.

An outstanding result was posted by the company during the half-year to 31 December 2018 with its revenue growing 24 per cent to US$78.1 million and net profit after tax increasing 58 per cent to US$23.4 million.

The table below highlights some of the worst performing ASX-listed tech stocks during the last one year:

During 1 July 2018 to 31 December 2018, the performance of the company fluttered with a fall of 20.4 per cent in its revenue to ~$4.41 million. The profit for the period attributable to members was also 17.59 per cent down during the period.

The revenue of the company grew 2,378.48 per cent during the half-year ending 31 December 2018. However, the net Loss for the period attributable to members also saw a rise of 185.7 per cent.

Australia’s leading digital solutions partner, Arq Group Limited (ASX: ARQ) powers the growth of big and small businesses. Founded in 1996, it has its offices across Sydney, Auckland, Brisbane and Melbourne.

During the financial year 2018, the revenue of the company increased by 8 per cent and its Underlying EBITDA decreased by 3 per cent. The company reported a loss of $2.32 million during the period.

By providing affordable, simple and engaging solutions for customers, Buddy Technologies Limited (ASX: BUD) is working towards making customers’ spaces smarter. Also, it ensures that the occupants of its customers are more environmentally aware, efficient and informed.

PS&C Limited (ASX: PSZ) is among the leading end-to-end ICT and digital consulting organisations of Australia. The company works with many leading brands and government agencies of Australia.

The company reported “revenue from continuing operations” of ~$40.80 million and “loss for the half-year attributable to members of PS&C Ltd” of ~$9.79 million during the half-year ending 31st December 2018.

An Australian headquartered company, CommsChoice Group Limited (ASX: CCG) provides a fresh approach to vendor neutral and innovative managed network services. The company has a full-featured communications platform that is available in 25 countries throughout the world.

The revenue of the company improved 12 per cent to $10.7 million during 1H FY19. The company reported a cash balance of $1.3 million at the end of the half-year with no-debt.

Superloop Limited (ASX: SLC) is an Australian headquartered company that aims to become the most trusted enabler of managed services throughout the Asia Pacific metro region. The company’s network is securely connected to around sixteen of the key data centres in Sydney.

The company generated a net loss after tax of $8.7 million during the half-year ending 31st December 2018. However, the revenue of the company improved by 18 per cent to $60.3 million from $51.25 million in the pcp.

Tesserent Limited (ASX: TNT) offers enterprise-grade managed networking and cybersecurity services to its corporate customers. The customers of the company are in Australia, the UK and Korea.

During the half-year ended 31 December 2018, the company’s revenue improved by 6.6 per cent to $2.8 million. However, the net loss attributable to the owners of the company widened by 45.9 per cent to $1.88 million.

The Citadel Group Limited (ASX: CGL) develops and delivers managed technology solutions. The company manages the information in complex environments through the integration of systems, know-how and people.

The company delivered strong half-year results during the period ending 31st December 2018 with a rise of 5.5 per cent in its revenue and 5.4 per cent in its NPAT from Continuing Operations.