Cannabis is a popular medical and recreational drug which produces two bioactive substances produced namely THC and CBD sought by medical patients and recreational users. It offers significant medicinal value which can help cure illness and other conditions. The drug is often prescribed to treat Muscle spasms, Nausea from cancer, Seizure disorders and Crohn’s disease. The scientific study of chemicals in the marijuana, called cannabinoids, led to the production of two FDA-approved medications in the U.S. The use of cannabis for medicinal purposes is legalised in many of the North and South American countries, European countries, like the US, Argentina, Canada, Brazil, Greece, UK, etc. It is also legalised in Australia and New Zealand. Legalisation of Cannabis around the world The purchase of the drug was recently legalized in Canada which became the second country to allow usage of recreational Cannabis after Uruguay legalized its possession and use in 2013. The Canadian market has been growing rapidly with revenues expected to rise above $7 million. In Central and South American region, the usage of the drug is likely to receive a nod in Mexico, Colombia, Argentina, Peru, Ecuador, Chile and Venzuela. While Mexico is aiming to legalise Cannabis in the near future, Venzuela is also expected to make the move in the coming years. New Zealand is expected to legalise Cannabis in 2020 with a referendum during the general election and Australia had legalised medicinal use of Cannabis in 2016. The drug, though allowed in majority of the states in the U.S (for recreational as well as medical purposed) will see complete legalisation in the coming years. The European countries have also been on the spree to decriminalise Cannabis. Few African countries are also looking to join the trail. Legalisation in U.S – A hidden treasure for the Canadian businesses Though US is most likely to see complete legalisation of Cannabis in the near future with only 3 states banning the usage of the drug in any form, the Cannabis companies in the region will still be at the losing end in comparison to the Canadian Cannabis businesses. At the federal level, the usage of Marijuana is still completely banned. The Federal illegality has left the businesses in the U.S incapable of raising any finances from banks. This inconvenience further aggravated the challenges by persuading the companies to deal largely in cash making them a target for robberies. The legalisation in the U.S will also mark a rapid boost in the job market setting the stage for competition between the two. The companies in the U.S are more likely to source the experienced executives from Canadian companies than hiring locally which will trigger a talent war. While these obstacles pose future challenges for the U.S Cannabis businesses, the Canadian ones remain spared. Due to the above bottlenecks, the Canadian businesses are more likely to take advantage out of the legalisation of Cannabis usage in the U.S. and exploit the market over local businesses. A look at 4 Cannabis stocks listed on ASX Elixinol Global Limited Elixinol Global (ASX: EXL) has a widespread presence in the cannabis industry. It manufactures and distributes hemp dietary supplement and skincare products, hemp food and wellness products and also engages in the manufacture of medicinal cannabis. Elixinol is looking to raise $50 million in cash from investors. A large chunk of $32 million of the funding will be deployed for expansion in the US, $8.2 million will be utilized for Europe, South America and Asia expansion and the remainder ($7.4 million) will be the general working capital of the company. Bell Potter Securities will act as the broker and has offered clients with 12.8 million new shares at $3.90 each in the company. The company’s shares went on a trading halt after the fund-raising deal was launched, and will be under trading halt until the company releases further details on or before 6 June 2019. In a recent update for results on Q1FY19 ending 31 March 2019, the company reported a group revenue of $8.2 million, up 21% on the prior corresponding period Q1FY18 revenue of $6.7 million. The company made significant progress in FY18 supported by the strategy to grow its share in the CBD dietary supplement and wellness products market. In April 2019, the company acquired 25% holding in Pet Releaf, a US-based CBD pet products company.

Quarterly revenue growth (Source: Company Reports) Outlook: As Elixinol looks forward to future growth, markets in Europe, USA and Japan augur great opportunities to accomplish the set targets. The company is confident on its future growth and will diversify its business across a variety of channels with a focus on national retail sales. With significant investments made during the quarter (with a strong progress in Europe) and a positive movement on legislation in hemp markets, Elixinol aims to become a global leader of CBD consumer products in the near future. The company’s stock is on a trading halt on Management’s request in connection to a placement to institutional investors. Other 3 cannabis stocks under Investors’ radar Cann Group Limited Cann Group Limited (ASX: CAN) is a company operating in the medical cannabis space. The company provides Australian patients with access to medicinal cannabis with its research and cultivation facilities. Following a contract signed with the Victorian Department of Health and Human Services, the company recently received its first order for Australian sourced and commercially grown cannabis resin for Australian patients. 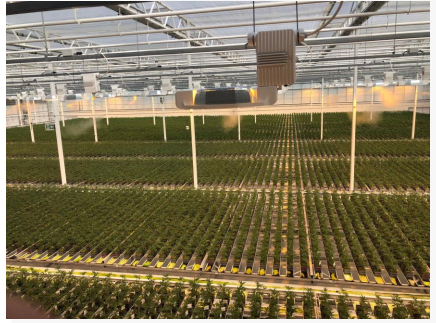 Aurora sky facility in Canada (Source: Company Reports) In the quarterly update for March 2019, the company announced its non-binding Head of Agreement (HOA) for purchase of a site in Mildura region to construct a state-of-the art greenhouse for cultivation and production of medicinal cannabis. It has also entered into an agreement with Aurora Cannabis Inc for production of GMP processed dry flower at its facilities. During the period, the company infused investment of $250,000 into Emerald Clinics which was used by the company to support the national roll-out program of its clinics. Outlook: On the outlook front, the company is planning for debt funding for the Mildura expansion facility and is also preparing for the construction of the new facility. It is focusing on building a strong platform to generate profits and shareholder value. Stock performance: The company’s stock closed at a market price of $2.090 (as on 04 June 2019), up 2.451% on 4 June 2019 with a market capitalisation of $285.2 million. THC Global Group Limited THC Global (ASX: THC) delivers premium-quality medicinal cannabis products to Australian and overseas market.

The Chairman of the company at the 2019 AGM stated that THC Global is planning a cultivation project in Nova Scotia to enter the Canadian Cannabis market. Simultaneously, it will focus on the expansion of its hydroponics equipment business. THC has been able to access the key infrastructure required to commence a vertically integrated manufacturing process within Australia which is outlined by its Manufacturing Facility in Southport, Queensland, increased capacity Cultivation site in Northern NSW and R&D and secondary Manufacturing site in South Eastern Queensland. The company in comparison to its peers stands at a better position with large-scale assets, experienced talent and commercial partnerships. Outlook: The company, as on the AGM date, is far stronger than it was a year ago. With its strong global presence and continued expansion, THC Global is poised to generate significant revenue in the future. Stock performance: The company’s stock closed at a market price of $0.430 (as on 04 June 2019), down -2.273% on 4 June 2019 with a market capitalisation of $59.29 million. CannPal Animal Therapeutics Limited CannPal Animal Therapeutics Limited (ASX: CP1) is a pharmaceutical company focused on products for veterinary therapeutics derived from cannabis. 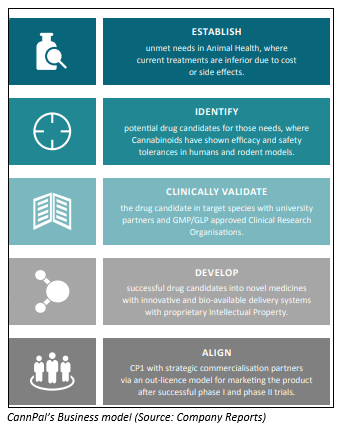 As at 31 March 2019, the company had a cash balance of $4.09 million with operating cash outflows amounting to $464,000 which included $299,000 spent on research and development. During the quarter, the company entered into a collaboration with CSIRO to undertake research into the use of CSIRO-patented technologies. This research is aimed at enhancing the delivery of hemp and cannabis derived compounds in animal health. CannPal also received the ODC permits to import clinical trial material for CPAT-01 Phase 2A osteoarthritis study and initiated protocol design for CPAT-01 Phase 2B study. The company is well capitalised and is rapidly progressing towards the key milestones communicated to the market. Stock performance – The company’s stock closed at a market price at $0.155 (as on 04 June 2019), up 3.333% on 4 June 2019 with a market capitalisation of $13.97 million. Australian companies with exposure in Canada While Canada legalised the possession and use of Cannabis, there are a plenty of benefits in store for ASX cannabis investors. For instance, Creso Pharma Limited (ASX: CPH) with its diversified business lines and a fully owned Canadian cannabis facility in place has a distinctive edge over peers. Another player Althea Group Holdings Limited (ASX: AGH) is backed by Aphria, one of Canada’s biggest pot-growers and supplies pot industry expertise and proprietary products to the company. Backed by Canada’s Canopy Growth (which recently completed its first legal export from Canada to U.S), AusCann Group Holdings Limited (ASX: AC8) is another Australian Cannabis business that enjoys a competitive advantage. Disclaimer This website is a service of Kalkine Media Pty. Ltd. A.C.N. 629 651 672. The website has been prepared for informational purposes only and is not intended to be used as a complete source of information on any particular company. Kalkine Media does not in any way endorse or recommend individuals, products or services that may be discussed on this site. Our publications are NOT a solicitation or recommendation to buy, sell or hold. We are neither licensed nor qualified to provide investment advice.
All pictures are copyright to their respective owner(s).Kalkinemedia.com does not claim ownership of any of the pictures displayed on this website unless stated otherwise. Some of the images used on this website are taken from the web and are believed to be in public domain. We have used reasonable efforts to accredit the source (public domain/CC0 status) to where it was found and indicated it below the image.