Healthcare sector is currently under a lot of pressure mainly due to the following reasons:

Despite the current scenario, there are several healthcare stocks which are making strong progress in their operations. We have screened 10 health care stocks, currently trading on ASX, which we believe investors should know about. Let’s take a look at these stocks and their recent updates.

Australian based medical equipment provider, Paragon Care Limited recently released a half year update wherein it informed that it has witnessed an increase of $119.4 million in revenues during the first half of FY20. For the same period, the gross margins have remained constant at around 38% half year on half year, despite the fall in the A$/US$ during the past 12 months.

For H1FY20, the company’s Normalised EBITDA was around $12 million, representing a 10% margin on revenue.

The company further informed that following the recent change in senior management, and reset of the company’s objectives, the implementation of the new ERP System (Microsoft Dynamics 365) has been extremely poor. Due to this, the company intends to undertake a complete review of the ERP systems which will result in a more measured, and less risky, phased roll-out.

Leading allogeneic cellular medicines developer, Mesoblast Limited recently submitted its completed Biologics License Application (BLA) to the US FDA for Ryoncil™ (remestemcel-L), its lead allogeneic cell therapy for the treatment of children with steroid-refractory acute graft versus host disease, marking a major corporate milestone for Mesoblast. This step is in line with the company’s goal of bringing RYONCIL to market and providing its innovative biologic therapy to the many children with this life-threatening condition.

If the product gets approval from FDA, it is expected to launch in the US in 2020.

Ansell Limited, a world leader in providing superior health and safety protection solutions, currently has a market cap of around ~$4.17 billion. Ansell as a company has survived through its 125 years due to a clear sense of purpose, quality products, sound professional values and an ability to look ahead and resiliently adapt to challenge and change.

Last year, the company witnessed major transformation of the organization which included a change of the corporate structure to one which is more efficient and focused in serving the company’s two remaining strategic business units, and an optimised manufacturing footprint.

The company has a strategy of principally growing its business organically through a parallel focus on innovation, emerging market development, building strong brands and forging close partnerships with leading distributors. The company’s strong FY19 results can be viewed the below image –

In the recently held Annual General Meeting (AGM), the management of the company stated that the revenue of the company went up by 24.4% and stood at $11.4 billion in FY19. In the same time span, Core net profit after tax increased by 2% to $590.9 million, causing EPS to increase by 2.1% to 285.8 cents. 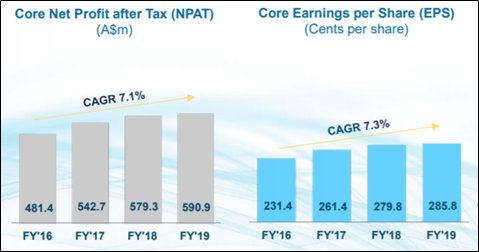 The company believes that it is well positioned as a leading international healthcare service provider and expects opportunities which will drive efficiencies and establish stronger global partnerships. In FY20, the company continues to target Core EPS growth of 2% to 4% on a like-for-like basis.

Health care equipment & services provider, Cochlear Limited, currently has a market cap of around $13.94 billion. The company has a wide range of fully-featured products and a broad patent portfolio that protects the company’s intellectual property. Since listing, the company has invested more than $1.9 billion, with 13% of sales revenue invested in R&D in FY19.

In FY19, the company reported a sales revenue growth of 7% in FY19. The company also earned a net profit (including the revaluation of innovation fund) of $276.7 million in FY19, an increase of 13% as compared to last year.

Services revenue of the company increased by 20% over the period, with sound processor upgrade revenue increasing by 17%. Further, the cochlear implant business also witnessed a 2% growth in its revenue, but the total units declined by 3%. During the year, the company lost its market share in US and Germany due to a competitor product launch.

The company recently announced the appointment of highly experienced Michael Daniell as the Non-Executive Director.

Australia’s leading healthcare company, CSL Limited (ASX: CSL) currently has a market cap of around $141.63 billion with stocks trading at around $311.980/share (at AEDT2;39 PM).

Notably, in the last one year, CSL stock provided a return of around 60% to its shareholders. This healthcare giant is currently working on some new product opportunities

FY19 was another strong year of growth for the company. Major highlights of FY19 include:

Healthcare technology company, Alcidion Group Limited, is actively investing to accelerate growth and to further evolve the platform to ensure that it capitalizes on the rapid shift taking place in the industry, as global healthcare providers look to technology to improve the delivery of healthcare.

As at 31 December 2019, the company’s total sold revenue for FY2020 was $15.4 million, compared to $16.9 million of total revenue reported for the twelve months to June 2019. In the second quarter of FY20, the company reported a net operating cash outflow of $1.8 million in line with the increased investment taking place across the business and payments of deferred costs from the prior quarter.

Provider of non-invasive medical imaging software and services, Resonance Health Limited, recently released its quarterly report for the period ended 31 December 2019. Over the quarter, the company executed Solution Partner Agreement with Siemens Healthcare GmbH for the distribution of the company’s FerriSmart product through the Siemens Digital Marketplace. Total revenue for the December 2019 quarter was $938K while Cash receipts from customers were $846K.