While searching for investment asset in the stock market, an investor generally looks for companies, which have the capability propel growth in the future. Growth refers to increase in quantitative as well as qualitative values.

In the below article, we would discuss six investment assets, which could increase the value of an investor’s portfolio. Short-term traders are on a look out for sound business profile as well as decent technical rally.

Let’s have a look at six companies with their latest updates:

Bravura Solutions Limited (ASX: BVS) is in the business of licensing, development of management software applications.

Pushpay Holdings Limited (ASX: PPH) offers a donor management system, which comprises of donor and finance tools along with a custom community application. The company, through a release dated 9 October 2019 notified that it would announce results for the six months ended 30 September 2019, in the interim results investor briefing on 6 November 2019.

REA Group Ltd (ASX: REA) has a presence in the market with its purpose to enhance property experiences. It provides digital tools, information and data for people interested in property.

The company recently communicated about the changes in holdings made by directors:

For the year ended 30 June 2019, the company updated the market with its financial highlights from core operations:

SEEK Limited (ASX: SEK) is primarily involved in online matching of hirers and candidates with career opportunities and related services.

The company recently issued some securities:

The company through a release dated 3 September 2019 announced that the NZD currency conversion rate for dividend were as follows:

The company would be conducting its 2019 Annual General Meeting on 25 October 2019. The key business items for the same would be:

Noni B Limited (ASX: NBL) is in the business of retailing of women’s apparel and accessories with a market capitalisation of $272.34 million as on 11 October 2019.

When it comes to the financial end, the company reported a growth of 22% in underlying EBITDA, at $45.5 million. It declared final dividend amounting to 5.5 cents per share, fully franked. The below picture depicts an overview of trade overview of the company: 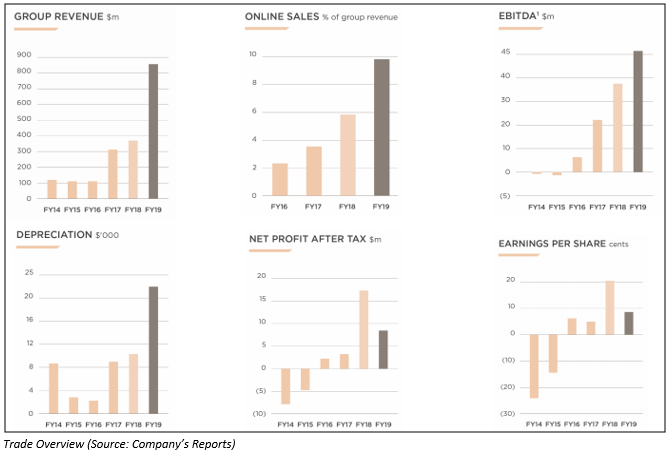