As the areas like supermarkets, oil stocks and major banks suffered during the week and ASX poised to close in red, some stocks came under discussion and were moving in the opposite direction of the markets. These stocks have latest updates with some positives to look at:

KING RIVER COPPER LIMITED (ASX: KRC) â The company has provided Scoping Study update on its 100% owned Vanadium-Titanium-Iron Project at Speewah, it is a positive business case with healthy cashflow margin supports progression of the study to the PFS stage. The consolidated entity recorded an operating loss after income tax of $871,803 compared to 2017 loss of $422,996 therefore, there was no dividend declared or paid during the year. The cash balance at year end was $4,619,139 and has no debt which signifies a decent balance sheet. It also had a net current asset surplus of $6,901,444 compared to 2017 surplus of $616,413. In the last six months, the share price of the company fell by -27.27 percent as on 02 November 2018. The stock traded at a market price of $0.034.Â

AUSTRALIAN MINES LIMITED (ASX: AUZ) â The company has announced its second major scandium research partnership for next generation of battery storage technology. Australian Mines is positioned to be at the front of the move through the development of world-class Sconi and Flemington cobalt-nickel-scandium projects in Queensland and New South Wales as the world moves towards cleaner, more sustainable energy sources. The Consolidated Group made a loss for the year of $5,322,775 as compared to the 2017 loss of $1,675,932 due to the companyâs position of mineral explorer, rather than producer. The cash and cash equivalents of $8,984,625 as compared to $4,638,766 in 2017 is enough to cover the expenses. In the last six months, the share price of the company fell by -53.57 percent as on 02 November 2018. The stock traded at a market price of $0.047.

G MEDICAL INNOVATIONS HOLDINGS LIMITED (ASX: GMV) â The company has announced and has executed an agreement to acquire 100% of the outstanding membership interest of Telerhythmics LLC a US based cardiac diagnostic monitoring services provider. Yacov Geva, the CEO has put in his personal cash into the company worth US $10 million in the form of loan to support the company for its growth and expansion plan which includes inventory as well as the medical devices and also the working capital. There was a 100% increase in revenue from ordinary activities to $1.01 million as at June 30, 2018. No dividend has been paid or recommended to be paid for the half-year ended 30 June 2018. In the last six months, the share price of the company gained 17.24% percent as on 02 November 2018. The stock traded at a market price of $0.355.

WHITEHAWK LIMITED (ASX: WHK) â The company has entered into a new contract to provide a tailored version of its 360 Cyber Risk Framework to departments within the U.S. Government to protect against supply chain intrusions. The company reported revenue from operations at US $240,526 as at 2018 from US $23,163 as at 2017. The Groupâs key asset, the business to business (B2B) e-commerce cybersecurity exchange, came online in the first half of 2018. This has resulted in an increase in revenue for the same period over last year. However, due to the losses made of $(1,633,078) there were no payments of dividends during the reporting period. In the last six months, the share price of the company fell by -52.50% percent as on 02 November 2018. The stock traded at a market price of $0.087. 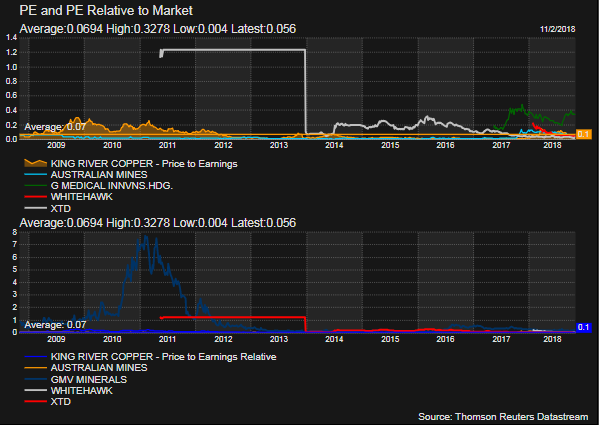 The advice given by Kalkine Pty Ltd and provided on this website is general information only and it does not take into account your investment objectives, financial situation or needs. You should therefore consider whether the advice is appropriate to your investment objectives, financial situation and needs before acting upon it. You should seek advice from a financial adviser, stockbroker or other professional (including taxation and legal advice) as necessary before acting on any advice. Not all investments are appropriate for all people.Â Kalkinemedia.comÂ and associated websites are published by Kalkine Pty Ltd ABN 34 154 808 312 (Australian Financial Services License Number 425376). website), employees and/or associates of Kalkine Pty Ltd do not hold positions in any of the stocks covered on the website. These stocks can change any time and readers of the reports should not consider these stocks as advice or recommendations.