Despite global slowdown and tepid macro sentiments, there are few consumer related sectors that have shown decent growth in the recent past. Businesses with product portfolio related to retail consumption have shown good potential.

In this article, we are discussing five small-cap stocks that are related to the consumption business. Letâs have an eye on the recent updates of the following five stocks.

Select Harvests Limited is in the business of growing, processing and selling almonds to the food industry from company owned and leased almond orchards. Some of the other products of the company are dried fruits, seeds and edible nuts. As on 02 December 2019, the company has a market cap of $741 million.

SHV declared its FY19 full-year financial results, wherein the company reported revenue of $298.474 million as compared to $67.581 million in FY18. Its Earnings Before Interest Tax Depreciation and Amortisation (EBITDA) was noted at $95.2 million, while Net Profit After Tax (NPAT) stood at $53.0 million.

The business reported almond crop volume at 22,690 metric ton (MT), up 45% year on year, aided by positive action from the greenfield investment strategy. Average SHV almond price stood at $8.60 per kg, up 6.8% on a y-o-y basis. The Almond Division delivered earnings before interest and tax (EBIT) of $82.2 million in FY19.

The Food Division reported an EBIT of $5 million in FY19. This stable result included strong demand for industrial product from the Chinese and Asian markets, while the domestic market remained challenging. 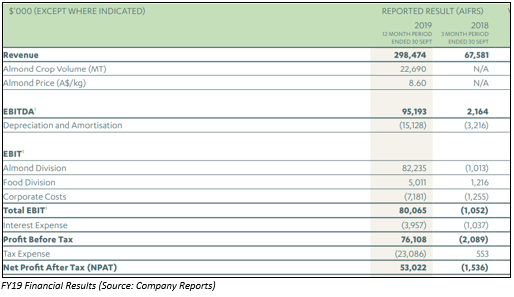 The global macro for almonds continues to remain positive moving forward, driven by strong demand from increasing middleclass wealth and a higher number of consumers adopting and consuming healthier diets, including the increased consumption of plant-based products.

BGA, which is engaged in activities such as processing, packaging and manufacturing of dairy products, recently updated the market with management changes. The company announced the appointment of Pete Findlay as Chief Financial Officer and the retirement of Colin Griffin, who served the position of CFO for the past 26 years. As on 02 December 2019, the company has a market cap of $809.85 million.

The business is expected to enhance its portfolio of high-quality food products, in addition to investing in and protecting its famous Australian brands, in FY20. However, due to unprecedented competitive milk supply situation and easing demand from third party, branded businesses resulted in a change in the profit outlook for FY20.

Consequently, BGA expects to register normalised EBITDA at $95 million - $105 million in the financial year 2020 compared to $115 million in FY19.

Webster Limited is involved in production, processing and marketing of products including cotton, honey and walnuts. As on 02 December 2019, the company has a market cap of $711.81 million.

Operating profit was up, aided by 9.5% growth in underlying Wagyu meat sales on pcp terms. The company reported an adverse impact of ~$36 million during H1FY20 related to elevated expenses related draught to maintain production quality and supply in response to adverse seasonal conditions. The business reported strong y-o-y growth, which reflects one-off revenues from structural reorganisation of Livingstone and 1,824 supply chains.

Asaleo Care Limited is engaged in manufacturing, marketing, distribution and sale of professional hygiene and personal care products in Australia, New Zealand and Fiji, in addition to several countries in the Pacific. As on 02 December 2019, the company has a market cap of $556.71 million.

The companyâs performance during the six months to 30 June 2019 was in line with expectations. During the period, the company launched new products related to new innovative proprietary âHero Systemsâ. Moreover, it completed the sale of the Consumer Tissue Australia business.

In the first half financial results for the period ended 30 June 2019, the company reported underlying revenue at $202.0 million, up 2.2% on a y-o-y basis, driven by retail segment. The company registered underlying EBITDA at $39.4 million as compared to $42.9 million in FY18, representing a year on year decline of 8%.

During the period, the businessâ gross margins were challenged on account of higher pulp costs and increased investment in trade activity, partly offset with lease accounting change. 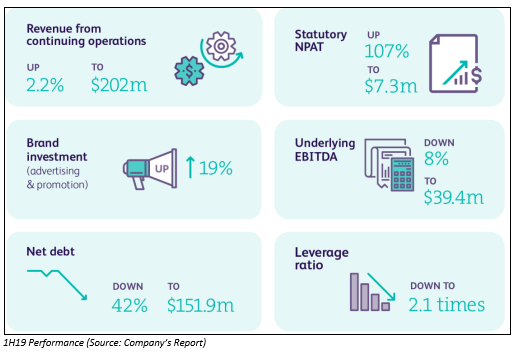