The S&P/ASX 200 ended the week in green zone, settling at 6669.2, up by 14.3 points, driven by strong performance by major banks, charged-up tech stocks, soaring healthcare stocks and rising miners, while weighed down by gold miners and certain growth stocks.

Discussed below are five companies from different sectors in Australia that have performed really well this week with positive stock returns in the last few months. Let’s look what these companies have been up to in terms of their business activities and other updates.

Vysarn Limited (ASX: VYS) is engaged in the provision of production critical services and solutions, with an initial focus on the resources, construction and utilities industries.

Share Sale Facility- On 10 September 2019, the directors of the company announced details of a share sale facility for holders of Less than a Marketable Parcel (less than $ 500 in value as per ASX) of the Company’s shares. Of the company’s 1,134 shareholders, around 227 hold Less Than Marketable Parcels, representing approximately 669,288 Shares or 0.22% of all issued shares. A less than Marketable Parcel of Company shares will be any registered shareholding of 9,260 shares or less on the Record Date (9 September 2019).

The sale price will be equal to $ 0.054, which is also the issue price of Company shares under the capital raising completed in August 2019. Proceeds are expected to be distributed within fourteen days of the sale.

Ausdrill Acquisition – On 29 August 2019, Vysarn informed that it had completed the transformative acquisition of waterwell drilling assets and associated inventory from Ausdrill Northwest Pty Ltd for $ 16 million via its wholly-owned subsidiary Pentium Hydro Pty Ltd. This would enable Vysarn to enter the mining services sector. 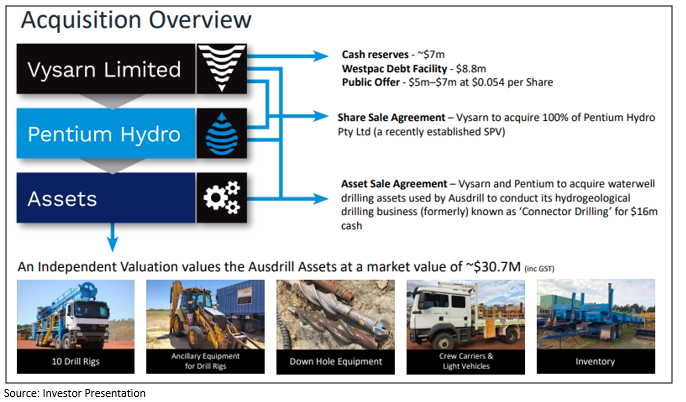 Castillo Copper Limited (ASX: CCZ) is metal explorer focused on copper, nickel, zinc & cobalt. Currently, the company is strategically transforming to morph into a mid-tier copper group underpinned by three core pillars Ø Pillar I being its Cangai Copper Mine in northern New South Wales with a JORC inferred resource of 3.2Mt @ 3.35% Cu; Pillar II being the Mt Oxide project in the Mt Isa district, Queensland, which delivers significant exploration upside; and Pillar III being other highly prospective assets in Zambia.

Castillo Copper’s market capitalisation stands at around AUD 15.4 million with ~ 641.59 million shares outstanding. On 13 September 2019, the CCZ stock settled the day’s trading at AUD 0.023, down by 4.17%. In addition, the CCZ stock has delivered positive return of 100% on YTD basis.

Luanshya project – Geological Review- On 10 September 2019, Castillo Copper released the second independent geological review on the priority Luanshya project (80%-owned) in Zambia, located in the traditional “Copperbelt” where large scale mining first commenced.  The findings of the review are positive and confirmed copper mineralisation with significant exploration upside. A comparison of heritage data verified that most of the southern portion of the Luanshya project’s underlying geology is Lower Roan Group. 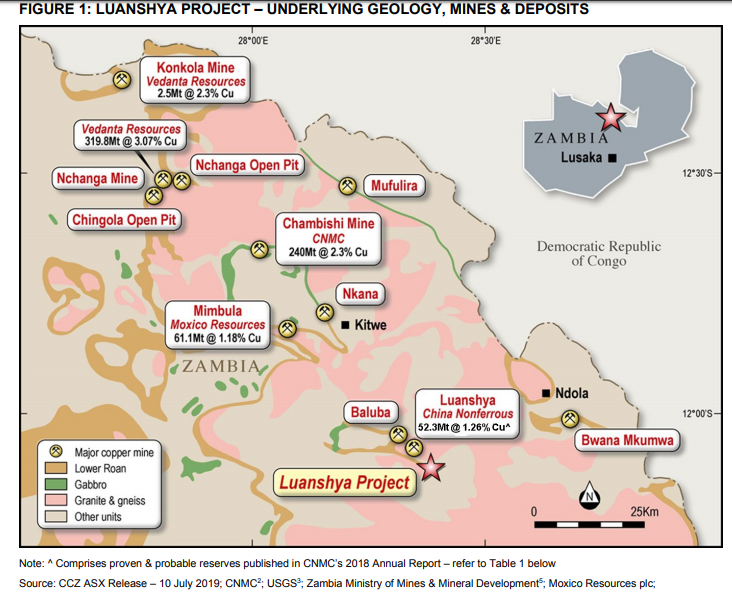 Cangai Copper Mine Update – On 2 September 2019, Castillo Copper reported to have received encouraging assay results for legacy stockpiles at Smelter Creek and along the line of lode at Cangai Copper Mine (CCM), with head grades averaging 2.03% and 1.23% Cu1 respectively.

Health tech company CardieX Limited (ASX: CDX) is developing and commercialising digital and device-based solutions for big-scale population health disorders/disease. The company has ‘XCEL device’ that is highly used in the measurement of central blood pressure which is imperative for managing hypertension and related cardiovascular disorders worldwide. 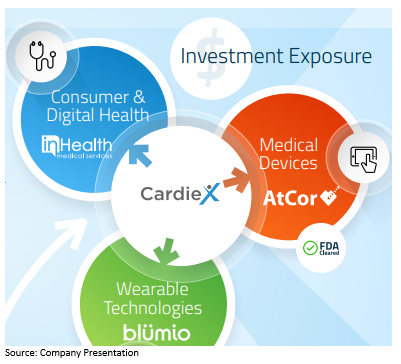 JV with Mobvoi- On 11 September 2019, CardieX announced to have entered into a multi-year agreement to co-develop consumer wearable applications in partnership with Mobvoi Information Technology Co. Ltd, Google’s official operating partner in China for the development of smart-wearable solutions for Google’s Wear OS platform. Moreover, Mobvoi, relatively less popular in the west, is also one of the fastest growing Artificial Intelligence (AI) and consumer electronics companies in China.

All development activities and commercial execution of the agreement would be undertaken by CardieX’s 100%-subsidiary ATCOR Medical Pty Ltd, based on ATCOR’s SphygmoCor® cardiovascular and hypertension algorithms and patent.

Management appointments – On 5 September 2019, CardieX announced a new senior executive appointment together with an internal executive change to help drive the Company’s global product strategy. These include- Antony Sloan as the Global Head of Marketing and Communications and internal appointment of Rhonda Welch as the Vice President of Health Economics.

BluGlass Limited (ASX: BLG) is a global leader in commercialisation of breakthrough technology using Remote Plasma Chemical Vapour Deposition (RPCVD) for the manufacturing of high-performance LEDs and other devices. Besides, BluGlass has developed a new process using RPCVD to grow advanced materials such as gallium nitride (GaN) and indium gallium nitride (InGaN), that are imperative to the production of high-efficiency devices (power electronics and high-brightness LEDs) used in next-generation vehicle lighting, virtual reality systems and device backlighting.

Bridgelux Agreement – On 11 September 2019, Australian semiconductor technology developer BluGlass Limited reported to have signed a Joint Development Agreement (non-exclusive) with leading US based LED company, Bridgelux to develop cascade LEDs using BluGlass’ RPCVD technology and establish a path for mainstream applications in the general lighting market.  The deal would provide BluGlass with the revenue to progress its development work. 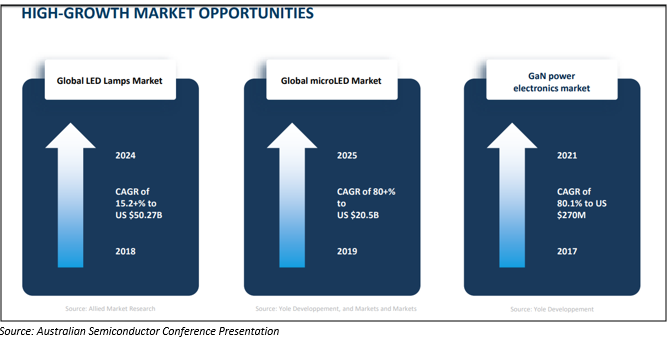 New Laboratories- On 26 August 2019, BluGlass announced the formal opening of its Paul Dunnigan laboratories at its state-of-the-art facility in Silverwater, Sydney, which represents an investment of $6 million in additional equipment and associated infrastructure. The Paul Dunnigan labs will contribute to BluGlass’ centre of worldwide excellence in semiconductor process and equipment development.

Hill 800 Exploration Update – On 11 September 2019, Carawine Resources informed the stakeholders that the company had identified new geochemical evidence for a copper-gold porphyry source of mineralisation at its advanced Hill 800 deposit located within the Jamieson Project (100%-owned) in northeast Victoria, Australia. The drilling to date at Hill 800 deposit has been returning compelling widths and grades of gold and copper mineralisation from intensely altered volcanics, thus reinforcing the company’s confidence to chase a porphyry copper-gold target at depth beneath Hill 800, and perhaps at the Rhyolite Creek as well. 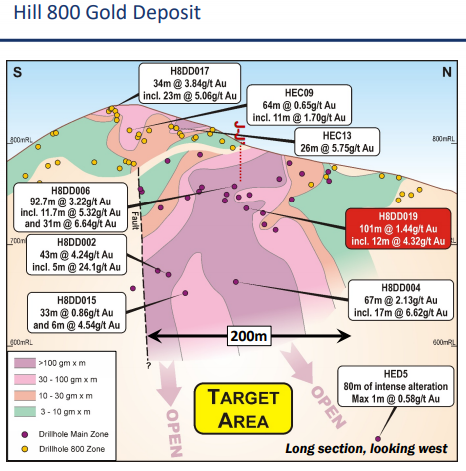 The results have been derived from the analysis of multi-element geochemical data from 19 diamond drill holes completed by the renowned expert Dr. Scott Halley, for Hill 800.