5 Highlights When it Comes to ASX Versus Wall Street

The stock exchange had 2,242 listed entities at the end of September 2019. The roots of the exchange date back to 1871 when the Sydney Stock Exchange came into existence. In 1987, the amalgamation of six state based stock exchanges formed the Australian Stock Exchange. 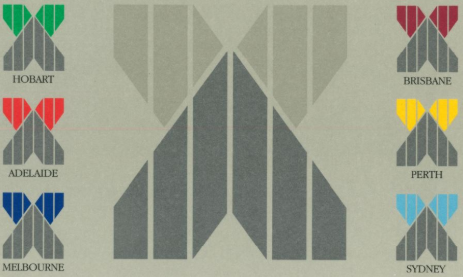 In the same year, the National Securities Exchanges Guarantee Corporation was incorporated to safeguard the interests of investors. The Stock Exchange Automated System (SEATS) was launched, and just after a day worldwide stock market crashed. However, the system handled the order deluge with no issues.

In 2016, the stock exchange commenced the T+2 settlement of share market trades. During the year, weekly and serial equity options started trading, and ASX was appointed as the administrator of Bank Bill Swap Rate (BBSW).

A symbol of American capitalism located in the financial district in New York. The street is home to some of the most influential banks, stock exchange, brokers, investment banks, and other financial companies.

It is collectively used in referring to the U.S. commodities market, bond market, stock market, foreign exchange market, and the futures market. In the 1700s, the street emerged to become a center of trade. However, the street became a hot topic when the nation’s top 24 brokers executed the Buttonwood agreement in 1792. The aftermath of WW I witnessed the emergence of Wall Street, New York against London to become the world’s most significant financial center.

In Australia, the financial regulation framework was majorly augmented by the Financial System Inquiry – the Wallis Committee. The recommendations laid down the specific function of three agencies.

In addition, the Department of Treasury in the Federal Government of Australia, apart from developing economic policies, works with all financial regulators on the Council of Financial Regulators that host ASIC, APRA & RBA.

Under the U.S. Department of the Treasury, the Office of the Comptroller of the Currency regulates the banking companies in the country, monitoring loan and investment portfolio, fund management, sensitivity to market risk, capital, earnings & liquidity.

Office of Thrift Supervision also works under the U.S. Department of the Treasury, supervising the federally-chattered savings and loan associations.

The Commodity Future Trading Commission is responsible for the supervision of a complex market in future contracts. It regulates all of the futures contracts, and its duties are not limited to commodity futures.

In Australia, the stock exchanges majorly host companies dedicated to the resources sector, including mining, energy, exploration and production. In addition, the financial stocks are home to the Australian markets since the 1800s, according to RBA.

The Australian markets are predominantly occupied by the resources and financial companies, currently accounting for close to half of the market by market capitalisation, according to RBA. The data from RBA also suggest that the Australian share prices have increased 6 per cent each year by a geometric average over the past 100 years.

In the US, the transport companies used to dominate the stock market a century ago with a 38% share in the market. According to media reports, the stock markets in the country are dominated by financial companies with a share close to 20% as of 2018. After financial, the composition is dominated by communications, information technology and consumer discretionary.

According to RBA, the dividend pay-out ratio in Australia is relatively higher than in the USA. The divergence had started to appear since 1987 (below figure) when the Australian policymakers introduced franking credits. 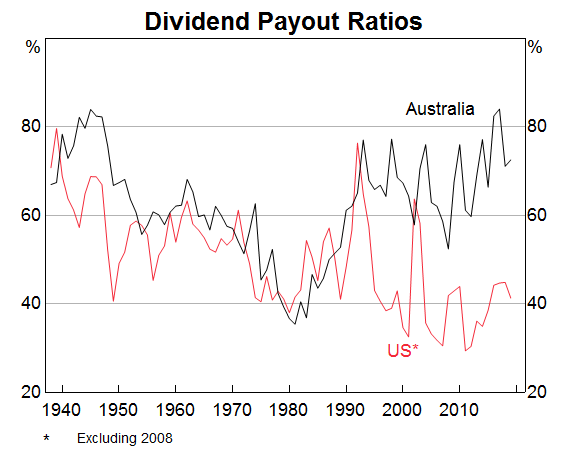 Prior to 1987, the dividend pay-out ratios for both the countries used to match closely, reflecting wider economic conditions. Since 1987, the divergence has been wider as dividends paid by the Australian companies remained higher compared to the US. Meanwhile, the US had chosen to return the shareholder value through share buybacks.

In the US, according to media reports, the dividend yield (S&P 500) have been falling over the past decade. In August, the energy sector had the highest dividend yield, followed by utilities, real estate & consumer staples. 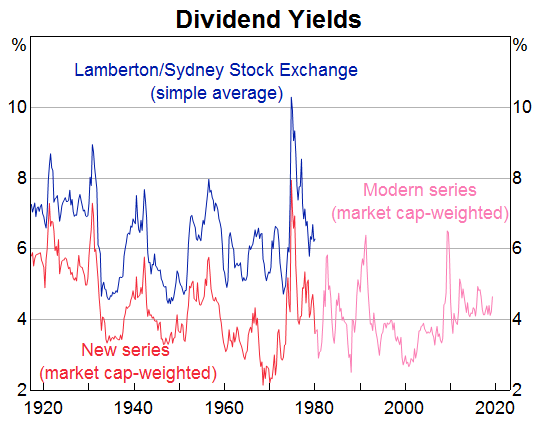 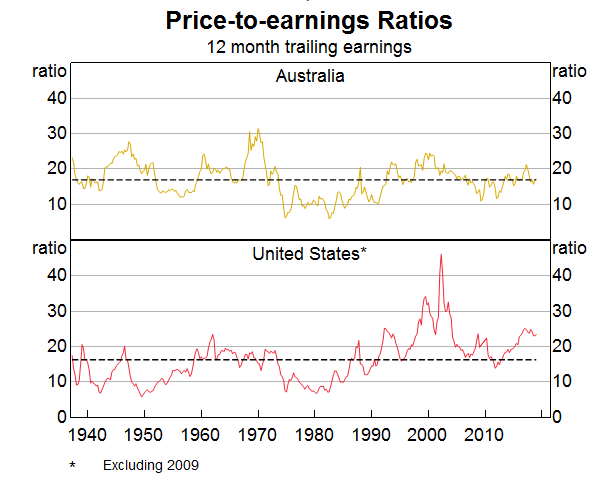