5 Dividend Stocks That Investors Have Been Bullish About

Dividends are the cash outlays from the company to its equity holders. Dividends play a major role in investors decision making and companies paying regular and with good dividend payout ratios are preferred by many investors. More on dividends could be read here. Let’s have a look at 5 dividend paying ASX listed companies. Dicker Data Limited Dicker Data Limited (ASX: DDR) operates as a wholesale distributor of computer software, related products and hardware. It was officially listed on ASX in 2011. Today, on 12th June 2019, the company provided notice to the market via a release about the change of its Director, Mr Vladimir Mitnovetski’s holdings in the company. Previously, he held nil indirect holdings and post today’s announcement, his indirect interest stands at 9,900, purchased at the consideration of $5.046 by Mitnovetski Pty Ltd. Launch of New Business DDR launched a new business, namely Dicker Data Financial Services, with an aim to address the increasing demand for: To put things into perspective, the Dicker Data Financial Services will be well placed against the financial solutions provided by the peers in the Australian ICT channel as the offering will be supported by the company’s own balance sheet. Previously, in another update, the company reported that it has been appointed as a Sole Distributer by Lenovo (Lenovo Datacentre Group). Separately, in Q1 FY19, the company reported total revenues of $386.9 million, reflecting a growth of 21.1%.

At market close on 12th June 2019, the stock of DDR was trading at a price of $5.420 per share, up 7.327% during the day’s trade with a market capitalisation of $815.19 million. The stock has provided returns of 5.65% and 76.57% in the time span of one month and six months, respectively. Its annual dividend yield stands at 4.12% with 100% franking. WAM Capital Limited WAM Capital Limited (ASX: WAM) is involved in making investments in the listed companies. WAM’s goals related to investment are to deliver a rising stream of fully franked dividend as well as to provide capital appreciation and preserve capital. It was officially listed on ASX in 1999. Recently, the company announced that one of its substantial holder, Wilson Asset Management Group has upwardly revised its voting power in the company from earlier 20.95% to 22.32%. Key Takeaways Shareholders Presentation The company is creating a difference by investing over $3 billion on behalf of more than 80,000 investors throughout the six listed companies. The investment landscape of the company consists of an increase in global PMI, equities outperformance, inflation pick-up and credit spreads, among others. Investment Update The WAM Capital, which focuses on small to mid-cap Australian companies, reported gross assets of $1333.6 million, with a fully franked dividend yield of 7.6%. The fully franked interim dividend of 7.75 cents per share was paid on 26th April 2019 by the company. The WAM Global reported gross assets of $478.2 million. 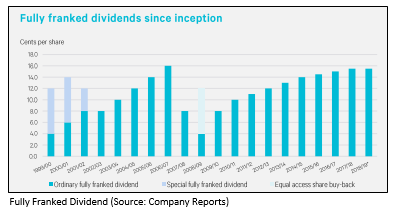 In addition, the WAM Microcap witnessed gross assets of $185.4 million. 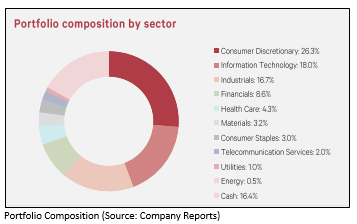 At market close on 12th June 2019, the stock of WAM was trading at a price of $2.030 per share, down 1.456% during the day’s trade, with a market capitalisation of $1.48 billion. The stock has provided returns of 3.26% and -6.36% in the time span of one month and six months, respectively. Its annual dividend yield stands at 7.52% with 100% franking. Tabcorp Holdings Limited Tabcorp Holdings Limited (ASX: TAH) is involved in the provisioning of gambling and entertainment services. It was officially listed on ASX in 1994. TAH concluded its combination with Tatts Group in December 2017 and created a world-class gambling entertainment group. The wagering and media contributed 45% to the total revenue of $5.2 billion in CY18, with lotteries and keno contribution of 49% and gaming services contribution of 6%. 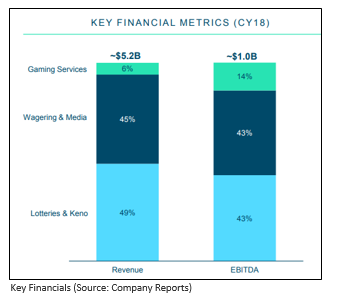 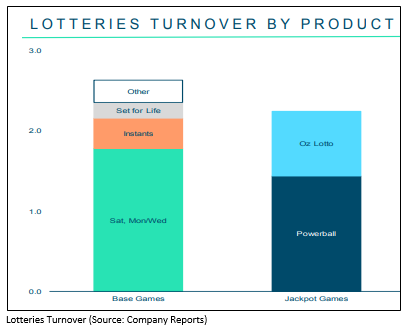 Outlook The FY19 initiatives include the introduction of Take a Break for TAB, the new Responsible Gambling site in order to improve customer experience and knowledge of its harm minimisation tools and the implementation of the National Consumer Protection Framework. At market close on 12th June 2019, the stock of TAH was trading at a price of $4.560 per share, DOWN 1.512% during the day’s trade with a market capitalisation of $9.35 billion. The stock has provided returns of 0.65% and 9.98% in the time span of one month and six months, respectively. Its annual dividend yield stands at 4.54% with 100% franking. Telstra Corporation Limited Telstra Corporation Limited (ASX: TLS) is a telecommunication and information services provider to domestic and international customers. It was officially listed on ASX in 1997. Recently, the company issued EUR 600 million bond with a coupon of 1.375% under the Debt Issuance Program Offering, which will mature on 26th March 2029. It will utilise the funding from the issue of bond for general corporate purposes. Separately, the company announced the appointment of Vicki Brady as CFO and Head of Strategy. Ms Brady has been the former Group Executive of Consumer and Small Business. Additionally, TLS made good progress on its T22 Strategy, which will likely result in non-cash impairment of legacy IT assets and increased restructuring costs in FY19. The total income of the company on a reported basis stood at $13.8 billion 1H FY19, reflecting a decline of 4.1%, while EBITDA on a reported basis witnessed a fall of 16.4% and stood at $4.3 billion in 1H FY19.

As per ASX, the most recent dividend of the company was 8 cents per share with Dividend ex-date and Dividend pay date of 27th February 2019 and 29th March 2019, respectively. At market close on 12th June 2019, the stock of TLS was trading at a price of $3.770 per share, up 0.533% during the day’s trade with a market capitalisation of $44.6 billion. The stock has provided returns of 8.70% and 23.32% in the time span of one month and six months, respectively. Its annual dividend yield stands at 3.33% with 100% franking. Westpac Banking Corporation Westpac Banking Corporation (ASX: WBC) is majorly engaged in the provisioning of financial services, which includes deposit-taking, payments services, etc. It was officially listed on ASX in 1970. To put things into perspective, the company declared an interim dividend of $0.0130 per security in relation to the securities of Incitec Pivot Limited. In addition, it has 0% franking with the Ex-distribution/Entitlement Date of 4th June 2019. The new completion payment for the period stood at $2.2362. WBC reported disappointing 1H FY19 earnings when compared to 2H FY18, wherein the company witnessed a decline of 19% in net earnings, while cash earnings also fell 14%. 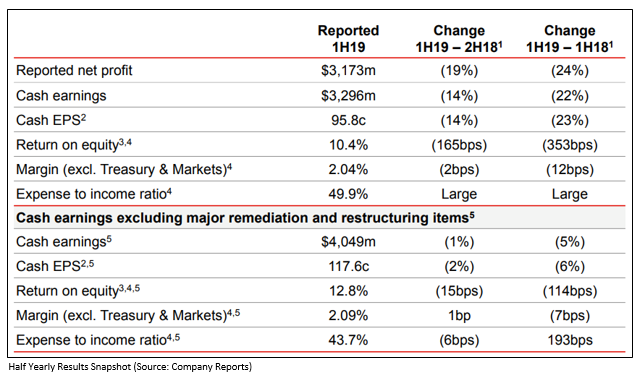