Super Retail Group Limited, Domain Holdings Australia Limited, Metcash Limited and Starpharma Holdings Limited have depicted a similar upward trend in generating a good YTD return. Let us have a view on the recent updates of these players listed on ASX:

The company has 688 stores operating under its 4 iconic brands, namely, Supercheap Auto, Rebel, BCF and Macpac. At the Macquarie Conference 2019 on 30th April 2019, the company unveiled the financial highlights of these brands as depicted below:

On the operations side, the company’s proposed Enterprise Agreement (EA) for almost 10,000 retail and clerical team members was approved in November last year. Though the agreement is operational, it is awaiting approval from FWC. The Saturday, Sunday and Late-Night penalty rates were increased and came into effect from 31st March 2019.

Looking at the trading side, the company provided an update on 30th April 2019. As per the update, its auto and sports businesses are performing as per expectations. Though BCF is undergoing pressure on margins, it has held to its top-line growth.

On 31st May 2019, the company announced that it has signed a binding documentation with TW Australia Holdings 2 Pty Ltd, which is the company’s JV partner. As per the deal worth $6 million, the company would divest its 50% interest in Compare & Connect, a utilities comparison and connection service. The deal would enable DHG to have a marketing services agreement (guaranteed and referral fees) with Compare & Connect.

Separately, in its presentation at the Macquarie Australia Conference 2019, the company gave a trading update, according to which its digital revenue for the quarter ended March was in line with the year-ago period. The total revenue, however, was down by almost 6% during the reported period.

New South Wales-based Metcash Limited (ASX: MTS) is a wholesale distribution and marketing company. With recorded sales of over $14 billion in FY18, the company is a market leader in Australia. The company serves independent retailers, offering marketing, operations and merchandise-based support through its hardware, food and liquor segments.

The company has the widest retail distribution network in Australia. 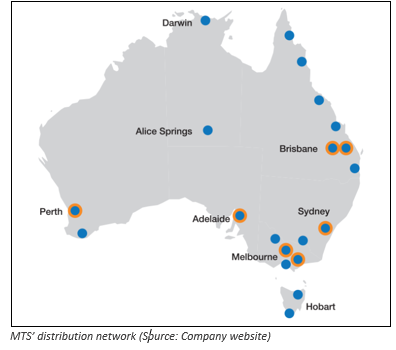 According to another update on 30th May 2019, Vinva Investment Management became a substantial holder of the company with 45,522,777 securities and a voting power of 5.01%.

Metcash Limited provided its strategy update on 4th March 2019. As per the release, the company was #2 in the liquor and hardware markets. Moreover, it has positioned itself as an alternative to other major players in the food business and depicted a strong balance sheet. The company plans to focus on a balanced approach to revenue growth and cost out during the next five years.

Below are the segment highlights:

The company’s sources and application of funds for FY20-FY24 have been provided in the figure given below: 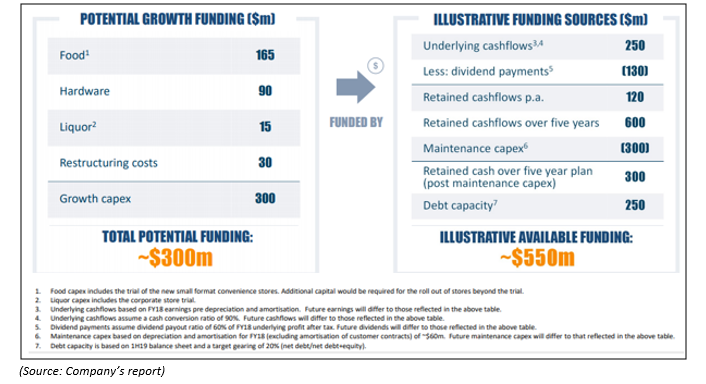 On the trading side, the food sales were slightly higher than the same period a year ago. While liquor sales in 2H19 were strong, aided by increased wholesale customer base. Hardware sales in 2H19 were soft, depicting the slow-down in construction activity in the trade sector.

On 4th June 2019, the company unveiled that the VivaGel® condom has been launched in Japan under the Zero Zero Three brand of Okamoto. In the country, this would be the first condom with antiviral coating.

Okamoto enjoys a dominating position in Japan’s condoms marketing business, accounting for a majority share in the country’s condom market. Japan is amongst the world’s largest condom markets, with an estimated value of $500 million per year. The company also has good market positioning in other Asian countries like Taiwan, Korea, China and Singapore.

In another announcement made with ASX on 3rd June 2019, SPL revealed a Development and Option Agreement with AstraZeneca. The deal is aimed at progressing with a DEP® version of an AstraZeneca marketed oncology medication, not disclosed yet. With AstraZeneca, this is the SPL’s 2nd commercial deal.

As per the agreement sealed during Chicago’s 2019 ASCO meeting, SPL is responsible for performing a preclinical testing of the DEP® variety of the AstraZeneca oncology product, while AstraZeneca has the right to exercise its option and licence the DEP® drug candidate for clinical and commercial development at any point in time. Moreover, USD 5m would be payable to the company as an option exercise fee, in such a case.

However, if AstraZeneca doesn’t choose to exercise the option, the company holds the option to license the drug development and commercialisation rights on its own or via a sub-licensee.

On 29th May 2019, the company made a presentation at the UBS Healthcare Conference. The company revealed that in 1H FY19, its revenue and income was A$0.7 million. The closing cash at the end of the period amounted to A$44.7 million. 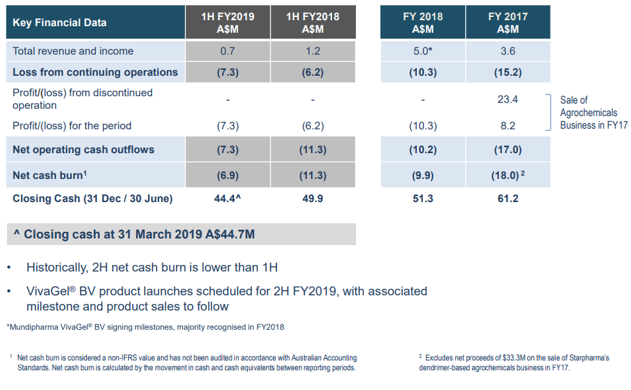 Understanding its product portfolio, the VivaGel® BV is licensed in more than 160 countries and on-market in Australia. The product is scheduled for launch in Europe in May/June 2019. DEP® is a proprietary nanoparticle drug delivery platform.

The company announced on 24th May that DEP® irinotecan has shown significant efficacy and safety benefits than the Erbitux® and Camptosar® in the irinotecan-refractory HT-29 human colon cancer model.

In a meeting held with the US FDA, the company received feedback regarding obtaining approval for the BV treatment and prevention of recurrent BV in the US. Since the company’s application/NDA entailed two related bacterial vaginosis indications, there were many options to get approval, as per the feedback shared by the agency. The FDA knows the key unmet needs of BV and SPL’s VivaGel® BV capability would aid towards the cause.