Australian major banking stocks are trading in negative territory at the start of the week amidst rise in the cases in Victoria and looming threat of the second infection wave.

The financial positioning and performance of key banks remained under the radar during the past few months. The uncertainty in the present scenario and implications of lockdown restrictions has resulted in massive income losses which could have a spillover effect on consumer borrowing and timely interest payments.

The current COVID-19 induced volatility has sent businesses and households into a tailspin, and the global economic recovery prospects appear bleak.

RBA expects national output to plummet by 8% during the current financial year, while the economy shrank 3% during March quarter.

The World Economic Outlook by IMF released in June 2020 indicated a grimmer scenario with global growth rate sinking to -4.9% compared to the initial April 2020 projected figures of -3%. 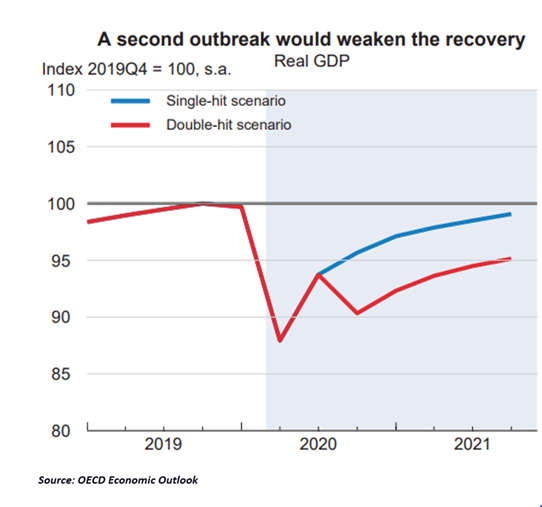 Reserve Bank of Australia deputy governor Guy Debelle, addressing Economic Society of Australia, indicated that RBA plans to withhold the current policies which would be ensuring that the borrowing costs remains low, while dedicated efforts are needed on fiscal front.

Notably, the Central Bank slashed the cash rate to 0.25% in March and has kept it on hold since then. Mr Debelle indicated that RBA plans on sustaining the policy measures and is targeting the inflation of 2-3% and meeting full employment target before it raises the cash rate.

He highlighted that yields on Government debt remain historically low, while the Government is borrowing at “record low global interest rates”. Moreover, despite the growing government debt, he expects inflation to stay below the target, while growth in the economy would mean that public debt as proportion of nominal GDP remains lower.

Meanwhile, analysts are observing enhanced prospects for the V-Shaped economic recovery in Australia. Furthermore, the possibility of negative interest rate has been negated by RBA.

Amidst the volatile market scenario, banking stocks, once market darling for income and value prospects, continue to dominate investors’ watchlist. The Australian banking sector has substantially recovered with S&P/ASX 200 Banks rising by ~20% in around past two months.

Let us look at reasons why banks are firmly positioned to offer the Investors some lucrative investment opportunities.

The COVID-19 scenario has further catapulted the tech-affinity in Australia. The adoption of fintech platforms by the Australian banks aligns with the readily soaring demands for digital payments during the lockdown with the young millennials leading the innovative drive.

For instance, Commonwealth Bank of Australia (ASX: CBA) teamed up with the Buy Now Pay Later Swedish provider to launch Klarna in Australia for competing against Afterpay (ASX: APT).

Digital transition has allowed traditional banking players to stay in the race while ensuring that they do not miss the revenue sources to the emerging platforms.

ALSO READ: Is there a bubble around BNPL Space – A look at APT, SZL, Z1P, OPY

Australia saw a 0.3% dip in GDP during the March quarter, which is comparatively much lower than many peer nations. While, the employment statistics for the country projects troubling conditions in the upcoming time, while the nation may witness rolling back of wage subsidies and aids gradually.

Although the economic downturn and job losses can be adverse in terms of loan defaults, many banks have taken up refinancing as a strategy to sail through the tough times.

Monthly Retail sales, in seasonally adjusted terms, jumped 16.9% during May 2020, indicating growing consumer confidence, which is expected to provide further support to the economy and the credit card related interest income to the banks.

While the policy rate decides the banks’ borrowings from RBA, this rate does not remain the sole factor for determining the interest on mortgages paid by the Australians. The banks’ cost of funding, which includes the cost of equity for the bank and interest rate paid on the liabilities, are highly governed by the cash rate. It means not all the cash rate change effect is directly passed on to the Australian borrowers or depositors.

The extent of influence cash rate has on banks’ interest rate margin remains a complicated process, with the interplay of many other factors including varying types of risks such as credit risk, liquidity risks and interest rate risks. Meanwhile, the offshore markets’ funding, competition and banking regulations also impact the bank rates.

The low cash rate by RBA can be used to ease the low-cost funding of the bank’s assets which would assist in repairing the balance sheets of generally highly leveraged banks via asset prices.

The banks also have the option to shift towards non-interest revenues such as fee-based activities which can be used to manage the loss of interest income and bolster the profitability of the banks. It would also help in enhancing the stability prospects for the banks.

Many Australian banks, in the wake of the COVID-19 disruptions and sudden uncertainty around the pandemic, allowed the mortgage owners to pause their mortgage payments for up to six months. Many borrowers adopted for mortgage holiday scheme during the pandemic crisis to manage the household expenses.

While many banks increased the repayments, others have raised the term, both leading to additional interest received by the banks.

The banks have been offering the holiday on a case-to-case basis which would also mean credit risks of the mortgage owners have been evaluated, providing support to the bank’s positioning. The Repayment holiday nearing end would mean that the banks are slated to start receiving their due payments, while defaults and further extension requests are also expected.

ALSO READ: How are the Big 4 Banks Placed?

Sliding real estate prices, job losses and other economic concerns seem like headwinds to the growth of the banking sector. In the face of impeding forces, major Australian banks are revamping their business strategies through refinancing options, mortgage freezing, and digital adoption to stay relatively stable in the current scenario.