Due to the global emergence of lithium-ion battery market, investors have been eying on companies which are having interest in Lithium exploration. Now, let’s take a quick look at few ASX listed lithium stocks that have significant updates today (i.e., 10 July 2019).

Junior exploration company, Koppar Resources Ltd (ASX: KRX) has signed a binding heads of agreement to acquire 100% of Vulcan Energy Resources, owner of the Vulcan Lithium Project which is located in the Upper Rhine Valley (URV) geothermal field in Germany. The Upper Rhine Valley field is one of the only heated brines globally that is uniquely enriched in lithium; hence the project is strategically located to cater the growing demand of lithium.

Following the release of this news, the share price of the company increased by 18.75% during the intraday trade.

The project comprises two granted licenses and three license applications covering a total area of approximately 78,600ha as depicted in the figures below. 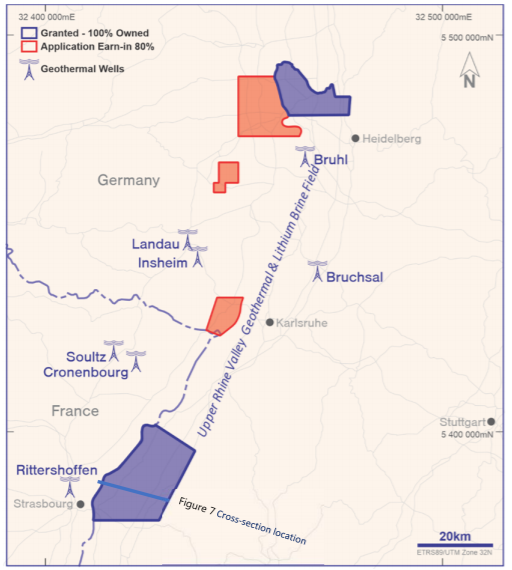 From Vulcan Project, the company intends to produce battery-grade lithium hydroxide from geothermal brines, with a renewable electricity “by-product”.

The project is situated in a geothermal field of operational geothermal plants, currently producing stable baseload, renewable energy. The only other known geothermal field in the world with similar lithium grades is the Salton Sea, California, where Controlled Thermal Resources is developing the US$1.8B CAPEX Hell’s Kitchen lithium-geothermal deposit.

In parallel with the transaction, the Company has also proposed to raise A$1.1 million at $0.15 per share which will be used to fund due diligence and initial work at the Vulcan Lithium Project.

The results have successfully outlined extensions to the primary lithium mineralisation up to 800m north, an encouraging news for the company from exploration perspective as it increases the value of the project.

Notable results from the drill holes include:

In the phase 1 of its diamond drilling program, the company had successfully identified a lithium mineralised zone measuring 3,000m x 1,000m. 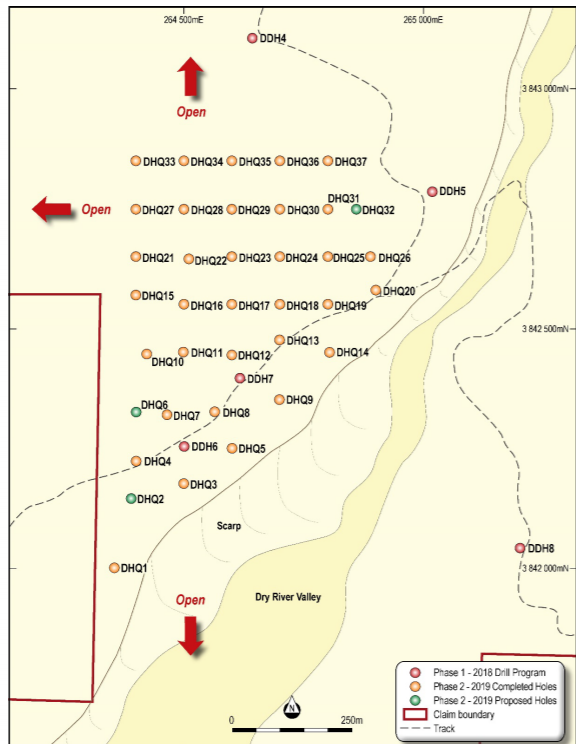 On 10 July 2019, lithium chemicals producer, Lepidico Ltd (ASX: LPD) made an announcement stating that its 24-hour operation of the Pilot Plant has commenced and the first lithium sulphate liquor intermediate has been produced.

As per the company’s release, following the receipt of replacement polypropylene filter cloths that were sourced locally in Perth, Western Austral, Pilot Plant leach discharge filter operations were restarted.

The impurity removal circuit of L-Max®, a technology that extracts lithium and recovers valuable by-products from less contested lithium-mica and phosphate minerals, has been commissioned on leach liquor, allowing continuous plant operations to commence on 9 July, marking the commencement of Pilot Plant Campaign 1.

The company is expecting to produce around 4,000 litres of lithium sulphate liquor. This lithium will be stockpiled for LOH-Max™ development trials, which are scheduled during the September 2019 quarter. The company has confirmed that its Plant operations are within the operating cost budget.

The company recently announced that its wholly owned subsidiary will acquire all of the outstanding common shares of Desert Lion Energy which is a Toronto based emerging lithium development company.

Mali Lithium Limited (ASX: MLL), formerly known as Birimian Limited, has provided an update on the application process for the Exploitation Permit for its wholly owned Goulamina Lithium Project in Mali.

The Operational Summary of the Goulamina Lithium Project can be viewed in the below table.

In April 2019, the company submitted the exploitation Permit application and since then it has been working closely with La Direction Nationale de la Géologie et des Mines (DNGM) to ensure that all technical and regulatory requirements are met.

Recently, the company was informed by the DNGM that the application has passed the technical review phase. The application is now moving to the next approval phase which involves assessment and sign off by the Minister of Mines, Mme Lelenta Hawa Baba Bah. But before this, the company is required to pay the Founders Fee in accordance with the State of Mali’s 2012 Mining code.

In the March quarter, the company reported net cash used in operating activities of $1,151k which includes $1,445k of cash spent on exploration & evaluation activities, $104K spent on staff costs and $600k spent on administration and corporate costs. Further, the company reported cash flow from financing activities of $174k. At the end of the 2019 March quarter, Mali Lithium Limited had cash and cash equivalent of $4,130k.

It was estimated that in the June quarter, the company will spend $795k on exploration and evaluation, $100k on staff costs and $600k on administration and corporate costs.

MLL’s shares were up by 6.25% during today’s intraday trade.