In this article, we are discussing four stocks listed on the ASX. Three of these company are from the metals and mining sector that are mainly gold, nickel and copper focused players. One company is a healthcare sector player, which has disclosed full-year results and final dividend for FY20. 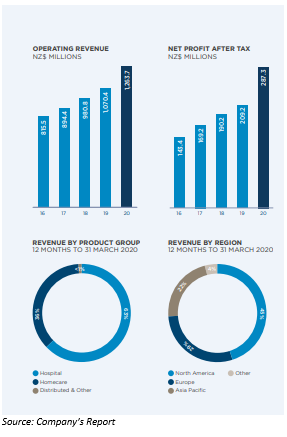 Increase in revenues was mainly driven by its OptiflowTM nasal high flow therapy, products to treat COVID-19 patients, and strong hardware sales during the year. Operating revenue of the hospital product group was NZD 801.3 million.

Its revenue from the homecare product group increased by 9% to NZD 457 million. Gross margin of the business was down by 73 bps to 66.1% due to an increase in air freight costs on raw materials to accelerate manufacturing and start-up costs of a manufacturing plant in Mexico.

For FY21, the company is expecting full-year operating revenue of approximately NZD 1.48 billion and NPAT of ~NZD 325 million to NZD 340 million.

As on 30 June 2020, shares of Western Areas contracted 2.99% over the past five days and surged 14.04% in the last one month. Last week, the company announced promising results from the initial diamond drilling at the Sahara Prospect at its Western Gawler Project in South Australia.

It was reported that initial drilling intersected over 200m of nickel and copper sulphides. The first drill hole was completed on the Iluka farm-in and joint venture ground. Dan Lougher, MD, stated that the company targeted this area because of geological similarities to other nickel/copper deposits (Nova-Bollinger and Nebo-Babel).

Now, the company looks to test the western contact of intrusive body. WSA is prioritising logging and assaying for the recovered core to ascertain grade distribution of nickel-copper-PGE at the host intrusive.

The company also planned a follow-up hole to test other conductors. The second hole seeks to test for higher sulphide concentrations around the interpreted conductor. It has engaged down-hole electro-magnetic (DHEM) contractors, which would allow to optimise additional hole locations for further mineralisation.

Western Areas also maintained its 19.9% stake in Panoramic Resources Limited (ASX: PAN), which successfully closed a capital raising program. WSA was issued with around 108.6 million additional shares, as it was a sub-underwriter of the retail entitlement offer.

Saracen Mineral Holdings, which was added to S&P/ASX 100 index this month, has awarded additional work to GR Engineering Services Limited (ASX: GNG), with a combined value of $29 million. GNG secured an EPC contract for the Thunderbox Paste Plant Project and variation works for the Carosue Dam Operations Plant Expansion Project.

In May, Saracen Mineral released a presentation, highlighting guidance of over 500k oz for FY20 and over 600k oz in FY21.

Its unaudited NPAT for the March quarter was between $65 million and $70 million, taking the FYTD range to $145 million to $150 million.

In the June quarter, the company expects accrual for ~$32 million related to stamp duty that would be expensed in FY20. Also, it would undertake the final valuation of historical stockpiles and purchase price allocation/D&A during the June quarter.

Earlier this month, the company provided an update on Black Butte Copper Project, which is located in Montana, US. The update highlighted that the company’s subsidiary completed a four- and half-year technical assessment and permitting process in April this year.

The company has an 85% stake in the Black Butte Copper Project via interest in Sandfire Resources America Inc. The project is an advanced, high-quality underground copper project in Tier-1 location.

Some groups in Montana have legally challenged resource development at the site. Its subsidiary, Sandfire Resources America Inc. would challenge the litigation. Sandfire is committed to proceed with feasibility study for the project to consider mining and financing decisions.

In May, the company released a presentation, unveiling guidance of 70-72kt Cu and 38-40koz Au in FY20. At the end of March, SFR had $242 million in cash with no debt. Sandfire is committed to create a diversified and sustainable mining company.

The company is progressing with optimisation of T3 Copper-Silver Project Feasibility Study, and ESIA approval is expected soon with Mining Licence Application to follow.

(All currencies in AUD, unless or otherwise stated)