The global cobalt market continues to evolve rapidly with the rollout of lithium-ion batteries creating a profound change in cobalt demand. In today’s environment, the demand for batteries is a far cry from humble beginnings in the late 1990s, namely consumer electronics such as laptops and mobile phones. As per Cobalt Blue Holdings Limited (ASX: COB), a single Electric Vehicle (EV) today contains more cobalt than 1,000 laptops.

Cathode stability remains a priority for the battery makers (avoiding battery overheating), and cobalt cost (as a % of the total battery bill of materials) is relatively smaller for phones, laptops and tablet makers. However, for EV manufacturers, cobalt remains an expensive component of the bill, given the size of the batteries involved.

Let’s take a quick look at some of the cobalt related stocks trading on ASX.

The drilling has confirmed the presence of both massive and disseminated cobalt-nickel sulphide mineralisation within the region. Further, parallel structure to the main zone with high-grade Co-Ni mineralisation was discovered in the central section of the adit, which has defined over 100m strike length. Modelling is being conducted to define the potential offset position of this mineralisation.

The results obtained from the drilling in conjunction with the geological logging is utilised to refine the exploration targeting model and understanding of the controls of mineralisation.

In terms of further exploration, the company has informed that the geological modelling is being revised based on the results returned to refine the exploration targeting model across the strike length of Joremeny. As per the release, further exploration within the Joremeny Adit will be planned upon completing this targeting review.

The company recently announced that 10,000,000 options exercisable at $0.0624 have expired unexercised.

A cobalt exploration/development company, Cobalt Blue Holdings Limited (ASX: COB) has developed a detailed understanding of the battery market and the specifications required to service the same. Ever since the company completed its Pre-Feasibility Study (PFS), it has been advancing the metallurgical program for the Broken Hill (Thackaringa) Cobalt Project. The company has been treating 45t (wet basis) of RC drill chips through a pilot-scale concentrate circuit, recently completed in the month of June 2019.

The company achieved 90% recovery of cobalt to concentrate, confirming Pre-Feasibility Study results at a 50x larger scale. The overall recovery of cobalt was 90% and cobalt grades in the gravity and flotation concentrates were remarkably similar, ranging from 4,444 ppm to 5,075 ppm, confirming that the cobalt content in the host pyrite mineral was consistent across the range of ore grade samples.

The company believes that cobalt demand growth will average over 9% in the coming decade. A breakdown of the forecasted cobalt demand over the period of 2017 (Actual) and 2026 (Forecast) is depicted in the image below. 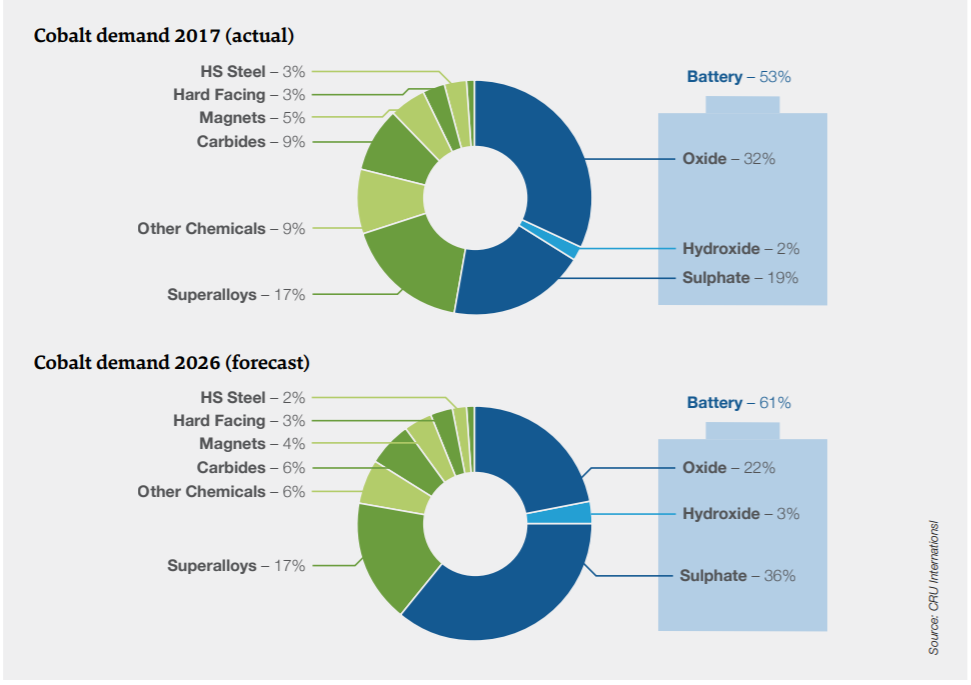 A resource company, Northern Cobalt Limited (ASX: N27) recently announced that its ‘1 for 3 Rights Issue’ at 5 cents per share, with one free attaching option for every 2 shares subscribed closed on 17th June 2019. The maximum number of shares offered under the issue was 20,937,802, resulting in a shortfall of 18,361,402 shares.

The company recently completed an assessment of the potential for iron ore to contribute to the Snettisham Project, which is located on the coast, in close proximity to a deep-water channel, which is capable of hosting Cape class and Panamax vessels. The Snettisham Project is uniquely situated to take advantage of Snettisham Hydroelectric Power Plant.

The company earlier communicated that before the end of June 2019, it will commence a three-hole diamond drilling program, testing the validity of the magnetic model and geophysical exploration target. As per the historic metallurgical test, the Snettisham material has a potential to produce a high grade and quality magnetite concentrate of 66.1% Fe, 2.85% TiO2, 0.66% V2O5 and < 0.01% P.

During the March quarter, net cash used in operating activities amounted to $594k, which includes $441k of exploration and evaluation expenses, $89k of staff costs and $71k of administrative and corporate costs. At the end of the March quarter, the company had cash and cash equivalents of $527k.

This announcement was released to the market after the successful completion of due diligence by the company. Meanwhile, the company  agreed to proceed with a 5?year option to acquire the advanced gold?rich Jones Hill VMS deposit.  This acquisition is providing new exploration and growth opportunities for the company.

In order to put things into perspective, the company has already applied for drilling permits, the approvals of which are expected to land in the fourth quarter of 2019. With only one diamond core hole drilled at the Jones Hill Deposit since 1984, and multiple under?explored VMS prospects located along strike from the Jones Hill Deposit, the company has excellent potential to discover the additional mineralisation.

The company intends to take a two?pronged approach to advance the Tererro VMS Project, targeting:

(i) Rapid completion of work programs at the Jones Hill Deposit so that mine development can be advanced as quickly as practicable; and

During the March quarter, net cash used in operating activities stood at $778k, which includes $613k of exploration and evaluation expenses and $165k of administrative and corporate costs. At the end of March quarter, the company had cash and cash equivalents of $307k.

On 30th April 2019, the company announced a capital raise of approximately $2.2 million (before costs) via underwritten non?renounceable entitlements issue of 2 fully paid ordinary share for every 5 existing shares to eligible shareholders held at 6th May 2019. This placement was later completed, as announced on 27th May 2019.