At the time of writing on 17th October 2019, the benchmark index S&P/ ASX200 is placed at 6,684.7 points, down 0.77% with respect to the previous close. Some stocks have experienced a decent price movement in the recent past. In the article below we will be having a greater discussion on a few such companies.

Acknowledgement in an Edition of Australian Financial Review

The company through a release dated 16th October 2019 has noted a report on WOR in Australian Financial Reviewâs edition:

In another update, the company announced that Director Andrew Peter Wood has acquired 135,854 ordinary shares on 1st October 2019, which has led to change in his holdings in the company.

A look at Business Update

Steadfast Group Limited (ASX: SDF) provides services to Steadfast Network brokers and is into distribution of insurance policies through insurance brokerages as well as underwriting agencies.

An Update on Takeover Bid for IBNA

In another release, the company mentioned that 1,344,020 fully paid ordinary shares have been issued at the $3.7733 per share on 20th September 2019 pursuant to a dividend reinvestment plan. 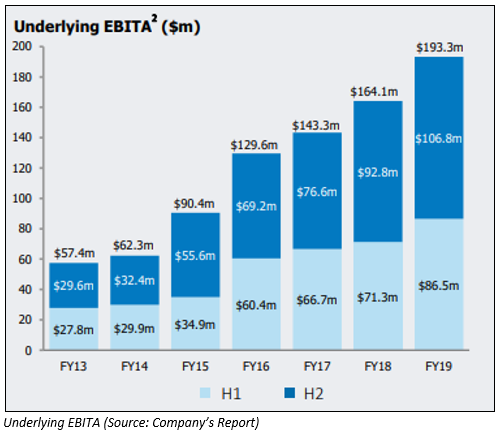 Austal Limited (ASX: ASB) is engaged into the design, manufacture as well as support of high-performance vessels for commercial and defence customers globally.

The company recently announced that it would be holding its 2019 Annual General Meeting on 1st November 2019 and following will be the key agendas for discussion:

In another update, the company advised the market participants with the price of ordinary shares will be $4.19 per share, which are to be issued under dividend reinvestment plan for FY19 final dividend.