3 Large-Cap Utility Stocks Starting With ‘A’ – AGL, AST And APA

Australia’s energy sector continues to undergo disruption driven by policy uncertainty, technology change, an accelerating shift to renewables, and increasing customer engagement. In the light of this, let’s take a quick look at the performance of three 3 Large-Cap utility stocks starting with ‘A’.

Australia’s largest ASX-listed investor in renewable energy, AGL Energy Limited (ASX: AGL) is focused on shaping a sustainable energy future for the country. The company has a robust generation asset base, with more than 3.6 million customer accounts and a robust financial position, which allows it to be flexible at the time of volatility and uncertainty.

Consistent with these priorities, the company is developing, directly or with its partners, a $1.9 billion of new energy supply projects, with a further $1.5 billion of projects subject to feasibility.

A key contributor to AGL’s 180-year heritage has been its ability to invest in the long term and ride new waves of growth. Following a strategic review, the company has identified compelling opportunities for AGL to allocate capital to drive value along three horizons:

In the first half of FY19, AGL reported a statutory profit after tax of $290 million, which was 53% lower than pcp, reflecting a negative movement in the fair value of the financial instruments. The company reported underlying profit after tax of $537 million, which was 10% up on pcp, reflecting the benefit of higher market prices for wholesale electricity, offsetting margin pressures from continued elevated levels of customer churn, lower customer prices, the delivery of customer affordability programs and higher costs to support future plant availability at AGL’s coal-fired power stations.

Recent Updates: Earlier, the company was planning to acquire Vocus at $4.85 per share via a Scheme of Arrangement and had already received exclusive access to conduct due diligence on Vocus Group Limited. However, later, the company ceased the due diligence on Vocus Group and withdrew its non-binding, indicative proposal as the company was of the view that this acquisition does not represent sufficient certainty of creating value for AGL shareholders.

Recently, the company provided an update on its Crib Point gas import project, wherein it reported that in the second half of FY22, the company expects to deliver first gas from the proposed AGL Gas Import Jetty, which is encouraging news for the company and its shareholders.

On 18th June 2019, the company appointed highly experienced Christine Corbett to the role of Chief Customer Officer. In her 27 years of experience, Christine held several large leadership roles at big companies. Her appointment is a significant addition to the company’s leadership group.

For the financial year ended 31st March 2019, AusNet Services Limited reported solid performance while making good progress in the refinement and implementation of its strategy. During the year, the company maintained a disciplined approach to costs and enhanced the efficiency of its operations, delivering financial results within market expectations.

During the year, the company made significant progress in its transition from being a network operator to becoming a customer-focused commercial service provider managing dynamic networks. For the financial year ended 31st March 2019, the company reported revenues of $1,861.5 million as compared to $1,909.8 million in the previous year. For the period, the company reported a profit of $253.9 million and EBITDA of $1,134.2 million.

The five-year financial summary of the company can be seen in the below table. 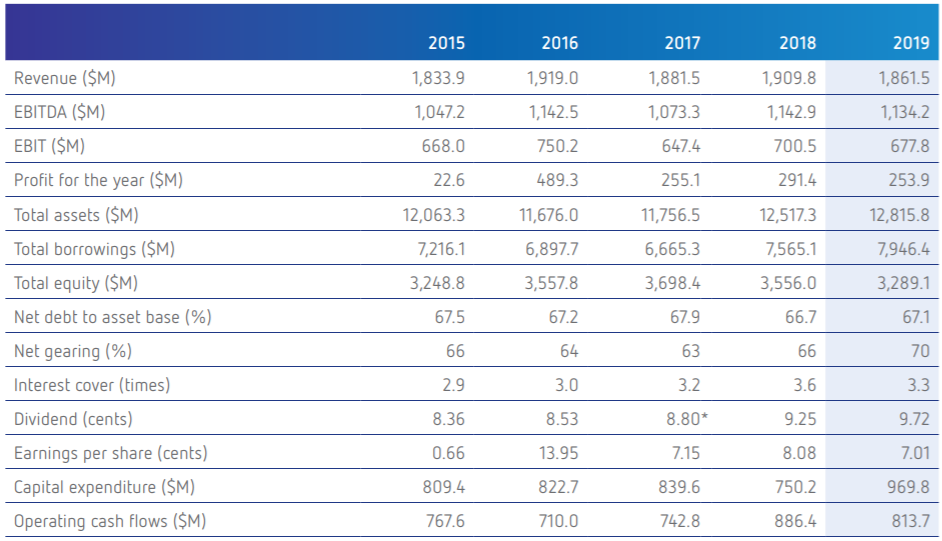 The company’s five key objectives include:

For future growth, the company is actively exploring new technologies, which facilitate customer interaction with the grid and with other customers. This includes distributed generation and electric vehicles, both of which are likely to impact the energy sector significantly.

Recently, the company announced the resignation of its Company Secretary and Executive General Manager Governance, Claire Hamilton, as she wanted to pursue a career opportunity outside the energy sector. The company’s Chief Financial Officer, Adam Newman is also leaving the company as announced on 28th June 2019. Adam Newman will be working with AusNet Services till 20th September 2019.

The company recently signed a three-year extension to an existing gas transportation agreement (GTA) with Incitec Pivot Limited (ASX: IPL), supporting the continuing operation of IPL’s Gibson Island manufacturing plant. It is expected that the agreement will commence on 1st January 2020.

The company recently appointed highly experienced Rob Wheal as the next CEO and Managing Director of the company. The commencement date of his appointment was 6th July 2019, and he will be paid a total fixed remuneration of $1,600,000.

In March 2019, the company announced the pricing of GBP 400 million 12.3 year medium term notes, which will be issued by APA’s wholly-owned Baa2/BBB rated borrowing entity, APT Pipelines Limited. The settlement of the notes is expected to occur on 18th March 2019, and the proceeds from the issue will be used to refinance debt maturing in May and July 2019, and for general corporate purposes.

In the first half of FY19, the company produced solid financial results, which includes:

The uplift in the operating cash flow was due to the increased receipts from customers and a reduction in interest cost offset by an increase in cash tax paid during the period.

The company’s EBITDA by business segment can be viewed in the table below. 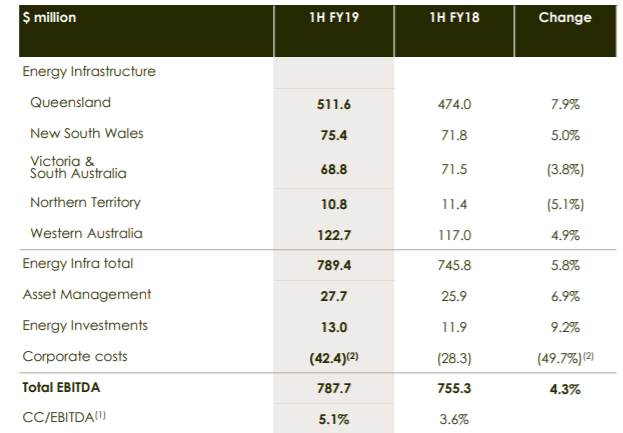 At the release of 1H FY2019 results, the company confirmed that it is on track to deliver its FY19 EBITDA within the upper end of the guidance range of $1,550 million to $1,575 million.