Australia is privileged with a good number of graphite focused ASX-listed companies with projects at various stages of development, particularly overseas in Europe, Mozambique and Tanzania. Here, we are discussing a few graphite players and their recent developments.

Syrah Resources Limited (ASX: SYR) is an industrial minerals and mining company based in Australia. The company is engaged in the operation and development of the Balama Graphite project in Mozambique. The company’ principal activities also include the sales of natural flake graphite and ongoing development of logistics, sales and marketing arrangements with the targeted customers. The company is focusing on its downstream Battery Anode Material strategy and is progressing well on that front. SYR, in December 2018, accomplished its first production of spherical graphite in the plant located at Louisiana, USA. Extensive product certification test work has been done by the company with various big battery producers.

The company recently confirmed, as on 14th June 2019, that JPMorgan Chase & Co. and its affiliates have ceased to be a substantial holder of the company.

SYR Q2 2019 Interim Update: The company recently, came up with an update about its expected production and pricing situation for the second quarter of current financial year.

The company’s cash position has been forecasted with no change at approximately US$43 million at the end of 2Q FY19.

Q1 2019 Quarterly Activities Report: Total graphite production in 1Q FY19 came in at 48kt, up 45% on a sequential basis, depicting production consistency and delivery from ongoing optimisation programs. Graphite sold and shipped in 1Q FY19 at 48kt saw sequential growth of 30% with sales revenue of US$2.5 million. The weighted average price for graphite was experienced at US$469/tonne.

Kibaran Resources Limited (ASX: KNL) is engaged in the exploration and evaluation of its graphite projects in Tanzania, pre-development of the Epanko Graphite Project, development of sales and marketing arrangements with targeted customers and the development of downstream processing technology for the use of natural flake graphite to manufacture purified spherical graphite products for lithium-ion batteries.

The company recently confirmed the accomplishment of the studies by GR Engineering Limited for developing a battery graphite production plant in WA’s Lithium Valley. Upfront capital cost has been estimated at US$22.8 million for an initial 5,000 tpa with an additional US$49.2 million to increase the production to 20,000 tpa of battery-grade graphite. The procurement and process of the graphite will be done at the Kwinana facility from different suppliers, which will be sold abroad to lithium-ion battery customers in Asia, Europe and the US. The study also forecasted the pre-tax net present value of US$141 million for Kwinana plant, generating an internal rate of return of 36.6% and post annual EBITDA of US$35 million.

The company recently received the nod from the Tanzanian Government related to the proposed Epanko debt funding arrangement. The planning of the project financing and related UFK cover application to the German Government are under process, which are likely to take many months to get completed.

March 2019 Quarterly Report: The company recently released its activities and cash flow report for the three months ended 31 March 2019, where it highlighted the robust financial metrics for 20,000tpa production plant with initial investment of US$64 million, pre-tax NPV10 of US$194 million or $268 million and IRR of 49.8%, and annual EBITDA of US$42 million or $58 million. Cash at the end of March 2019 stood at $1.01 million, with a further $1.069 million received subsequent to the end of the quarter on completion of the Share Purchase Plan and Share Placement.

Outlook: Demand for long-term battery (spherical) graphite is positive with Benchmark reporting EV penetration rates rising to 25% by 2025 from 2% in 2018, necessitating ~600,000 tonnes of battery (spherical) graphite, >6x the volume currently produced. In addition to EV market demand, energy storage is likely to drive new demand, and Bloomberg New Energy Finance (“BNEF”) reports that the battery storage costs have fallen by more than 1/3rd over the last 12 months, mainly on the back of a 35% reduction in the cost of lithium-ion battery storage. 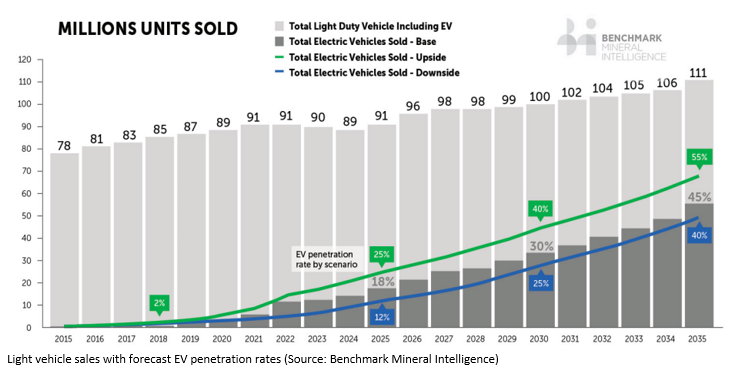 In another update, the company received a certificate from AusIndustry, comprised of R&D program in and outside Australia.

At the current market price of $0.125, the market capitalization of the company stands at $39.5 million. The stock was down ~7%, taking cues from the response by KNL to ASX query. The stock has generated a negative return of ~21% in the last one-year.

Renascor Resources Ltd (ASX: RNU) is engaged in the exploration and evaluation of the Siviour Graphite Project near Arno Bay, South Australia. The company mainly focuses on the development of economically viable deposits containing graphite and other minerals.

The company recently announced that, for Siviour Graphite Project, it has adopted ODP (Optimised Development Plan), which increases the production profile of the stage one processing capacity by ~4x.

The company has forecasted that ~60% of the estimated capital expenditure for stage one OPD is likely to qualify for Dutch ECA cover. The revised plan is based on a two-stage approach to reach a production of 145,000t per annum via the staged construction of two similar?sized processing plants. This two staged approach builds on the production cases considered in the PFS and attempts to minimise upfront capital requirements by funding the second plant through projected cash flow from the first stage, while still maintaining a low projected operating cost and adopting a procurement strategy focused on high quality equipment to ensure reliability of performance, reduced maintenance expenditures and higher confidence in the production processes.

The company is parallelly working on DFS (Definitive Feasibility Study), which is based on the ODP. The schedule for the DFS has been updated to permit a pre?completion review as part of an ongoing financial due diligence. Outcomes from the DFS is likely to be available in the month of July. 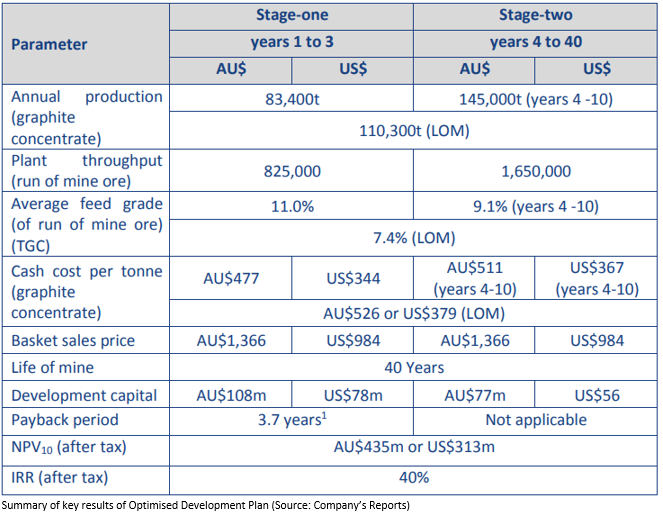 At the current price of $0.021, the market capitalisation of the company comes in at $24.22 million. The stock is inching towards its 52-week high of $0.027. Looking at the historical price performance, the stock has gained ~31% on YTD basis, whereas it has yielded a negative return of ~19% in the last one year.