3 Energy Stocks To Watch Out For - BPT, WOR, CTX

Energy stocks are of those companies that deal in the production and supply of energy. Players engaged in oil and gas reserve exploration and development in addition to other activities such as drilling and refining fall in this category.

We are discussing three energy stocks that have a steady business model and decent product presence. All the three stocks have a good dividend payout history along with a decent dividend yield ratio. Let’s look at the performances of BPT, WOR and CTX.

Beach Energy Limited (ASX: BPT) is engaged in the production and exploration of oil and gas in geographies like Australia and New Zealand. The company has exploration assets and several ownership interests in strategic oil and gas infrastructure in addition to a processing facility in Moomba and Otway Gas Plant. The company is headquartered in Adelaide, South Australia.

Recently, Cooper Energy (ASX: COE) made an announcement regarding the spudding of Dombey-1 onshore gas exploration well in PEL 494, in which COE has a 30% interest, while BPT has a 70% interest.

As per the management guidance, BPT is expecting production of 27 - 29 MMboe for FY20, while capital expenditure is expected at a range of $750 – 850 million. The management has guided underlying EBITDA to be in between $1.25 billion and $1.40 billion.

The company has also upgraded its five-year production target to 34 – 40 MMboe from the previously unveiled target of 30 – 36 MMboe. The company will continue to invest additional $1.5 billion in value accretive opportunities in the coming years.

On 07 October 2019, WOR informed that one of its directors named Andrew Peter Wood acquired 135,854 ordinary shares, resulting in the change is director’s interest in terms of vesting of performance rights and share price performance rights in accordance with the company’s Performance Rights Plan.

The company is scheduled to hold its annual general meeting on 19 October 2019. 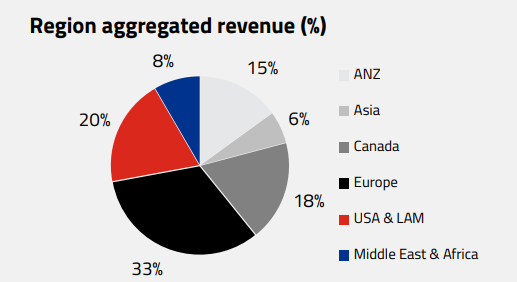 The management guided that energy, chemicals and resources market indicators and growth in backlog provide evidence of continued improvement in market conditions. However, several challenges like global macroeconomic uncertainties may act as negative catalysts for the business. The management also expects that in FY20, the business is likely to witness the benefits of the acquisition of ECR including the realisation of cost, margin and revenue synergies.

Caltex Australia Limited (ASX: CTX) is a fuel supplying company with more than 2,000 company-owned or affiliated sites in Australia. 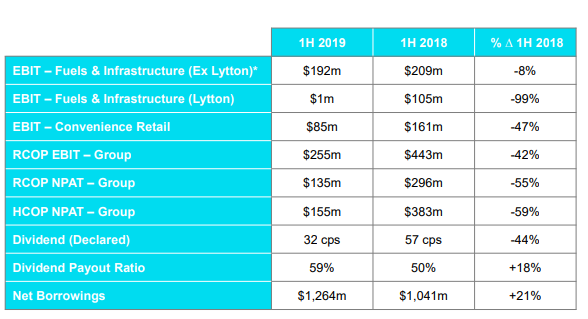 As per the management guidance, 2019 CRM sales expected at ~5.5BL, due to earlier advised closures and economic decision to lower feedstock purchases. The company expects that freight differential and premiums for Australian grade products provide ongoing protection to Lytton's earnings. The company has downgraded its 2019 capex to $300 million. CTX will continue expansion across Gull New Zealand and Seaoil in the Philippines. The company will divest ~50 sites to maximise value to shareholders. The company has guided of a dividend payout ratio of 50-70% in FY19.