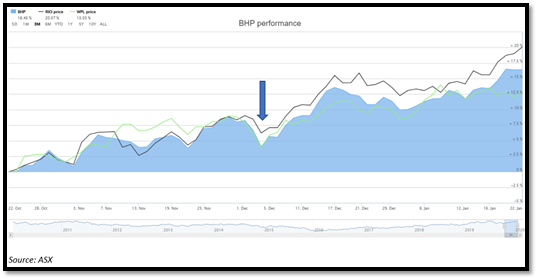 On 4 December 2019, the major surge was seen in the metal and mining stocks after the U.S president commented; “Trade talks with China were going well”. It was well noted from the above performance chart that the shares prices of all the three companies i.e. BHP Group Limited, RIO Tinto Limited and Woodside Petroleum Limited, have increased and reached closer to their 52-week highs.

The S&P ASX 200 index also surged recently and many analysts believe that the optimism over a planned signing of a preliminary Sino-U. S trade could be a major reason behind this gain.

Let us have a look at three stocks from the metals and mining sector and recent updates which impact their share prices.

BHP Group Limited is a leading metals and mining company. The company is a producer of various commodities such as iron ore, copper, uranium etc. BHP Group is headquartered in Melbourne, Australia and is officially listed on the Australian Securities Exchange.

On 21 January 2020, the company has announced the activity report for the half year ended 31 December 2019; a few highlights of the company’s activities are as follows; 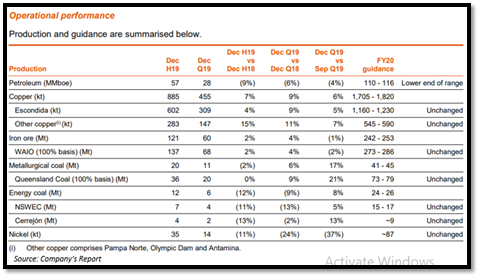 On 5 December 2019, the Cooper Energy Limited (ASX: COE) has announced the acquisition of the Minerva Gas Plant by the participants in the Casino Henry joint venture. The plant has been acquired from the Minerva Joint Venture participants after the cessation of production from the Minerva gas field which was announced on 3 September 2019. The plant has a processing capacity of up to 150 TJ/day and can process liquid hydrocarbons.

The plant has been acquired from the Minerva Joint Venture participants in which BHP Petroleum has 90 per cent interest and Copper Energy has 10 per cent interest. Cooper Energy and Mitsui have acquired the plant to process gas from the Casino, Henry and Netherby gas fields and the project is expected to be completed by mid-2021 and is subject to FID and other approvals.

Rio Tinto Limited is an Australia-based, metal and mining company. Headquartered in London, and founded in 1873, the company has an interest in mining of coal, copper, aluminium, gold, iron-ore, uranium etc.

On 17 January 2020, the company has released its Q4 2019 production results, a few highlights of the results are as follows;

On 30 December 2019, the company has initiated a process to resume operations at Richards Bay Minerals (RBM) in South Africa. This follows discussions led by the Premier of KwaZulu-Natal, Sihle Zikalala, involving all stakeholders in order to address issues faced by the community and for ensuring a stable environment.

The process has been re-initiated with RBM expected to return to full operations in early January, leading to regular production in early 2020. The company is contacting customers who were informed of cessation of supply that has now been lifted.

Woodside Petroleum Limited, headquartered in Perth, Australia is the leader in the LNG industry in Australia. The company produces and explores oil and gas from offshore and onshore facilities in Western Australia and Northern Territories. The WPL product portfolio includes domestic gas, liquified petroleum gas (LPG), liquified natural gas and crude oil. Recently, the company has been awarded contracts for Scarborough Project, the details of which can be accessed here.

On 16 January 2020, the company has announced the fourth quarter result for the period ended 31 December 2019; a few highlights of the report are as follows;