In this article, we discuss six stocks from three industries – healthcare, technology and retail- some of the leading names in their respective industries. And, these companies are included in numerous Australian indices.

With festive and holiday season on the run, Super Retail Group’s busy time has arrived, and the group might be leveraging its brands to deliver a superior outcome. In the past, the group had updated the market with October trading update.

CEO & Managing Director – Mr Anthony Heraghty stated that the group has a positive start to the year. However, the consumer sentiment remains mixed, and in response to the subdued consumer sentiment, the group launched a higher level of promotional activity across businesses that have delivered sales growth but impacted margins adversely.

Further, it was noted that the like-for-like sales growth reflects the promotional activity undertaken by the retailer and pricing strategies, while it targets to maintain the balance in sales and margin.

In addition, the group remains confident that the Macpac brand would deliver the shareholder value as more stores are opened, augmented by growth in digital sales and an increase in brand awareness in the Aussie market. More importantly, the interim results of the group are dependent on the Christmas period.

In late November 2019, the group convened its 2019 Annual General Meeting. CEO – Mr Daniel Agostinelli stated that the group has had an amazing journey over the last five years, having transitioned from integration of acquisitions to innovation in its core segments. 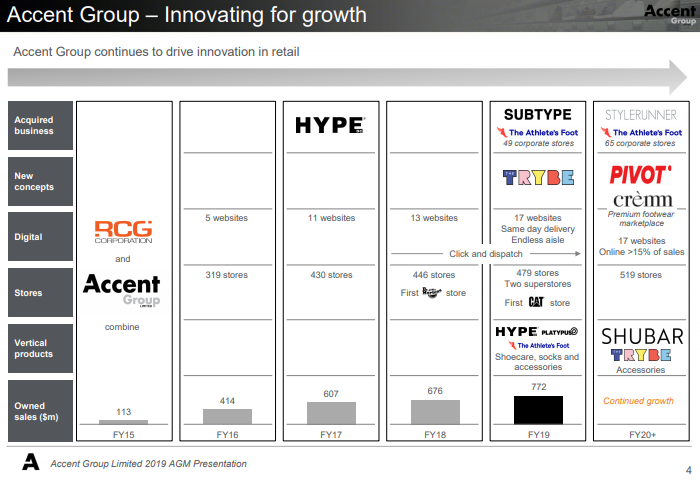 The group has been focusing on new concepts and targeted acquisition to improve its market share in the $5 billion footwear market, and the group has delivered a record profit in FY 2019.

While shedding light on the trading outlook, it was said that the group is targeting profit growth in FY20 backed by low single digit like for like growth, momentum in digital sales, new store and The Athlete’s Foot corporate stores.

Also, the group mentioned that like-for-like sales have been consistent with the expectations, and cost of doing business and gross profit margin percentage is likely to be in line with the last year.

It is anticipated that PIVOT, The Trybe, Cremm and Stylerunner would be profit neutral in FY20 after implementation costs. Moreover, the group said that the previous outlook remains unchanged.

In November 2019, the company convened its 2019 Annual General Meeting. In FY 2019 ended 30 June 2019, the company implemented clients across all its key regions and enjoyed growth across both Wealth Management & Funds Administration business units.

It was said that the clients of the company are managing over $2.8 trillion of assets under administration on Bravura technology, directly or indirectly. Bravura has invested over $160 million in its product Sonata.

Further, the company remains well-positioned to deliver on its long-term commitments, and sales opportunities in its markets remain resilient which includes the UK, Africa, South Africa and Australia.

On FY20 trading, the group mentioned that FY 20 is initiated on a positive note backed by demand from existing clients, a pipeline of new sales opportunities and interest in Mindwinter’s offerings.

It was reiterated that the previous guidance for FY20 of mid-teen growth in NPAT, excluding the impact of acquisition is consistent with expectations. And, the acquisitions are expected to augment NPAT in order of approximately $3 million in FY20.

With over 20 years of experience, the company is into the development of datasets for machine learning and artificial intelligence. It continuously collects data to improve its AI systems.

Last month, the company upgraded its full-year earnings for the period ending 31 December 2019. It was said that Underlying EBITDA for the period is likely to be in the range of $96-$99 million.

It was noted that the given upgraded forecast translates November & December performance at AUD/USD rate of 0.68. Previously, the company was expecting to report an Underlying EBITDA in the upper end of $85-$90 million.

Further, the company’s improved performance in FY 2019 is credited to higher monthly relevance revenues and margins, majorly from existing projects with current customers. And, the full-year earnings are subject to change due to factors including project timing from major customers and AUD fluctuations.

In October 2019, the company convened its 2019 Annual General Meeting. The Chairman of CSL Limited – Mr Brian McNamee stated that the company started with a small group of very talented people in 1994. (now approx. $126.04 billion entity by market cap as on 6 December 2019).

And, the FY19 total dividend was up by 18 per cent over the previous year in AUD terms. The growth in profits reflects the focus on delivering innovative medicines to people around the world and the successful execution of strategy.

For FY20 outlook, the company expects strong demand for its plasma and recombinant therapies, and there would be a one-off adjustment on the recognition of albumin sales due to the transition into company distributor model in China.

Also, the company expects FY20 NPAT to be in the range of $2,050 million to $2,110 million in constant currency terms. In constant terms, revenue growth is expected to be around 6 per cent.

Recently, the CEO of the company – Mr Philippe Wolgen, released a letter to the exchange. It was stated that the company had obtained first and historic US FDA license approval, and the valuation of the company increased drastically, followed by a sell-offs.

In the quarter-ended 30 September 2019, the cash receipts of the company stood at $9.78 million, and net cash from operating activities increased by $5.38 million. The cash reserves were impacted due to the payment of full-year franked dividend of $0.025 per share. Also, the overall cash flows continue to be positive with cash and cash equivalents, increasing by $4.06 million to $58.33 million.