The automobile industry in Australia, just like the global automobile industry, has been struggling for almost two years. The 2019 sales figures corroborate this statement. According to the industry body Federal Chamber of Automotive Industries (FCAI), in 2019, 1.06 million vehicles were sold, a decline of 7.8% compared to 2018 numbers.

Total vehicle sales for December 2019 were 84,239, a 3.8% decline compared to December 2018 figures. December 2019 marked the 21st consecutive month of falling sales. The sales numbers reported by VFACTS, the industry’s statistical service, are the lowest since the 2011 numbers.

The major reasons for the sluggishness in the industry include a struggling economy, tightening financing policies and the intense environmental factors. Besides, some experts believe that an increase in the use of car rentals and ridesharing has a negative impact on the sales of personal vehicles.

To halt the continuous decline in the automobile industry, the Australian Government has taken several initiatives. However, it is unlikely that there will be a quick turnaround and the industry is likely to face similar challenges in 2020 as it did in 2019.

FCAI spokeswoman stated that 2020 is expected to be like 2019 with the industry unlikely to improve in the first half of 2020.

According to an industry expert, the issues for the new vehicle market in Australia in 2020 are likely to be the same as last year. The expert believes that there will be a few positives such as ease in financing, and improvement in customer sentiment, especially in the case of electric vehicles (EVs), that has been the only saving grace in an otherwise gloomy environment.

However, some experts highlight limited growth in wages, low throughput and growing household threats as key factors that could hinder the industry’s recovery.

Given the challenges in the current scenario and the unlikelihood of a quick turnaround, vehicle sales in 2020 are expected to remain flat as compared to 2019 with an expected increase in EV sales offset by a decline in fuel-based vehicles.

In this article, we will look at the two of the biggest stocks in the automotive retail space – APE, and ASG:

AP Eagers Limited is engaged in the sales of new and used vehicles, sales and distribution of spare parts and accessories, and servicing and repair of vehicles. The company also aids in finance and leasing and offers an extension of warranties on the vehicles. AP Eagers runs its operations through a group of dealerships spread across the country.

In a recent trading update, AP Eagers announced that its underlying operating profit before tax was down 6% for the period January – October 2019, indicating that the sluggish market scenario has had an adverse impact on its performance.

On 18 November 2019, APE released an Investor Presentation on AP Eagers UBS Australasia Conference held on the same day, wherein it mentioned that despite a decline in its underlying operating profit before tax, its historical performance indicates that the company can withstand the challenging external environment. The company believes that industry changes such as accelerating transition and challenges faced by OEMs will only help it.

AP Eagers has been focusing on streamlining its business through a series of deals in the last few months. The company announced that on 05 November 2019, it concluded the sale of its Newcastle and Hunter Valley region’s freehold properties for $52.9 million. The sale to Tony White Group will generate a PBT of ~$13.4 million.

Also, APE notified that Tony White Group completed the acquisition of Kloster Motor Group from AP Eagers on 01 November 2019. The sale from AP Eagers is likely to generate a PBT of $20 million.

In addition, the company announced on 24 October 2019 that it had completed the acquisition of all outstanding shares of AHG bringing its ownership to 100%.

Autosports Group Limited is a part of the retail automobile sector with an emphasis on sales and distribution of new and used luxury vehicles. The company is also engaged in the vehicle repair and servicing and selling of spare parts. In addition, on behalf of retail financers and automotive insurers, Autosports delivers finance and insurance products.

In his address at the Annual General Meeting on 29 November 2019, Autosports’ CEO, Nick Pagent said that despite the gloomy environment for the automotive industry, the company managed its expenses to put it in a stable position ahead of 2020.

He also highlighted a few points from the financial results of the company which are as follows: 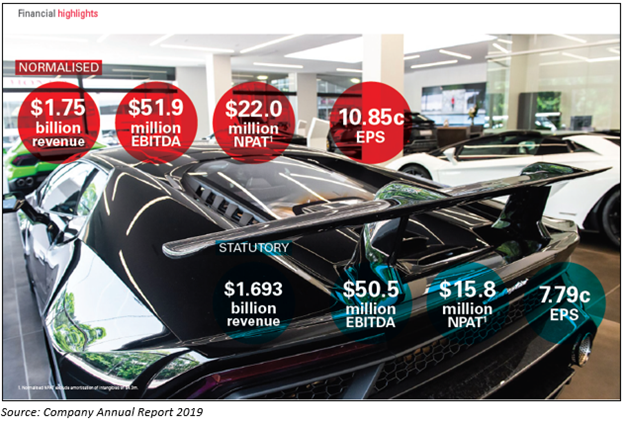 On 04 November 2019, Autosports announced the acquisition of Trivett’s business at Alexandria for ~$9 million. The Alexandria business includes six luxury dealerships such as Rolls Royce, Jaguar, McLaren, and Bentley, among others.

The company’s CEO, in his message to the shareholders, stated that Trivett’s business is expected to provide revenue and NPBT of $80 million and $1.2 million, respectively for FY 2020.