Forum: Forum is a medium or place where people discuss a topic/subject/problem that is of public interest or there is a buzz in the market.

Online Forum: Online forum is just like a normal forum, with the discussion over the internet via messages. The conversation occurs on a thread.

There are generally four types of forum.

Pros and Cons of Online Forum:

In this article, we would be looking at two companies which provide an online platform where the users on similar interests come together. Let us have a look at the recent updates from these companies.

SportsHero Limited (ASX: SHO) is a company operating in the communication services domain, offering a sports gaming platform to its clients, where they can predict, interact and compete on major sports virtually and in real time. The company aims to create the largest social community dedicated to sports in the globe. As the world’s leading sports prediction app, the company offers monetary and other prizes. SportsHero Limited’s headquarters is located in Lota, Australia. 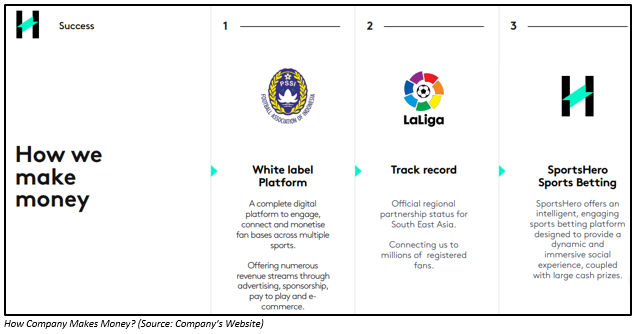 On 21 June 2019, the company made its app, ‘Kita Garuda’, live and available for download on Google Play. The company had unveiled its white label Mobile Application, ‘Kita Garuda’, on 18 June 2019 in an ASX announcement. The application, which was developed by the company for the Football Association of Indonesia (PSSI), went live and made available for download on Apple App Store on 18 June 2019. It is the first ‘white-label’ bespoke branded platform of SHO.

On 25 March 2019, SportsHero Limited reached an exclusive agreement with PSSI or Football Association of Indonesia. PSSI, which is one of the largest sports federations in the world, has 80 million engaged fans, more than four leagues and 128 teams. PSSI is wholly owned and controlled by the Indonesian Government. Under this agreement, the company is the exclusive provider and partner for developing the first official platform for PSSI. The platform includes social media, merchandise/e-commerce and game highlights, in addition to live streaming, featured video stories and player access.

PSSI is set to boost the marketing spend and promote the Mobile App aggressively through giant scoreboard screens at games, billboards, advertisements on MAXstream and televisions as well as through press conferences. The advertisements will be played in giveaways and merchandise stores, as well as through social media. Meanwhile, as part of the agreement, SHO will provide advisory services to the federation related to marketing strategy. The federation will also take care of costs associated with the marketing of the mobile application.

Indonesia has 130 million social media users, 177 million mobile users and 120 million mobile social users. In the Asian country, out of the total smartphones, more than 88% are Android smartphones. Making ‘Kita Garuda’ mobile app available through the Google Play forms an integral part of market penetration strategy of the company.

SportsHero Limited now focuses on building the PSSI user base. Post which, the company would be implementing paid digital advertising as a part of its monetization strategy. This platform launch might result in the company entering into similar agreements with other leading football as well as sports leagues across Asia and beyond Asia in the future.

Incorporated in 2016, HotCopper Holdings Limited (ASX: HOT) provides the users with a stock trading as well as investment Internet discussion forum. Every stock that is listed on the Australian stock exchange has a dedicated forum on HotCopper, where the investors can share their views. Also, the corporate spotlight clients are provided with a dedicated column where they can share the sponsored company material. It has a registered member base of more than 315,000, with over 730,000 visitors a month. It is the largest ASX discussion forum of Australia and is based in Perth.

Recently on 14 June 2019, the company released an announcement related to the change in the interests of a substantial holder. The previous notice was given on 30 April 2019. On 11 June 2019, the change in the interest of the substantial holder, Somers Limited (and associates) was made. Earlier the holder was holding 24,056,728 shares of the company and had 22.49% voting power. Now, the holder is holding 25,367,352 shares and has the voting power of 23.71%.

The balance sheet of the company witnessed a slight fall in the net asset, as a result of an increase in the total liabilities. The total shareholders’ equity for the period was $3,422,858.

The company also paid a dividend during the period. By the end of 1H FY2019, HotCopper Holdings Limited had net cash and cash equivalents worth $2,825,724.