If you want to invest in the stocks, you must be aware of the positive and negative aspects of investment. Investing throughout multiple asset classes, sectors, and locations aid the investor to handle his/her risks efficiently. It also aids in narrowing down an array of results amid anticipated and best return. Further, it would aid in cutting down the dependency on just one investment.

Diversification is a risk managing method that combines a wide variety of investments within a portfolio. It helps to reduce the risk taken by an investor with the distribution of the capital into various sectors. Sometimes, investment does accomplish what the investor has been expecting from it; however, there are times, when an investment does not give the return as per the anticipation.

In this article, we would be discussing CSL from the Health Care sector and SWM from Communication services sector as follows:

Formed in 1916, CSL Limited (ASX: CSL) is into manufacturing, research and development of the products across regions like Switzerland, United States, Australia, and other countries. CSL’s businesses comprise of CSL Behring, CSL Plasma and Seqirus.

Further, CSL updated the market with CSL’s Chairman, Brian McNamee speech, wherein he mentioned that the company’s solid performance last year, reflected its goal towards the people all over the world. CSL has an aim protect public health and patients suffering from various ailments. He added that the company directly deals with the government and via active membership in industry. It offers its share of contribution to public policy by getting involved with establishments concerning patients and so forth. 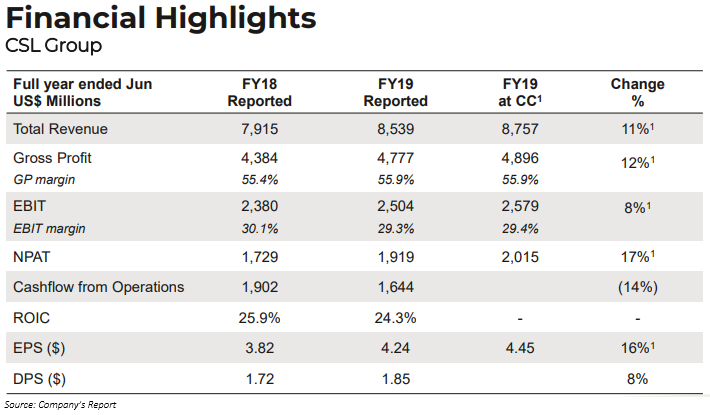 The company expects FY20 NPAT to range between US$2,050 – US$ 2,110 million at the rate CC or constant currency, which would be a growth of ~ 7 per cent – 10 per cent over FY19 period. The company’s Sequirus business would deliver in accordance with previous guidance, deriving benefit from process improvement and product differentiation.

SWM is a diversified media company and has a prominent presence in broadcast television, along with print mediums like magazine and newspaper. SWM was officially listed on Australian Securities Exchange in 1992.

Recently, the company has notified the date for Annual General Meeting to be held on 13 November 2019.

On 14 October 2019, the company provided its response to the query raised by the ASX, which came up amid media speculation with respect to its magazine stakes. SWM mentioned that no binding agreement had been concluded and would be subject to regulatory approval and obtaining further consents on it.

On 10 October 2019, the company released a notice for the retirement of Mr Peter Gammell and The Hon. Jeff Kennett AC who would be retiring from the Board at the end of this year’s AGM, to be held on 13 November 2019.

On 6 September 2019, the company updated that S&P Dow Jones indices has removed the company was removed from S&P/ASX All Australian 200, effective from 23 September this year.

On 20 August 2019, the company notified on the financial results and below are the highlights of the results;