In a market update provided on Tuesday, 4 February 2020, ASX-listed energy company Eon announced that the Muddy Formation has been perforated in the Govt Kaehne #9-29 well, with fracture stimulation commenced on 31 January 2020. The company is the operator of the well, with a 61% working interest. 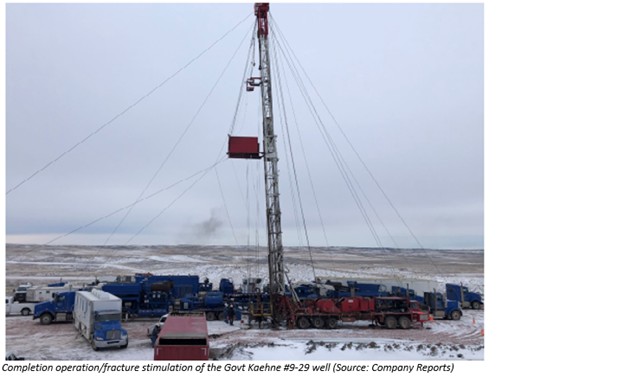 In order to complete the Muddy Formation, Eon brought in a completion rig to the site where a cast iron plug was set to temporary abandon the Dakota formation. Following this, the casting was perforated with 19-gram guns with 4 shot’s per foot across the Muddy Formation (6,075’-6,084’).

To increase permeability and deliverability of the Muddy reservoir, the fracture stimulation of 1,200 barrels of 20# X Link Gel and 63,000# of 20/40 white frac sand was performed.

The well was then flowed back for 18 hours to a frac tank recovering 258 barrels of fluid. Swabbing operations were implemented to boost the flowback recovery time, resulting in the recovery of further 146 barrels of fluid.

As per the update, 34% of the original fluid has been recovered and the last 6 swab runs averaged 30%- 40% oil cut. The company is currently performing swab operations to recover the remaining stimulation fluids and size out surface pumping equipment.

In an earlier update provided on 9 January 2020, Eon confirmed that the Dakota Formation has been perforated with 4 shot’s per foot across three intervals between 6,322 feet and 6,345 feet.

Drilling operations of the Govt Kaehne #9-29 well commenced with spudding of the well in November 2019. The well was drilled using the Capstar #311 rig, which reached a total depth of 6,460 feet in eight days, two days ahead of schedule. The surface hole was drilled and cemented to 2,050 feet with 8 5/8-inch surface casing within one day of drilling commencing.

Following this, a 7 7/8-inch directional hole was drilled to TD intersecting both the Muddy Formation and the Dakota Formation. The mud logs from both formations demonstrated multiple oil & gas shows.

Wireline logs were run after reaching total depth and these were sent for further petrophysical analysis by an independent service company. A completion rig was mobilised to site on 18 December 2019 and cement bond logs were run to evaluate the integrity of the cement behind the production casing. After this, the Dakota Formation was perforated, and the company started concentrating on completing the more attractive shallower Muddy formation.

The perforation of the secondary target brings Eon NRG a step closer in expanding its existing production capacity. Meanwhile, the company continues to evaluate production and drilling opportunities and expects to acquire additional production/drill additional wells in 2020.