Australia-based Aspire Mining Limited (ASX: AKM) is engaged in the exploration and development of its world-class metallurgical coal (coking coal) resources in Mongolia’s Northern Provinces. The company had a busy 2019 whereby it continued to focus on advancing works at its flagship Ovoot Coking Coal Project (100%-owned), having the second largest coking coal reserve in the country, with the broader objective delivering long-term returns to its shareholders while also ensuring social and economic upliftment of the local communities.

The year 2019 commenced with a Chinese metallurgical Coal market and pricing expectations Review and Report by Fenwei Energy Information Services Co Ltd for the period to 2025 (as part of the PFS). The Coal Quality Competitive Assessment of the Ovoot Early Development Plan (first-stage development of the Ovoot Project) by Fenwei forecasted a balanced overall metallurgical coal market scenario in China wherein the demand for quality “Fat” Coking Coal is expected to rise, with Hebei Province expected to offer some of the highest value markets.

Fenwei also estimated a long-term price forecast range of RMB 1,217 (USD 176/t) to 1,307 (USD 191/t) per tonne to be delivered to customers. A supply gap of 16-22 Mt per annuum was identified for the concerned period, presenting a good opportunity to capitalise on.

Other viable markets, in addition to China and close to Ovoot, include Russia, Far East Russia as well as Eastern Europe. It is noteworthy that the Russian Railways has introduced new lower rail tariffs which the company may benefit from. 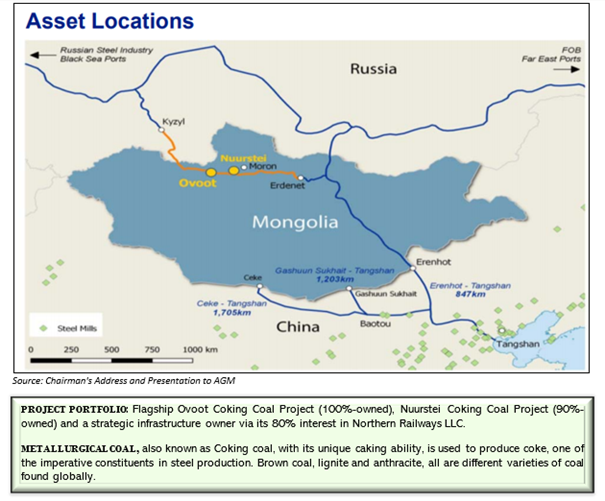 A truck and rail operation (including a haul road) is also being established under the OEDP for the delivery of 4 Million tonnes per annuum of coking coal to end markets followed by further expansion of operations with the construction of Erdenet-to-Ovoot Railway connectivity, being currently supervised by Aspire Mining’s subsidiary, Northern Railways LLC.

In February 2019, Aspire Mining announced a robust set of financials from the OEDP Pre-Feasibility Study (PFS), completed in collaboration with Fenwei and suggesting a compelling economic case (a base case and an extended case). More on the same can be READ here.

The fully-funded Definitive Feasibility Study (DFS) had also commenced in March 2019 and expected to be finalised around May 2020 to inform the Board for a decision to mine, subject to receiving the mandatory community agreement and permitting approvals, as indicated so far.

In October 2019, the management visited a few steel mills in North East China and reported to have received an encouraging response with a number of them having used/ currently using Mongolian sourced coals previously.

Thereafter in November 2019, Aspire Mining announced improved financial outcomes for the OEDP Extended Case including a mine plan, largely demonstrating the value that would be delivered to shareholders with the execution of this project.

Meanwhile, the company continued to progress with the funding discussions, engaging with potential debt and equity providers through the year. On 3 December 2019, the company settled a placement to Mr Tserenpuntsag, in lieu of $ 33.5 million consideration for the 1,595.9 million shares issued at 2.1 cents each to increase his investment stake from 27.5 % to 51 % in Aspire Mining. The placement was approved by an overwhelming majority of Shareholders at Aspire Mining’s Annual General Meeting held in Perth on 29 November 2019.

He is the owner of / built the largest internet service provider in Mongolia, enjoys the exclusive distributorship of Pepsi in the country and holds a major stake in Mongolia’s largest satellite TV business. He is a successful entrepreneur and businessperson with an impressive track record of establishing large scale businesses in the country.

Mr Tserenpuntsag had committed to offer strategic and financial aid for the materially de-risk delivery of the OEDP, on the back of strong business and government relationships across all levels in Mongolia, to benefit not just the company shareholders but all the people in the country.

Provided that the permits and funding are secured by Q1 2020, Aspire Mining informed that it would begin with pre-stripping of waste at Ovoot from Q3 2020.

Aspire Mining closed the year 2019 with the receipt of $ 2.75 million from Mr Tserenpuntsag, who exercised 15.3 million options at 18 cents per option, taking the company’s cash at bank to around $ 43 million with zero debt.

Stock Performance: Aspire Mining has a market capitalisation of around AUD 65.99 million with approximately 507.64 million shares outstanding. On 15 January 2020, the AKM stock settled the day’s trading session at AUD 0.130.