In a latest development, gold explorer Ardiden Limited (ASX:ADV) has provided updates from a continuing compilation, reprocessing and interpretation of historical data across its entire 664km2 landholding, encompassing 120km of under-explored strike, at the Pickle Lake Gold Project area. The high-grade Pickle Lake Gold Project is located in Ontario, a Tier 1 mining jurisdiction.

The Company is ranking its various Gold Prospects at Pickle Lake as Historical Non-JORC Estimates; JORC 2012; Brownfield and Greenfield areas. Till date, the Company has discovered 19 Gold Deposit and Prospect areas to systematically progress at the project, with Kasagiminnis being the most advanced gold deposit with JORC (2012) inferred resource of 110,000oz @ 4.3 g/t to 300m.

In addition to the Kasagiminnis, Dorothy and Dobie gold deposits, the Company has identified four under-explored Brownfields Prospects alongside deep historical gold mines and 12 highly prospective Greenfield prospects, as demonstrated in the below table: 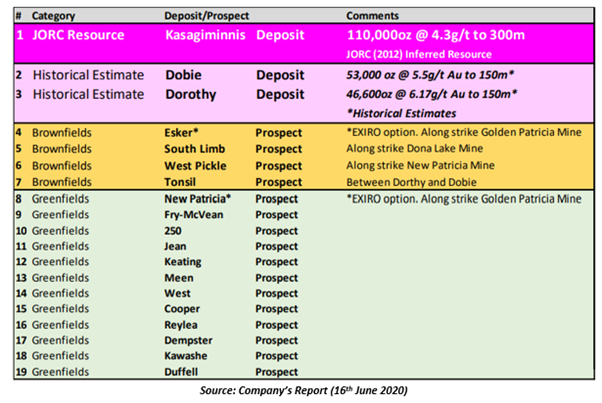 More than 100 new geophysical targets have been discovered at the Kasagiminnis, Dorothy, Dobie and South Limb deposits from extensive litho-structural interpretations of reprocessed aeromagnetic dataset.

Previous owners of Dorothy and Dobie completed historical estimates at these two gold deposits during 1987-1990, undertaking the following work at deposits:

Dorothy Deposit Estimate by Major General Resources (1990): Diamond core drilling, comprising 39 holes for 7,026m, was conducted with a maximum depth of 323m, that resulted in identification of gold mineralisation over a strike length of 1,200m. However, the historical resource was estimated to a maximum depth of 150m below surface.

Dobie Deposit Estimate by St Joe Corp., Canada (1988): Diamond core drilling, comprising 37 holes for 5,129m, was undertaken with a maximum depth of 291m, that resulted in identification of gold mineralisation over a strike length of 1,000m. 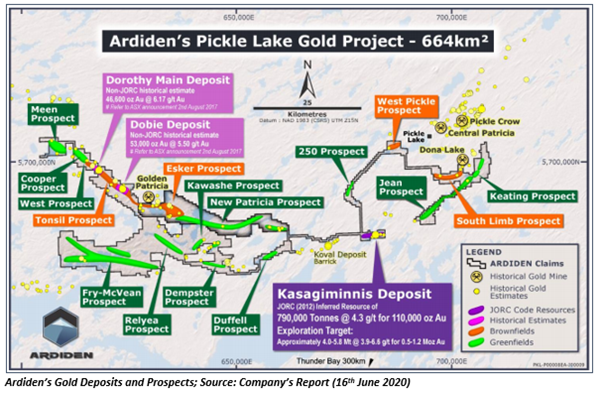 Historical assessments by previous owners yielded an aggregated non-JORC historical estimate of 99,600 oz Au at 5.7g/t Au at Dorothy and Dobie. The historical estimates were summarised in an NI43-101 Technical Report on Gold Properties within the Pickle Lake area in 2009, as follows:

Prior to re-stating these historical estimates in line with existing ASX guidelines¸ Ardiden conducted an in-depth study of the area’s geology and mineralisation with the appointment of MD & CEO, Mr Rob Longley in May 2019.

Gold Mineralisation at Dorothy and Dobie

The Dorothy-Dobie mineralised zone at Pickle Lake depicts a larger mineralised system than presently delineated at the Kasagiminnis deposit, which has an Exploration Target of 0.5 - 1.2Moz Au. Ardiden intends to implement modern airborne geophysical targeting along the trend prior to groundwork and targeted drilling.

Gold mineralisation at Dorothy and Dobie occurs along strike from the historical Golden Patricia mine, along a 20 km long north-westerly trend, and includes the Dorothy Main, Tonsil, Spike, Meen, Cooper, West and Dobie Prospect zones.

Moreover, gold mineralisation styles across Pickle Lake vary in terms of host rocks, alteration types and mineralisation controls. Over decades of exploration, numerous geophysical methods have been applied across Pickle Lake, including shallow ground EM, ground magnetics, airborne EM, aeromagnetic and induced polarisation. These surveys were conducted either as a matter of course or to detect direct geophysical targets – valid or non-valid to the local mineralisation style.

At Dorothy and Dobie, Ardiden is currently communicating with the First Nation groups associated with this area to form an agreement to carry out additional drilling exploration work at the deposits. The Company is also reprocessing geophysical data while planning new airborne and/or ground surveys to bolster the geological controls and understanding on gold mineralisation.

As Ardiden’s technical team continues its evaluation and prioritisation of exploration work programs, the Company is further expected to release drill plans, targets, and results at each of its other Gold Prospects in due course.

Ardiden seems well-positioned to identify additional target areas at Pickle Lake, as its mineralisation models and analysis of controls evolve. The discovery of additional targets is expected to support the exploration efforts at the Pickle Lake project that could potentially be economically viable for the Company.