The RBA’s announcements have surely captured all the attention this week, with investors keeping a close eye on its monetary policy decision and economic outlook for the year 2020. Just three days after keeping the interest rates on hold at 0.75 per cent, the central bank has made public its projections for the year 2020.

Appearing at the House of Representatives Standing Committee on Economics in Canberra, the RBA’s Governor, Mr Philip Lowe released a full set of updated forecasts in his quarterly Statement on the Monetary Policy. The central bank continued to remain optimistic about the nation’s economic outlook, expecting the negative effects of the coronavirus outbreak and bushfires on economic growth to be temporary.

The RBA kept its economic growth forecast for the year-ended December 2020 unchanged at 2.75 per cent, while it downgraded the growth projection for the year ended June 2020 by 0.5 per cent to 2 per cent.

The central bank also lowered its growth forecast for 2019 by 0.25 per cent from 2.25 per cent to 2 per cent, and the bank expects the bushfires and coronavirus to weigh modestly on the last year’s and early 2020 growth.

However, the economic growth is expected to strengthen to around 3 per cent over 2021. 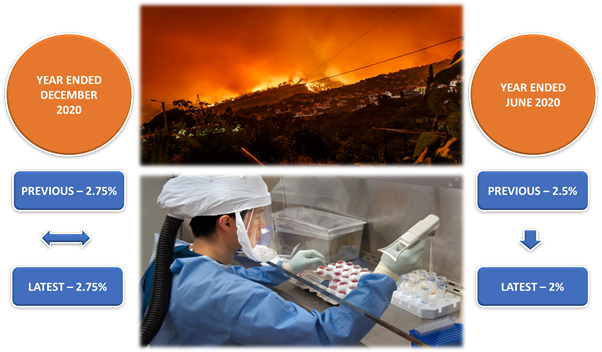 The RBA’s outlook for economic growth was driven by the following expectations:

Impact of Drought and Bushfires Continues to Haunt

As per the central bank, the nation’s economic conditions have been adversely affected by drought and bushfires for over two years, resulting in a fall of 22 per cent in farm GDP since early 2017. The farm GDP is further expected to decline by an additional 7 per cent over the remaining of 2019/2020.

Moreover, the direct effects of the recent bushfires are likely to decrease GDP growth across the December’19 and March’20 quarters by about 0.2 percentage points.

The central bank noted that though the recent air quality concerns and bushfire events have heckled some investment activity in the December and March quarters, once rebuilding efforts get underway, this could be more than offset in subsequent quarters. 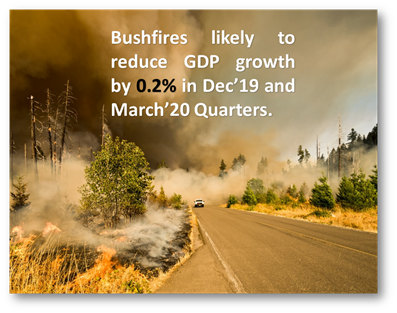 The drought has affected the supermarket food prices, that constitute about 9 per cent of the CPI basket. In response to higher grain prices, the prices of cereals and bread products have also increased over the past year. Besides these products, milk, beef and lamb have also observed strong price increases. The RBA expects the food prices to stay elevated for some time.

Along with drought, the fires are also likely to impact the prices of some goods and services, especially in the affected regions. The bank also expects some transport disruptions in areas affected by fires, that will further boost prices.

The RBA expects a modest increase in underlying inflation, which is likely to rise to about 2 per cent over 2021.

Even if the weather conditions improve in the near term, the bank anticipates the recovery from the drought to be prolonged.

The central bank notified that most of the firms in liaison program anticipate little change in wages growth over 2021, and just a few expect robust wage growth outcomes.

The bank’s lower wage growth forecasts were driven by the superannuation guarantee, which is set to rise from 9.5 per cent to 12 per cent of ordinary time earnings between 2021 and 2025. There is substantial evidence that demonstrates that a rise in superannuation payments result in lower wages growth outcomes to a great extent.

The bank continues to expect some spare capacity in the nation’s labour market for a couple of years. The unemployment rate is projected to fall to about 4.75 per cent in 2021 as GDP growth picks up, remaining in the range of 5 to 5.25 per cent for some time.

Coronavirus to be Worse than SARS

The coronavirus is being considered as a major downside risk to the economic outlook for Australia's key trading partners in Asia by the RBA. The bank believes that there is substantial uncertainty regarding the severity and possible duration of the outbreak, and its effect on the economic activity could be larger than projected.

In fact, the coronavirus outbreak is believed to be worse than Severe Acute Respiratory Syndrome (SARS) outbreak for the Australian economy. The SARS affected several Asian economies and Canada in the June quarter of 2003, posing large economic effects on economies at the epicentre of the crisis.

The outbreak of coronavirus is likely to lower the nation’s GDP growth in the March quarter as a smaller number of tourists and overseas students are anticipated to visit Australia.

The RBA also mentioned that in a worst-case scenario, less Chinese demand for Australian exports of food and bulk commodities in the near term could result in lower commodity prices than the present forecast, which could further weigh on next quarter’s GDP growth. Moreover, the Australian dollar exchange rate is also expected to depreciate in such scenario, offering some offsetting support to the Australian economy.

The central bank is of the opinion that at the present moment, the nation’s economy needs more structural reform, rather than short-term fiscal stimulus.

Amidst the existing economic scenario, the RBA expects the monetary policy to stay accommodative for some time. The central bank does not expect an increase in an interest rate until the inflation is sustainably in between its target range of 2 to 3 per cent.