Is Monetary Policy the only solution to US-China Trade Dispute?

At present, the global economy is experiencing considerable shocks due to the ongoing trade conflict between the United States and China. The effect of these shocks is not limited to one or two countries; rather it is likely to drag down the world economy. This is so because the escalating situation of a trade war has created a lot of uncertainty, and the businesses are revising their investment plans. Many businesses have also decided to wait before taking difficult-to-reverse decisions on capital spending and technology, thereby weakening the global growth. ?In line of this, let us discuss few economic consequences of global trade war:

There are no real winners in this US-China trade dispute as global superpowers indulged in the conflict have become more vulnerable to losses in economic welfare, while the rest of the world including Australia might experience collateral damage.

The first and foremost aspect on which the impact of the trade war is getting visible is the ?world trade?. The US is using trade protectionism as a tool to prevent its country from foreign competition by way of trade tariffs, which is expected to dampen the global growth. When a country adopts protectionist policy, it triggers retaliatory tariffs from other countries, thereby creating cascading effects and hampering global trade.

The impact of trade tariff on the world?s largest manufacturing hub, China is expected to severely affect all those countries that depend on this global supply chain for manufacturing practices, including the United States. The effect has been recently seen in the U.S. manufacturer growth that has declined to its lowest level in August since 2009.

The recently released figures by IHS Markit indicated a fall in U.S. manufacturing PMI to 49.9 in August, below the neutral threshold of 50.0. The trade dispute with the world?s second-largest economy was considered as a major responsible factor for this slowdown.

Owing to global concerns, the International Monetary Fund has recently lowered its forecast of global growth to 3.2 per cent and 3.5 per cent in 2019 and 2020, respectively. The organisation mentioned the prospect of US sanctions is likely to diminish the investment activity and affect global technology supply chains.

How Did It All Started?

Mr Donald Trump?s administration activated the trade conflict with China last year, by imposing tariffs on imports of aluminium, steel and other metals from China. He announced his plans to impose 25 per cent tariff on Chinese goods worth $50 billion. While hitting back, China decided to impose retaliatory tariffs on the US goods worth $50 billion. Mr Trump levied 25 per cent tariff on $34 billion worth of Chinese imports in the first tranche and on $16 billion worth of goods in the second tranche.

Intensifying trade issues, Mr Trump has recently announced its plans to lift the existing tariffs from 25 per cent to 30 per cent on $250 billion worth Chinese goods from 1st October 2019. This was in response to China?s retaliatory tariffs on $75 billion worth of Chinese goods. 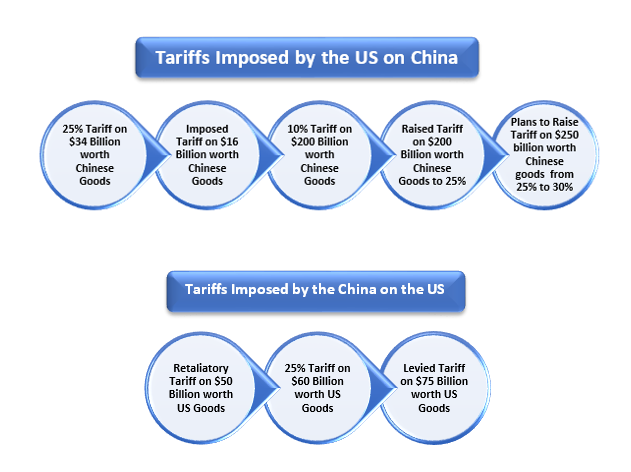 Mr Trump?s administration is imposing continuous trade barriers and tariffs with an objective to force China to make transitions to its existing alleged "unfair trade practices". Also, the US President has been known for promoting domestic manufacturing as he believes that the has been "ripped off" by its trading partners.

News are doing rounds that the US and China will resume trade talks soon, raising some hopes for a stabilisation in global markets.

Now, the question arises that whether the central banks? method of protecting the economy by adopting monetary policy measures will help or not?

The monetary policy constitutes a plan of actions taken by the monetary authority of a country to achieve macroeconomic objectives. The central banks usually use this measure to manage inflation, reduce unemployment and promote economic growth.

At the time when the US economy is facing political shocks, the US Federal Reserve is trying its best to keep the economy out of the ditch. Recently, the Fed lowered the interest rates by 25 basis points for the first time since the global financial crisis in the face of growing economic uncertainties. However, Mr Trump was not satisfied with the 25-basis point cut as he expected a larger reduction in interest rates.

Despite the reduction in interest rates, the U.S. manufacturing PMI lowered in August, signalling that the monetary policy does not prevent the damage entirely.

As stated by the Reserve Bank of Australia?s Governor in his speech at the Jackson Hole Symposium, the monetary policy is just one of the tools available that can possibly manage the economy. But given the challenges faced by the global economy currently, it might not be the best one. RBA?s Governor, Mr Phillip Lowe, mentioned that if all the central banks ease their monetary policy in the face of global uncertainty, the result will not be so effective. This is so because when a central bank eases monetary policy, it usually leads to depreciation of the exchange rate. And when all central banks adopt the expansionary monetary policy, the exchange rate channel gets eliminated, reducing the overall effect on the economy.

Recall that the RBA has lowered the interest rates twice by 25 basis points each in two consecutive months this year in order to stimulate economic growth. The market experts are further expecting a drop-in interest rates amid subdued inflation and the high unemployment rate in Australia.

Monetary policy does lessen the risks of global shocks but is sub-optimal from a welfare perspective. As elaborated by Mr Lowe at the recently held Symposium, there are three other policy levers that can assist in the current shaky global scenario. Let us look at each one of them in the figure below: 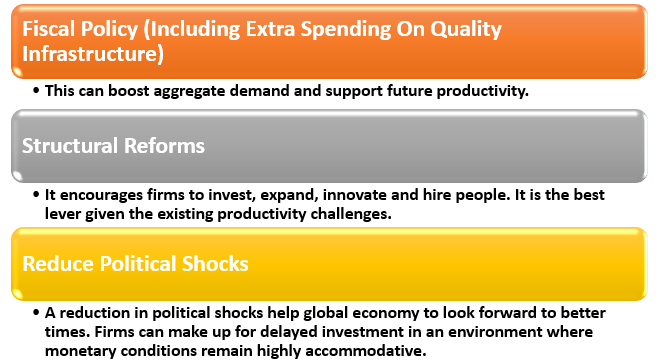 According to Mr Lowe, monetary policy cannot drive long-term growth while other levers can. He believes that relying on monetary policy risks lead to a rise in asset prices in a slackening economy, and a failure to meet the expectations of people undermines the effectiveness of central banks and undercuts their credibility.

It can be inferred that depending on a single policy might not help in the long run, indicating a need for a combination of strategies to sustain the economic growth of a country. It would be interesting to observe how the economies across the world tackle the wobbly situation amid the escalating trade tensions.