People?s Republic of China may be called as the world's workshop, with the product manufacturing and assembling units of several companies around the globe located within its premises. Chinese economy has grown apace over the past decade, underpinned by rapid urbanisation, industrialisation and increasing openness to foreign trade, and the country is already an emerging success with plenty of room for growth before it joins the league of developed economies.

Australia, on the other hand, is an advanced economy with demonstrated economic resilience, adaptability and record of 27 years of annual economic growth (uninterrupted), thus presenting a safe, low-risk environment for other countries to do business. Besides, the Australian economy is characterised by strong institutions and thriving services sector.

Australia?s largest trading partner is China and the country has long enjoyed the benefits of China?s economic progress while also treating its expanding presence in the region with caution. China?s development has been extensively driven by the resources industry which explains why Australia's exports to China have progressively expanded over the last few years with the key bulk commodities being iron ore and coking coal. As a result, China is a major destination for around one-third of Australian exports, as well as accounts for nearly one-fifth of foreign imports entering Australia.

According to the Australian Bureau of Statistics, China, over the years has surpassed Japan as the largest exports partner for Australian goods, and it has also overtaken the United States to become Australia's second-largest source of imports. 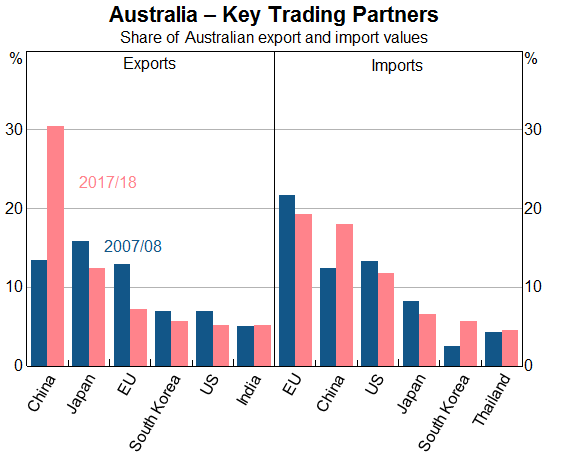 Recently, China?s sprawling capital Beijing disclosed that the country?s annual rate of expansion had slowed from 6.4% to 6.2% in the second quarter of 2019. Although the GDP growth figure was within the government?s target range of 6.0%-6.5% for the year, it is still below the 6.6% growth recorded by China in 2018. The slowdown in China may be partly attributed to the escalated trade tensions with the United States and rising tariffs being imposed by the Trump Administration. Given the strong links between the two economies, China and Australia, the risk of a weakening economic landscape in the former could have repercussions for the latter.

The pace and composition of China?s growth has been evolving, as the country shifted to a more on consumption-based growth than the one driven by investment. Besides, the country is also undergoing rapid urbanisation, ageing and witnessing dynamic technological changes. Thus, it is expected to provide businesses across the world with a gigantic yet challenging, consumer market.

While this shift is expected to weigh heavily on the commodity exports from Australia to China. Even so, resources exports from Australia would continue to play as a key link with China, on account of rising exports of both coking and thermal coal, as iron ore export volumes have been on a decline in recent years. Also, the higher quality coking coal offered by Australia cannot be mined domestically in China.

Regardless, the changing pattern of Chinese demand is creating new opportunities for Australian exporters such as in the services sector, especially education and tourism, the largest two categories of service exports to China. Also, manufactured food exports from Australia, including dairy products and food supplements have expanded, on account of a rapid increase in demand from China's growing legion of middle-class consumers.

In fact, since early 2010, China has gradually turned into one of the key services export destinations for Australia. Other prominent export categories to China include alcoholic beverages, such as wine.

Now, given that China consumes nearly half of the world?s steel and is the largest consumer of raw materials like iron ore and coking coal, any slowdown in China is anticipated to trigger a drop in the commodity prices, globally, which would obviously have ramifications for Australia?s terms of trade.

Moreover, China is also one of the largest importers of oil. Thus, any slump in the Chinese economy is likely to weigh heavily on oil prices. Besides, Australia over time, has turned into a net exporter from a net importer of liquefied natural gas (LNG) in the past couple of years. Any dwindling of oil prices globally is likely to impact its terms of trade.

Although, the economies of China and Australia are minimally linked on the financial front, yet China is a prominent emerging economy globally with a strong market presence. Thus, any slowdown in China would most definitely impact the global business confidence and financial markets, specifically the equity markets, which would in turn have spill over effects for Australia to deal with.

A deterioration in the health of the economy of China could promote increased uncertainty, higher financial market volatility, and a reassessment of global growth prospects by various countries along with repricing of risk in the financial markets, which could further lead to change in the pricing of securities like equities.

Whatever transpires on the global front, Australia still has one big advantage of having dealt with China for a decade or so, as a major trading and investment partner. Thus, the country can use the knowledge and understanding to develop strategies to cope with any surprising condition if it may arise within China?s economy and balance different interests.

During 2018-19, there has been an evident decline in Australia?s economic growth amidst housing prices spiralling downward and occurrence of a severe drought. However, according to market analysts, the economic growth in Australia is expected to recover as the government and central bank injects certain monetary and fiscal stimuli, in order to boost the household income and consumer spending.

Having said that, the International Monetary Fund (IMF) assumes that the Chinese economy would grow by around 6.2% in 2019 and 6.0% in 2020 (World Economic Outlook, July 2019). In addition, China is experiencing rapid urbanisation which could be as much as 70% by 2027, with 22% of the population in China living over 60 and the young adults of 2027 expected to be more demanding and digitally enabled than their predecessors, according to a report from the World Economic Forum and Bain & Company in 2018. Overall, all these developments are expected to create a mass consumer economy presenting a great opportunity for existing trading partners to capitalise upon.