Global Scenario still on the Doldrums; US’ tiff with Iran and China

The dust doesn?t seem to settle on the global front as President Donald Trump forewarns Iran of the ?threats that could come to bite the nation? after the capital city Tehran declared its decision to breach the 2015 nuclear deal signed during the era of Barack Obama. The development has transpired amidst the ongoing heated trade tensions between the United States and China.

Recently, Iranian President Hassan Rouhani informed the world that the country had stockpiled excess (more than 300 kilograms) low-enriched uranium than sanctioned under its 2015 deal agreed upon with major global powers. Subsequently, he has also added that Iran would further enrich uranium above the purity level of 3.67 per cent, the maximum sanctioned under the nuclear deal and a level that is considered optimum for commercial generation of electricity.

The consecutive announcements by Iran, that undermine the nuclear accord, in a single week has ignited concerns and another debate amongst the signatories of the deal. While European nations are worried about Tehran?s warnings, Israel informed that it was preparing for a possible military confrontation between Iran and the United States. The International Atomic Energy Agency (IAEA), based in Vienna, Austria and promoting cooperation in the nuclear field worldwide, also confirmed that Tehran had breached the limit.

President Hassan Rouhani added that the country would set the level of enrichment as per their necessity and need while no longer staying committed to nuclear accord limit until a new Nuclear Deal was signed. The existing Iran nuclear deal, more formally known as the Joint Comprehensive Plan of Action (JCPOA) has been under pressure since Trump had re-imposed tough sanctions (barred all international sales of Iranian oil) on Iran after the United States pulled out of it more than a year ago in May 2018.

The experts believe that there are no clear indications that Iran was heading towards developing nuclear weapons and President Rouhani is only demanding that the European countries (Britain, France, Germany, Russia) and China should abide by the commitments that they promised and protect trade with Iran that has been blocked by the United States.

Adding to the disturbance, Tehran has also warned the fellow signatories that it is planning to revive its Arak heavy-water reactor after 7 July 2019 if they do not abide by the JCPOA code.

According to the Iranian Foreign Minister, Mohammad Javad Zarif, Tehran was only exercising its legitimate right to respond to the US President Trump terminating participation in the JCPOA. While other global stakeholders believe that such a move would further escalate instability in the Middle East.

Under the governance of the US? President Barack Obama, the JCPOA was sealed in July 2015 and offered billions of dollars in sanctions relief to Tehran in lieu of Iran restraining its nuclear program. The deal lifted sanctions on Iran imposed by the United Nations, the United States and the European Union that covered areas including technology, trade, finance and energy. As per JCPOA, Iran not only obtained access to $100 billion worth of assets abroad, but the deal also enabled the country to recommence its oil sales in the global markets and utilise the global financial system for trade purpose.

The Obama administration expressed confidence in the JCPOA that removed the key elements that Iran would indispensably require to develop a bomb and increased its break-out time to one year or more.

Iran had also agreed to refrain from any activities including R&D, which could contribute to the proliferation of nuclear weapons.

JCPOA was signed by the five permanent members of the UN Security Council ?Russia, the United States, France, China and the United Kingdom, along with Germany and the European Union.

Though Iran agreed to allow extraordinary and robust monitoring, verification, and inspection by IAEA, the US has been critical of the pact ever since. 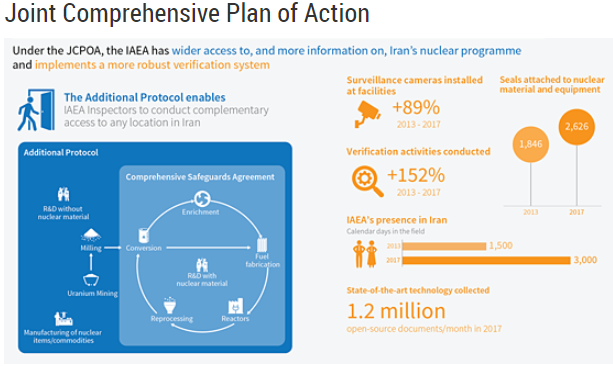 Thus, President Trump withdrew from the deal and called it fatally flawed on various grounds. He also added that it was unsuccessful to ensure the security of the American population from the danger formed by the leaders of the Islamic Republic of Iran.

The United States and the People's Republic of China embarked upon a trade battle last year and have been locked in the same since the US President Donald Trump imposed a 25% border tariff on $34 billion worth of Chinese goods including steel, aerospace and machinery in July 2018. Trump had been suspicious of certain Chinese trading practices since he took the office in 2016 and launched an investigation into the same in 2017.

As a retaliatory comeback action, Beijing also slapped a 25% tariff on the goods entering its borders from the United States including automobiles and soybeans, all worth around $ 34 billion. A truce agreed between the two superpowers in December 2018 also crumbled following which the US raised tariffs on ~$ 200 billion worth of Chinese products in May 2019. Again, China hit back with a tariff of $ 60 billion on the US goods.

The whole dynamics turned into a game of chicken, but President Trump soon realised that its ongoing tiff with China and the escalated trade battle had raised economic woes for the United States too.

Recently, the US President Trump met with the Chinese President Xi Jingping at the G-20 summit in Osaka, Japan and subsequently announced the revival of the trade talks between the two nations that were suspended in May 2019. Trump has also agreed to further tariffs on Chinese goods for an indefinite period and also promised to enable the US companies to sell technology and components to Huawei, a Chinese multinational technology company based in Guangdong.

Although the International Monetary Fund (IMF), does not perceive the US-China trade tensions as a harbinger of the global recession, yet it has added that the current and threatened US-China tariffs could decrease the 2020 global gross domestic product by 0.5 per cent, or approximately by $ 455 billion. This has influenced the market confidence worldwide and could potentially slow down global growth that is anticipated to improve next year.