With substantial growth in population, technological advancements and other major developments, the global economy has considerably grown over the years. However, the world economy is currently facing some major risks emerging from the US-China trade dispute. In line with this, the International Monetary Fund in its latest ?World Economic Outlook? has projected the global economy to grow at 3.2 per cent in 2019 and 3.5 per cent in 2020.

As per the IMF 2019 estimates, the following countries are likely to hold first-five positions as per their GDP numbers: 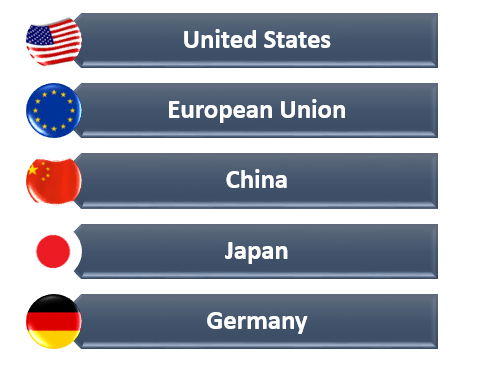 Let us talk about the recent developments in these five major economies in some detail below:

The United States is one of the most advanced economies, which was ranked seventh by the IMF on per capita GDP (nominal) basis in 2017. The US possesses world-leading industrial sector, the world's foremost reserve currency, advanced technologies, abundant natural resources, the world's largest financial market and much more.

Counted amongst the strong economies of the world, it is also considered as a second-largest trading nation across the globe. Although the country holds a strong position in foreign trade, it has been engaged in a trade dispute with China for the past several months. The United States President, Mr Donald Trump, has been imposing tariffs on the Chinese goods with an aim to induce China to change its trade practices. In a major development, recently both the countries have agreed to meet in Washington next month in an effort to resolve trade conflict. ?Amid this ongoing trade conflict between the two countries, the US Manufacturing PMI dropped to 49.1 in August, the lowest such level recorded since 2016.

Recently, the US Federal Reserve reduced the interest rates by 25 basis points, which was the first cut observed by the country since 2008. According to IMF, the US economy is expected to witness a growth of 2.6 per cent in 2019, moderating to 1.9 per cent in 2020 with a slowdown in fiscal stimulus.

The United Kingdom is planning to leave the European Union on 31st October 2019 this year. Recently, there has been some recent development on the Brexit (Britain?s Exit from EU) issue, with opposition MPs backing a bill to obstruct a no-deal Brexit. The bill could postpone the Brexit until next year if Europe and the US won?t enter into a deal by next month.

China was ranked as the world?s largest economy by the IMF in 2018 based on purchasing power parity. The country holds a large proportion of the world?s total natural resources, primarily coal and rare earth metals. It is also considered as the largest exporter and manufacturing economy of the world, that contains the fastest-growing consumer market. China plays a prominent role in international trade and conducts trade with South Korea, the USA, Australia, Malaysia, Japan, EU, Taiwan, Hong Kong and several others.

China has also been in the news due to its intensifying trade tensions with the US. China?s Commerce Ministry has recently informed about the next round of trade negotiations between the US and China in Washington next month. The country has so far given a tit-for-tat answer to Mr Trump over the imposition of trade tariffs.

Despite the ongoing dispute with the US, China?s Manufacturing PMI improved in August to 50.4 exceeding the experts? forecasts of 49.8.

Counted amongst the most developed countries of the world, Japan has the largest electronics goods industry. The country majorly exports steel products, automobiles and parts and semiconductors. Japan is trying to reduce its imports of liquified natural gas and oil from foreign counterparts, by increasing its use of renewable energy. Rated amongst the most innovative countries across the world, Japan primarily focuses on the manufacturing of high-tech and precision goods.

The negative effect of the US-China trade war has spread to Japan, suggests recently released Japan Manufacturing PMI data. The country?s PMI dropped to 49.3 in August from 49.4 in July, reflecting difficult conditions faced by the Japanese goods producers during the month.

Germany recorded its seven-year low manufacturing PMI in August this year as the production of goods was scaled back, and the new orders continued to fall sharply. The lower demand for capital and intermediate goods, and reduced demand from the car industry pushed the index down during the month.

It can be inferred that though these countries have a strong economic base, the impact of the ongoing trade tensions is visible on their individual economies as well. It would be interesting to watch whether these countries would be holding positions as per the IMF?s projections or not in 2019.