The mounting tensions between US and China impacted the global market, as seen in the market performance. House Speaker Nancy Pelosi's arrival to Taiwan despite warnings from Beijing has added to geopolitical turmoil.

The geopolitical tensions due to Moscow's invasion of Kyiv and Western sanctions on Russia have already dragged down the market this year.

China was also in the headline for quite some time due to its pandemic-led lockdowns as they have already disrupted the global supply chain.

In addition, the second quarter earnings season has also fuelled traction of the stocks. Several defense firms have already posted their quarterly earnings, indicating how they have performed amid the choppy first half performance of the broader market.

Let's take a closer look at the stocks and evaluate their recent performances amid rising geopolitical turmoil.

The aerospace and defense conglomerate firm had a dividend yield of 2.36 per cent, while its annualized dividend was US$ 2.20. The dividend yield is the annual dividend received from an investment divided by the current share price of the asset.

The US$ 137.98 billion market cap firm has been recently in the limelight following its second-quarter earnings release. It posted a three per cent year-over-year (YoY) growth in its Q2 FY22 revenue of US$ 16.3 billion. Its net income rose a quarter per cent to US$ 1.30 billion in the second quarter of fiscal 2022, from US$ 1.04 billion in the year-ago quarter.

RTX stock showed gains of nearly eight per cent this year while soaring about five per cent in one year.

Stock of another major aerospace and defense firm, General Dynamics, gained about eight per cent year-to-date (YTD) while showing gains of nearly 13 per cent in the past 12 months. In the current quarter, it ticked up over one per cent.

General Dynamics had been awarded a contract of about US$ 698 million from the US Navy for repairing, maintenance, and modernization of the submarine USS Hartford, the company said on July 29.

On July 20, it received a US Navy contract of about US$ 273 million for supporting the development, production, and installation of fire control solutions for ballistic missile submarines.

Northrop Grumman focuses on offering solutions for space, aeronautics, defense, and other related fields. The firm holds a market cap of over US$ 73.67 billion.

NOC had a dividend yield of 1.45 per cent, while its annualized dividend stands at US$ 6.92. NOC stock returned gains of over 22 per cent this year, and on a YoY basis, it surged 30 per cent. 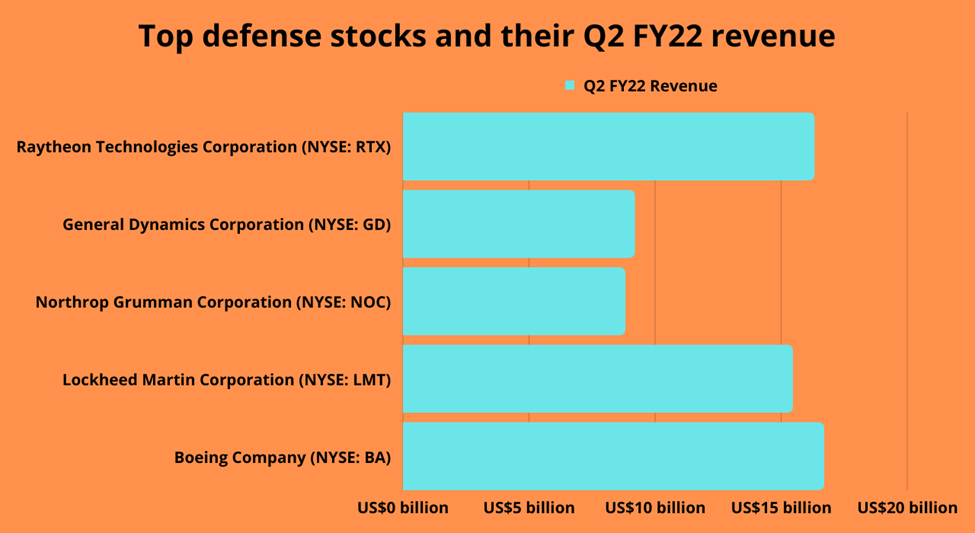 Lockheed Martin specializes in aerospace, arms, defense, information security, and other related services. Its dividend yield was 2.67 per cent, and its annualized dividend was US$ 11.20.

LMT stock returned gains of nearly 19 per cent YTD while increasing over 14 per cent in the last 12 months. However, on a quarter-to-date (QTD) basis, it fell by nearly two per cent.

BA stock lost about 18 per cent this year amid several challenges in the broader market while declining about 28 per cent in one year. However, it rose by about 20 per cent in the ongoing quarter.

The Arlington, Virginia-based firm recently came into the news after it reportedly got preliminary clearance from the US regulators from the aviation department (Federal Aviation Administration) for restarting deliveries of its 787 Dreamliners.