Why Mullen (MULN) stock soared over 35% on Tuesday?

The Mullen Automotive, Inc. (NASDAQ: MULN) stock jumped 35.64% to US$1.3106 at 10:40 am ET on Tuesday after announcing impressive test results from its polymer solid-state battery. The batteries are used in EVs, wearables devices, pacemakers, etc.

The results are in line with the previous results from EV Grid, which produces batteries and battery management systems for vehicles. In EV Grid’s testing, the battery cell was rated at 300 Ah at 3.7 volts, with the battery yielding 343 Ah at 4.3 volts.

Mullen said the battery cell would continue to be tested to understand its overall capabilities and performance, said Ben Wrightsman, president and CEO of Battery Innovation Center.

The CEO and chairman of Mullen Automotive, David Michery, said, “The battery has performed exceptionally well, and I’m pleased with the results from BIC in Indiana.” 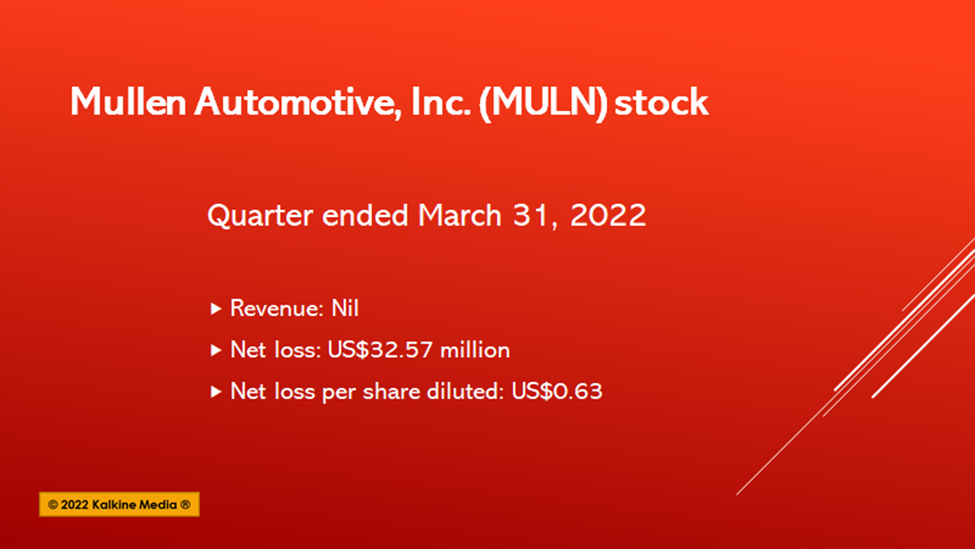 Brea, California-based Mullen Automotive is an emerging electric vehicle company specializing in manufacturing EVs and energy solutions. It aims to create an end-to-end ecosystem where electric vehicles are more accessible to everybody.

In early May, it announced a US test-drive tour from Southern California in October 2022, covering 19 US cities in over six weeks. The tour may get extended to spring 2023.

The company has not begun commercial production and has not earned any revenue in the quarter ended March 31, 2022. It expects to earn significant income from direct sales of its SUVs and flexible EV leases once the production and commercialization start.

Its net loss came in at US$32.57 million for the March quarter of 2022, compared to the net loss of US$9.3 million in the same quarter the previous year.

Analysts expect a 150-kilowatt hour solid-state fully-charged battery can deliver up to a 600-mile range for Mullen’s compact SUV. Hence, they say the test results will positively impact the market.