Why Was NYSE Created?

The New York Stock Exchange or NYSE is the world's largest stock market based on market capitalization. The combined wealth of some 3,100 NYSE-listed companies is about US$25 trillion, and their average daily trading volume ranges between 2 and 6 billion shares.

NYSE was established in New York on May 17, 1792. It is believed that 24 stockbrokers had formally launched the exchange after they signed the Buttonwood Agreement in the same year.

A centralized exchange was required to meet the growing needs of the US securities market at the time. Commodities like wheat and tobacco were initially the main auction items, but the exchange also focused on government bonds.

It was initially headquartered at the Tontine Coffee House. On March 8, 1817, the organization was officially named the New York Stock and Exchange Board. By the early 1800s, the board expanded beyond government bonds and bank stocks.

The progress in telecommunication brought ease to the trading process. It became more exclusive as its membership grew. During the civil war, securities, commodities, and gold were discovered in California, and they began trading on the exchange. In 1865, it shifted its headquarters to 11 Wall Street, and it remains its main office to date.

Investors and brokers could communicate directly after the installation of phones in 1878. After that, however, the exchange faced major struggles till the end of World War I.

On October 23, 1929, the stock market crash caused an 89% drop in share prices, leading to strict government rules, including its registration with the US Securities and Exchange Commission. Furthermore, in 2013, the Intercontinental Exchange acquired NYSE.

Also Read: What Are The Three Biggest Stock Exchanges In The US 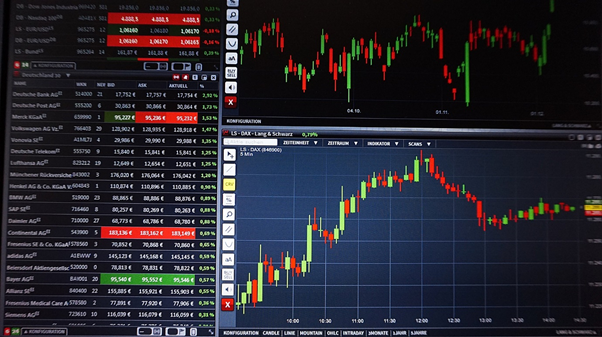 How Does the NYSE Work?

Transactions are done either electronically or through the brokers directly on the floor. Thus, it is also called a hybrid market. The brokers can be brokerage company or institutional investors such as pension funds.

Brokers or market makers, which are issued a trading license, set the bid price for buyers. Sellers submit the asking price, which is usually higher than the bid price. However, a sell order is incomplete until the dealer finds a broker who would buy the specific stock.

Dealers are also called matchmakers that connect buyers and sellers, which are also brokers. The dealer earns a commission after the deal is executed.

Stocks of a particular company become available for public trading when it lists the shares at the exchange.

Companies raise funds through public offerings. Many investors are not members of the NYSE, but they can still invest in stocks. Dealers execute the orders as per their instructions. Firms must meet the conditions of the SEC and NYSE to sell stocks.

Also Read: Where Can I Find Stock Prices?

How NYSE Influences the Economy

NYSE manages enormous volumes of financial transactions daily. Since the rise and fall in share prices determine income, market fluctuations can alter people's spending habits, affecting the economy. For example, when a person earns more, he or she may spend more. It is also called the wealth effect. Thus, exchanges can help inject money into the economy.

In 2015, the trading volume on NYSE was around US$18 trillion, which was almost equal to then US GDP and about 20% of the world's GDP, as per the World Bank.

Why Companies Consider Listing on NYSE?

NYSE operates based on a low-price volatility model. It combines dealers’ expertise with technology for running the trading process smoothly. It is a marketplace where corporate giants raise capital to invest in their future growth and the economy.

NYSE helped companies to raise critical funds across various sectors. It also collaborates with the media to reach out to millions of potential investors around the world daily.

Also Read: Can Companies List Both On NYSE And NASDAQ?