Analysts believe the biotechnology company’s lower share value may be drawing investors’ attention to the stock. On the other hand, the EV maker has been in the limelight after its Nasdaq debut on July 26 following a SPAC deal with Churchill Capital Corp IV.

GBS had raised US$21.6 million from its Initial Public Offering (IPO) in December 2020.

Here we explore some of the key financial stats of the two companies.

Also Read: Five gaming stocks to keep an eye on as industry continues to expand

Also Read: Clearwater Analytics files for IPO: What you need to know 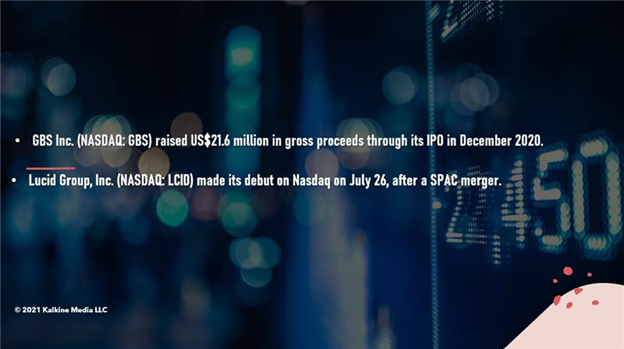 This electric vehicle maker is based in California. The stock witnessed several ups and downs in recent times. However, it has been in the limelight since its Nasdaq debut on July 26.

The auto company executed a SPAC merger with Churchill Capital Corp IV on July 23. Lucid’s PIPE investors were blocked from selling shares till September 1 due to the lock-up period.

Lucid reported a basic EPS loss of US$2.28 per share, excluding extraordinary items, compared to a loss of US$3.33 per share in the June quarter of 2020.

The company plans to showcase its products to the public at its Casa Grande plant in Arizona on September 27.

While GBS Inc’s innovations are helping attract new customers, the EV market boom is helping Lucid gain a foothold in the market. Analysts expect the sectors to grow rapidly in the coming years as both the segments are receiving major government budgetary support as part of its rebuilding plan for the economy.