Let's look at the recent developments and the performance of the stocks.

Grom Social Enterprises is a media, technology, and entertainment company based in Boca Raton, Florida. It provides a parents-monitored content platform for 13-year-old children.

has recently acquired Curiosity Ink Media, which is working on a theatrical project called "The Pirate Princess", an original intellectual franchise for global theatrical distribution.

It also said on Wednesday that Curiosity Ink would launch the show in the second half of 2022.

Meanwhile, on Thursday, Grom said that its wholly-owned subsidiary Top Draw Animation would infuse about US$1 million in new projects through its studio in the Philippines.

The company's sales were US$1.38 million for the three months ended June 30, compared to US$1.74 million in the same period of the previous year. It reported a net loss of US$2.50 million, against a loss of US$0.95 million in the year-ago period. 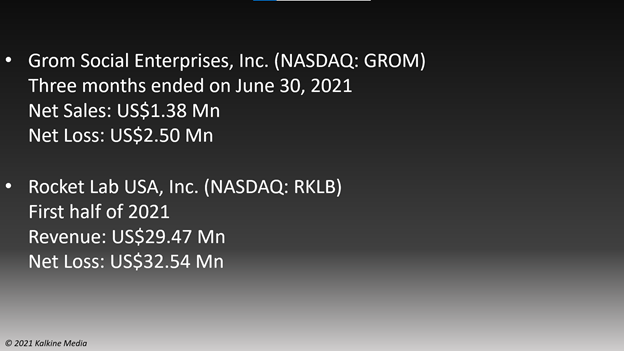 Rocket Lab USA is an aerospace and defense company based in Long Beach, California. It manufactures small and medium-sized rockets and components for the aerospace sector.

The Rocket Lab stock has been in focus after it bagged a contract from NASA for a technology demonstration next year. Rocket Lab will provide an electron vehicle to NASA for sending its Advanced Composite Solar Sail System, or ACS3, into orbit next year.

Also Read: Cheap EV stocks to explore in the fourth quarter of 2021

Both the stocks saw steady growth in recent months. The GROM stock surged 161.12 percent YTD, while RKLB grew 35.92 percent YTD, reflecting their strong growth. However, investors should evaluate the companies carefully before investing in stocks.