3 US stocks to watch as Fed hikes rate: BA, KHC, and BMY

The Boeing Company (NYSE: BA), The Kraft Heinz Company (NASDAQ: KHC), and Bristol-Myers Squibb Company (NYSE: BMY) are one of the top companies in their respective sectors. As the earnings season is taking its pace, the investors are keeping a close watch on the corporate results amid high inflation, rate hikes, and geopolitical turmoil.

The Federal Reserve announced a 0.75 per cent hike on July 27 and some investors anticipate that the Fed's further aggressive stance could push the economy into a recession.

Among the closely followed earnings, these three seem to have caught investors’ attention. Let's take a closer look at their financial performance in the latest quarter. 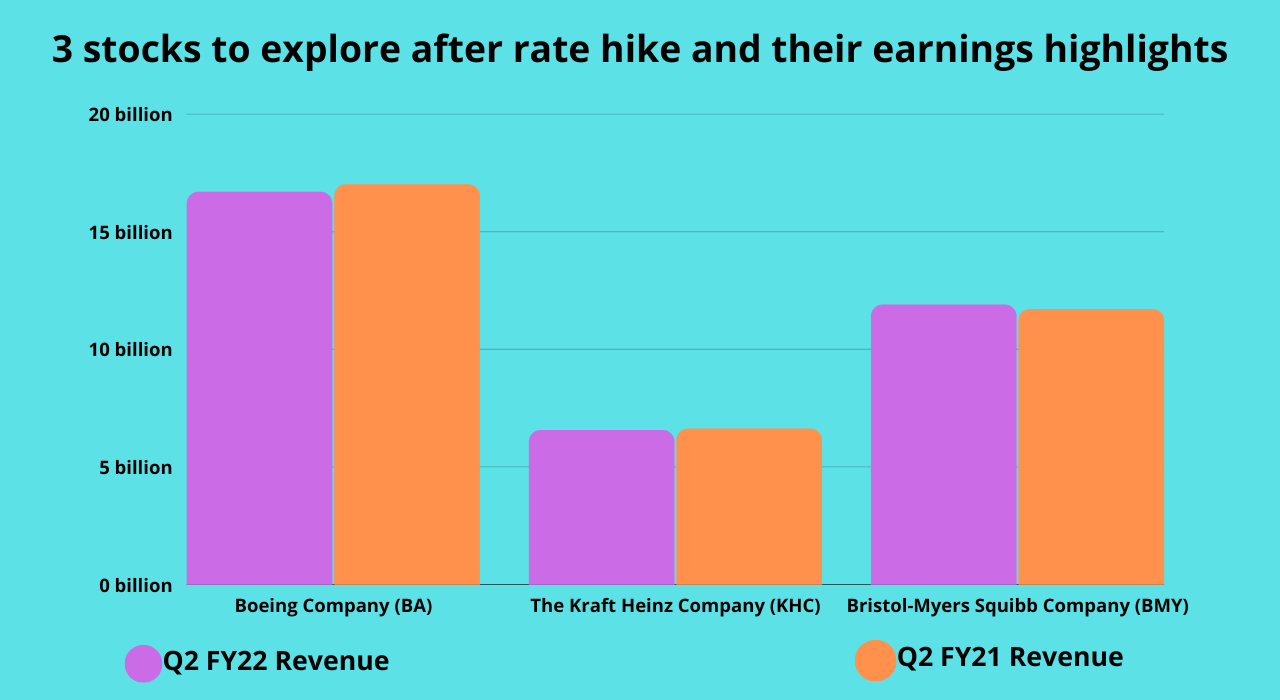 The BA stock closed at US$ 156.09 after rising 0.11 per cent during the trading session, following its earnings release. Its earnings update said it would stick to its outlook to return to free cash flow this year. In addition, it is preparing to recommence the delivery of 787 Dreamliner planes, following a pause of around two years due to manufacturing issues.

The aerospace manufacturer's operating cash flow was US$ 0.1 billion in the fiscal 2022 second quarter. Its revenue dropped two per cent year-over-year (YoY) to US$ 16.68 billion in Q2 FY22.

The KHC stock fell about six per cent on Wednesday, despite the food company raising its annual organic sales guidance.

Several food companies have raised prices due to the global supply chain woes and rising costs. However, some anticipate that higher costs may weigh on consumer demand.

The pharmaceutical firm Bristol-Myers reported its earnings on July 27. It said that the sales of its cancer drug didn't fall as much as anticipated despite strong competition from generic drugs.

However, the firm slightly trimmed its annual sales guidance to US$ 46 billion, citing the strong dollar's effect on its sales.

The earnings from big companies, key economic data, and Fed's comments make it one of the busiest weeks for investors. All the key events are likely to set the stage for the market's future performance.

Fed’s decision of rate hike again marked their effort to cool down the inflation at their target of two per cent.

Investors should tread cautiously as the volatility in the market persists.