When is Vietnam's EV maker VinFast launching its US IPO?

Vietnamese electric vehicle maker VinFast on Thursday confidentially filed for an initial public offering (IPO) in the US. The company is building a factory in North Carolina, US.

Its Singapore-based holding company plans to spend US$4 billion on construction. Last month, President Joe Biden had said VinFast’s investment would create more than 7,000 jobs. The factory, part of its larger US manufacturing complex, could become operational in 2024.

In January last year, the company rolled out its first self-driving sports utility vehicle. It said the vehicles were at par with other EVs like Tesla cars in the market but a lot cheaper. The company plans to launch them in the European and the US markets in 2022.

VinFast, part of Vietnam’s biggest conglomerate Vingroup JSC, has not disclosed the IPO size or the price range. But observers said it would use the IPO proceeds for US expansion. VinFast is looking to raise about US$2 billion from the IPO, sources told Reuters.

Also Read: Westrock Coffee SPAC: When is the coffee company going public in US? 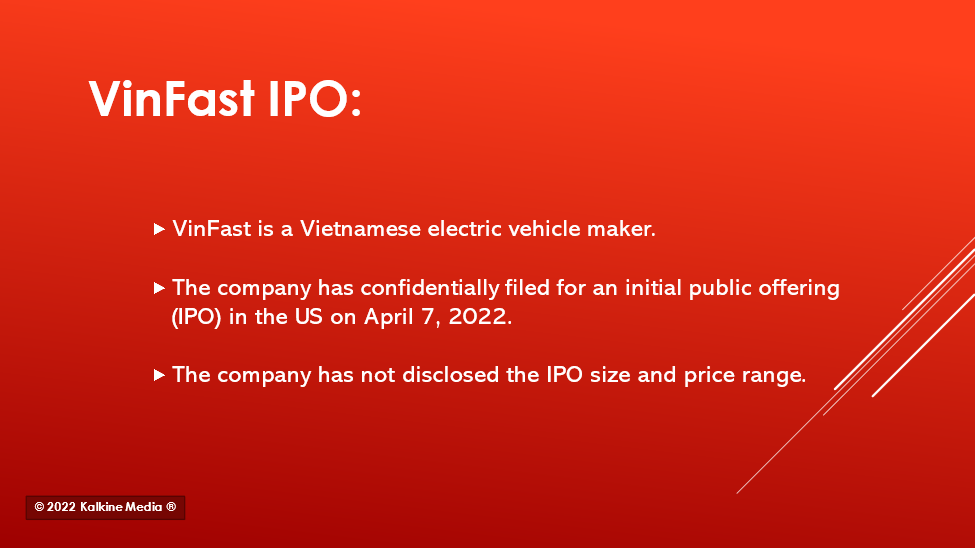 Last week, the company said it had signed a deal to spend US$2 billion to build the North Carolina factory to manufacture electric buses, sports utility vehicles, and batteries.

It targets to sell around 42,000 electric vehicles in 2022. The company intends to start delivering cars in late 2022 in the US, Canada, Germany, France, and the Netherlands.

Also Read: Is Pensando a public company? Know details ahead of AMD acquisition

Around 80 IPOs were priced in the US in the first quarter of 2022. Many companies have delayed their IPOs due to adverse market conditions this year. VinFast might launch the IPO in the second half of 2022, subject to regulatory approval. Separately, it is exploring ways to raise US$500 million to US$1 billion ahead of the IPO through funding rounds, Bloomberg reported.