The company is exploring a potential listing of Aramco Trading Co. It could be one of the biggest IPOs this year. Saudi Aramco is working with Goldman Sachs Group Inc., JPMorgan Chase & Co., and Morgan Stanley for its offering, the sources told Bloomberg.

The Aramco Trading Co. could be valued at tens of billions of dollars after the IPO.

The company may sell up to 30% of its stake in the division. However, it is still considering the plan. The size of the IPO and the timing of the listing are also not immediately known.

As uncertainties hit the global energy market due to the Ukraine war, Middle East energy firms are weighing possible stock listings to attract foreign investors in a bid to re-energize the sector.

Bloomberg reported that Aramco was considering listing its refining arm Luberef in April. 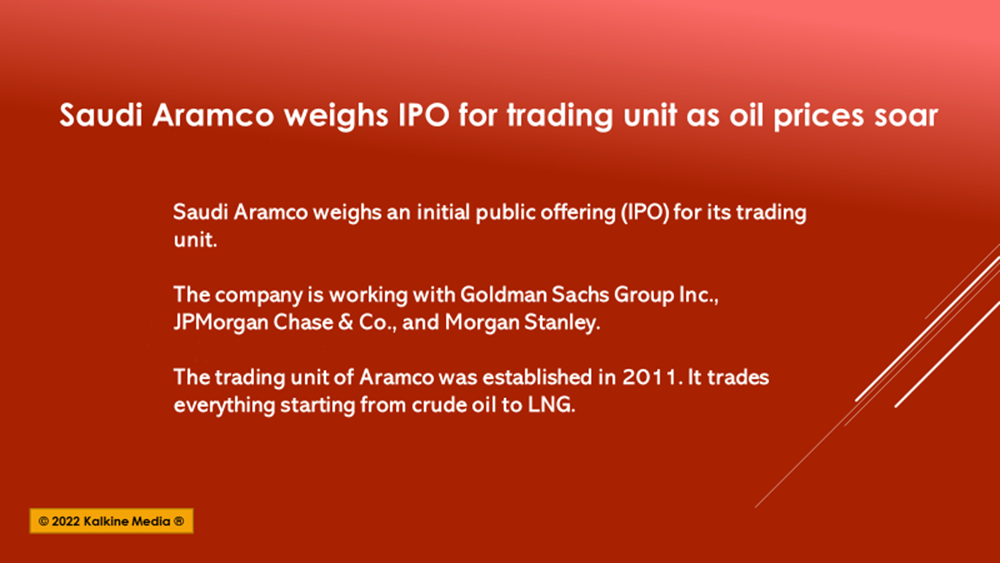 Also Read: NVDA to AMD: Will these 5 semiconductor stocks ride out supply crunch?

Aramco’s trading unit for crude oil, LNG, and other related products was established in 2011.

With the soaring oil prices, oil companies see the Middle East region as a bright spot for IPOs. However, IPOs haven’t been very successful this year compared to last year in most economies.

The Middle East market has been relatively less volatile, and it may have been one of the key factors drawing the attention of global investors.

Aramco was listed on the Saudi stock exchange in 2019. On May 15, it reported its highest profit since its stock market listing, driven by the skyrocketing oil prices. Its net income rose more than 80% in the first quarter of 2022 to US$39.5 billion.

Last week, Saudi Aramco became the world’s most valuable company after it surpassed the tech giant Apple Inc’s market capitalization to US$2.4 trillion. With the constant increase in oil prices this year, Saudi Arabia saw its fastest economic growth in a decade.