Both the IPOs were in focus on Wednesday after their higher-than-expected share prices. The following are some key details of the public offerings.

Dutch Bros is an Oregon-based beverage maker. On Tuesday, it announced its IPO share price at US$23, higher than the expected price range of US$18.00 to US$20.00 apiece set earlier.

The stock with the ticker symbol BROS began trading on NYSE Wednesday.

Dutch Bros is an operator and franchisor of drive-through shops that offer beverages like coffee, lemonade, shakes, energy drinks, etc. It claims to provide fast and superior services.

In 2021, it launched the Dutch Reward program through its new app, garnering around 2.3 million-member activations as of June 30, 2021, only behind DoorDash, and McDonald’s. 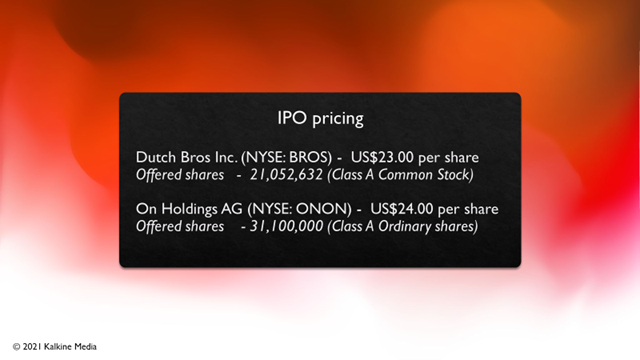 It is offering 31,100,000 class A Ordinary shares in the IPO. An additional 4,665,000 Class A ordinary shares are available for optional purchase within 30 days for the underwriters.

The company expects to raise around US$746.4 million at the offering price. The offering will close on September 17.

On holdings AG, founded in 2010, is a shoemaker focused on running shoes. It became famous after tennis superstar and 20 times Grand Slam winner Roger Federer invested in the company last year.

The company is set to trade on NYSE with the ticker symbol ONON. Its representative underwriters include Goldman Sachs and Co., Morgan Stanley, and J.P. Morgan.

These two newcomers on NYSE have gathered huge traction and rightly so for their unique products and services. Many IPOs were launched on Tuesday, and many others will follow suit this month. However, investors must evaluate them carefully before investing.