Many technology firms use AI to make their business operations more robust through high-profile applications, including robotic process automation, robotics, and virtual assistants. Some companies also gain from AI through the sales of software, hardware, services, and expertise required for the proper functioning of the technology. Its plethora of applications across a number of sectors is further boosting investor interest in the technology. The rise in the number of publicly-listed AI firms underlines the growing trend and rising investor interest in the field. 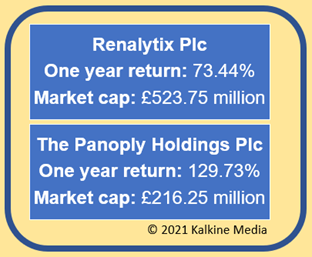 Renalytix is an artificial intelligence-powered provider of in vitro diagnostics. The company is focused on optimising clinical management of kidney disorders and driving improved patient outcomes. Recently, Renalytix and the US-based Mount Sinai Health System announced the scale-up implementation of the former’s KidneyIntelX platform across primary health care and specialty clinic networks for patients suffering from diabetic kidney disease (DKD).

Renalytix’s shares returned 73.44% in the last one year to shareholders, and the market cap stood at £523.75 million.

The Panoply Holdings is a digitally native technology and consulting services provider. It is engaged in offering robotics, automation, chatbots and artificial intelligence (AI) solutions. During the first five months of trading in H1 2022, The Panoply Holdings secured new contracts worth £50 million compared to £18 million in the same period in the previous year, representing a 177% year-on-year increase in order intake. Its new contracts encompass £10 million worth of contract wins from the utility sector.

The Panoply Holdings revenues rose by 62% year-on-year to £51.1 million for the year ended 31 March 2021 compared to £31.5 million in the previous year. In July 2021, it acquired Nudge Digital Limited, a digital services provider to the pharma and health sectors.

The Panoply Holdings announced a final dividend of 0.4 pence per share for the year ended 31 March 2021.