The National Cyber Security Centre (NCSC) reported a 7.5% rise in the number of cyberattacks in the UK in the year to August, primarily triggered by ransomware attacks originating from Russia. The rise in cyberattacks is fuelled by the increase in the number of criminal hackers obtaining control of corporate data and demanding a ransom payment in the form of cryptocurrency.

Criminal hackers have been successful in aiming organisations in the UK such as the London Borough of Hackney and the luxury jeweller Graff. Fixing the damage caused by such attacks can take months. The rebuilding of Hackney’s affected systems cost around £10 million. In October, NCSC’s parent organisation revealed that the ransomware attacks in last one year on UK-based institutions has doubled. The impact of ransomware attacks on the country’s economy is expected to cost several hundreds of pounds.

Therefore, the demand for robust security software is stronger than ever. Below is a detailed review of 3 cybersecurity stocks listed on the London Stock Exchange – Kape Technologies, NCC Group and Darktrace. 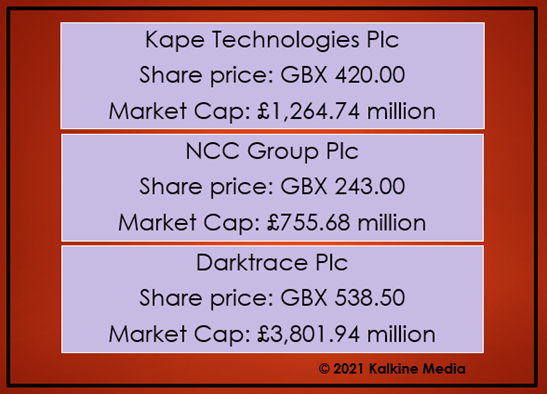 NCC Group’s board declared a final dividend of 3.15 pence per share to shareholders.

Darktrace is a provider of AI-power cybersecurity solutions. It debuted on the London Stock Exchange (LSE) in May 2021. The company announced expansion into the attack prevention and proactive security AI capabilities segments by the end of 2021.