discoverIE Group Plc (LON: DSCV), a company engaged in designing, manufacturing, and supplying customised electronics, announced the takeover of Logic PD Inc., also known as Beacon EmbeddedWorks for a cash consideration of £58.8 million ($80.5 million), and Antenova Limited for £18.2 million, with the aim of expanding in the US and UK markets. 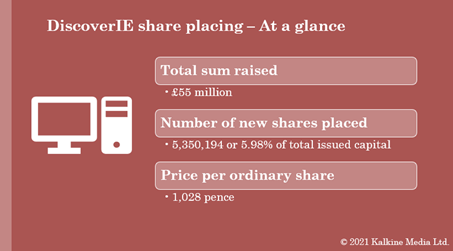 The company’s shares soared around 15 per cent following the news.

Guildford-based discoverIE raised a total of £55 million ($76.1 million) through share placing, more than it previously expected. The electronic-components manufacturer decided to increase the value of the placing following high investor demand and strong near-term opportunities in its acquisition pipeline. On 2 September 2021, the company announced that it would raise around £45 million.

Details of the acquired companies

Beacon is an American firm engaged in manufacturing, designing and supplying customised System on Module (SOM) embedded computing boards and related software for the industrial, medical, and aerospace & defence markets. The company’s revenues stood at £20.5 million ($28.1 million) for the financial year ended 31 December 2020, and EBITDA was recorded at £5 million ($6.8 million).

Antenova is a UK-based company engaged in designing and manufacturing antennas and radio frequency (RF) modules for industrial connectivity applications. Antenova expects sales for the current year to be £8.0 million and EBITDA to be £2.3 million.

High demand for modernisation of existing IT infrastructure and the growing need to comply with changing business requirements is expected to drive continued demand for electronics. Investors looking to gain exposure to fast-growing stocks in the electronics sector can consider investing in this stock as the company plans to expand its footprint in two major electronics markets of the world – the US and the UK.